Skip to content
PrevPreviousLoudspeaker prayers, Coach Staley, a praying judge and a jailed Nigerian freethinker
NextAbortion is being criminalized in the United StatesNext

Anti-vax cases in the military are baseless 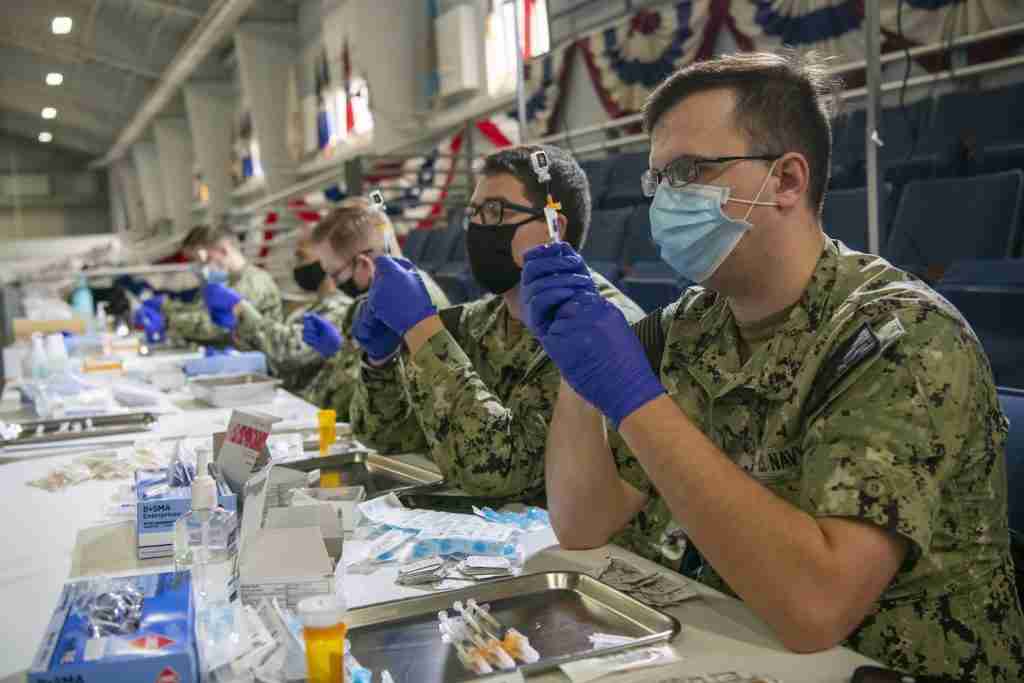 This blog is the second installment in a series examining legal challenges to vaccine requirements based on religion. Click here for the first installment.

Recent challenges to Covid-19 vaccination requirements for members of the military highlight some troubling trends: Anti-vaxxers are pressing their beliefs as “religious” in court, and the courts seem poised to entertain such challenges.

In the latest round of legal battles over vaccine requirements and religion, the U.S. Supreme Court has done the right thing and granted the secretaries of Defense and Navy a temporary reprieve from lower court orders relating to Covid vaccinations. In Austin v. U.S. Navy SEALs, the court provided limited relief to both commanders of U.S. military forces.

Navy SEALs who sued and refused Covid-19 vaccinations because of religious reasons (many of them predicated on extremist anti-abortion ideology) can continue to remain unvaccinated. However, under the Supreme Court’s order, the Navy is now permitted to consider their “vaccination status in making deployment, assignment and other operational decisions.” In sum, the anti-vax Navy plaintiffs can continue to disobey vaccination orders from their commanders, but the commanders, during a deadly pandemic, are no longer required to deploy them and expose other service members on ships, submarines or abroad.

A district court judge and the 5th U.S. Circuit Court of Appeals seemingly found no problem with telling military commanders how to do their jobs. In a brief before the Supreme Court, Solicitor General Elizabeth Prelogar called the district court’s order “extraordinary.” Prelogar wrote that the court’s order required the Navy to assign and deploy the plaintiffs “notwithstanding military leaders’ judgment that doing so poses intolerable risks to safety and mission success.”

A number of other challenges to military vaccination orders are working their way through the courts, with the anti-vax plaintiffs largely winning so far. In Florida, a district court judge granted a preliminary injunction against vaccine requirements related to service members in the Navy and Marine Corps. In Georgia, a President Trump-appointed judge likewise granted an injunction  to an Air Force officer.

Two aspects of these cases are especially troubling from a legal perspective.

First, conservative judges are readily using their judicial power to illogically tell the commander in chief and the military how to conduct their affairs. As the Biden administration convincingly argued in court: “It is the executive officials charged with protecting our national security and defending our borders — not courts — who have authority to determine service members’ fitness for duty and assignments.”

The hypocrisy of our judicial system is on full display when you consider that the Supreme Court upheld Trump’s “Muslim ban” in Trump v. Hawaii. There, the court had no problem finding that the president had substantial authority to make determinations related to immigration and national security. (FFRF filed a brief in the case arguing that the discriminatory ban violated the Establishment Clause).

Second, these military cases include a grab bag of anti-vaxxers who seek the shelter of heightened protection under the “religion” label. The reason for this is because the Religious Freedom Restoration Act conveniently supplies added protection. Under this law, a plaintiff challenging federal action that allegedly burdens their “exercise of religion” forces the government to meet a very high standard.

In one case, a plaintiff asserted that she could not receive a vaccine that was “derived from or tested on aborted fetal tissue in its development.” She also contended that to receive a vaccine of “a novel substance of unknown long-term effects” would violate her belief that her body is “the temple of the Holy Spirit.”

In the Navy SEALs case, the plaintiffs asserted the abortion claim as well, but also put forth beliefs that “modifying one’s body is an affront to the Creator, divine instruction not to receive the vaccine, and opposition to injecting trace amounts of animal cells into one’s body.”

In another case, the plaintiffs expounded a bizarre litany of beliefs. A Navy chaplain claimed that receiving a Covid-19 vaccine “would be an act of irreverence toward God.” Another plaintiff contended that “it would be a sin as a violation of the Holy Spirit’s leading and direction.” A female contractor asserted in court that “no long-term studies have been performed on any of the Covid shots regarding their impact on female fertility, and given her religious beliefs about marriage and childbearing, cannot receive any of the Covid shots.”

Readers may scoff at these anti-vax excuses as contrary to reason, science or even the person’s own stated religion. Those are valid criticisms. However, our federal courts seem largely uninterested in analyzing whether “religious” claims are sincerely held for anything but the most egregious situations.

Generally, courts are not permitted to delve into the validity or consistency of someone’s religious beliefs (including whether the plaintiffs are properly following their own stated religion). That principle has now morphed into a near presumption that such beliefs are sincerely held by plaintiffs and not being abused for ulterior motives. For example, in the Covid-19 vaccine cases, many of the service members claiming a religious objection have never claimed such an objection to other vaccines. Largely, the plaintiffs have nonreligious beliefs about vaccines, but have strategically asserted that those beliefs are “religious.”

As these cases make their way through our courts, military commanders may succeed in overturning lower court injunctions against the military’s Covid-19 policies. But that is too little and too late. The ultimate fix is for Congress to repeal the Religious Freedom Restoration Act so these cases cannot be brought before the courts in the first place.

Patrick Elliot, the Foundation's Senior Litigation Counsel, hails from St. Paul, Minn. Patrick received a degree in legal studies and political science from the University of Wisconsin-Madison (2005). He attended the University of Wisconsin Law School and received his Juris Doctor in 2009. He joined FFRF as a staff attorney in 2010. Patrick oversees litigation for FFRF, including important First Amendment cases involving religion in schools, religious displays, and free speech violations. Patrick is admitted to practice in Wisconsin, Minnesota, the U.S. Supreme Court, and many federal district and circuit courts around the country. Patrick has served as the Chair of the Civil Rights & Liberties Section of the State Bar of Wisconsin (2020). He has helped plan and present educational programs for lawyers on civil rights issues.
All Articles by this author
PrevPreviousLoudspeaker prayers, Coach Staley, a praying judge and a jailed Nigerian freethinker
NextAbortion is being criminalized in the United StatesNext