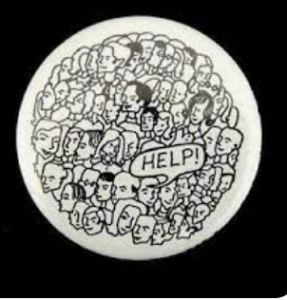 The world human population reached a record 8 billion people on Nov. 15. Let that sink in, because it should be cause for concern. In the year 1800, there were 1 billion humans. It’s predicted we’ll be 9 billion within 15 years and 10 billion by 2058. Someone needs to say STOP!

When I was lucky enough after high school to backpack through Europe in the spring of 1975, there were 4 billion people on our planet. I was shocked upon revisiting Paris 40 years later to witness the change! As we fought crowds and stood in huge lines for hours to enter Paris’ fabled museums and sightseeing spots in Amsterdam, I figured some of the tourism was due to something good: increasing wealth around the world, more people with the wherewithal to travel, etc. Later, I realized there was also another reason: The global population had almost doubled since I’d last seen these sights, from 4 billion to 7.3 billion people. Overtouristing is becoming a major problem around the world and it happened in less than my lifetime.

Whether or not our species can create technology and use human ingenuity to accommodate our growth, it is still going to be at the expense of so much of what makes our planet and our human societies pleasurable and valuable. There is just too much of a good thing when it comes to humanity.

While only those of a certain ilk continue to deny human-caused climate change, there are many who accept climate change who never think about the role overpopulation is playing in destroying our habitats. Yet human population growth is a root cause.

Elon Musk, one of those population deniers and, incidentally, a father of eight, irresponsibly tweeted last summer that “population collapse due to low birth rates is a much bigger risk to civilization than global warming.” The gospel of growth is taken at face value by so many. Our U.S. economy is utterly dependent on consumerism, and more people means more consumption. What’s not to like, economists ask.

Well, it is that very consumption by those of us living in wealthy nations that’s most responsible for human-caused climate change. We Americans heat our homes with gas and oil, drive mostly gas-powered cars, travel frequently in gas-powered airplanes, and purchase copious amounts of clothing, and food — one-third of which goes to waste, creating methane in our bulging landfills. The United States, along with China, is one of the two worst emitters of climate-changing gases. It stands to reason that the more of us there are, driving cars and maintaining our comfortable standards of living, the more we Americans contribute to climate change.

We are seeing the dismaying impact of climate change in our own country (“new normals” in temperature extremes, flooding, hurricanes and wildfires). But it will be the poorer nations that suffer the most immediately from our actions (or rather, inaction). Look at Pakistan, where one-third of the country has recently been underwater. This is unprecedented flooding, affecting 33 million people, killing 1,700 and creating untold misery. Pakistan emits less than 1 percent of global emissions, yet is among the 10 countries most affected by climate change. This has led Pakistani Minister of Climate Change Sherry Rehman to insist that wealthier countries owe reparations. Another such case is Somalia, which is suffering both from religion-based conflicts and climate change, including its worst drought in history. It is in the midst of a horrible famine worsened, if not created, by climate change.

Just some days ago, the responsibility of wealthier nations toward poorer nations was debated at  the COP25 meeting in Egypt. The United States had been among many industrialized countries that committed to giving $100 billion a year by the year 2020 to alleviate climate inequities, and which failed to meet that goal. President Biden has now pledged $100 million to the Adaptation Fund, to help prepare developing nations to manage climate change. The big question will be whether Congress, which is full of climate change deniers, will allow that to happen.

As we humans blithely obey the biblical injunction to be “fruitful and multiply,” we endanger other species on our shared planet. The World Wildlife Fund issued a startling report this year showing that the population of most major animal groups — mammals, birds, amphibians, reptiles, fish — has dropped by nearly 70 percent since 1970. Where is the angst and concern over this heartbreaking announcement? Researchers predict almost half our species could be extinct in 50 years due to climate change. The religious concept that humans are the center of the universe, that a creator gave us “dominion … over every living thing that moveth upon the Earth” (Genesis 1:28) is surely at least partly responsible for humanity’s blasé response to the harm our species is creating. Patriarchal religion’s insistence that women exist simply to procreate and that “every sperm is sacred,” as Monty Python puts it, ensures that  misery will continue in poorer nations. (By definition, a society is overpopulated if it cannot ensure its people have adequate food, housing, clean water, air and access to nature.)

We ignore our impact on other species at our peril. Not only do we diminish the richness and bounty of nature and sully our beautiful planet, but self-interest should also propel conservation efforts that include slowing population growth. Human encroachment leaves our species vulnerable to disasters, such as mudslides and flooding because we’re building where we shouldn’t, and even facilitates the spread of new diseases and plagues, such as Covid-19.

As humanists, isn’t it our duty to leave our world and planet a better place than we found it? If we’re truly “1 in 8 billion,” we ought to be doing a better job of slowing our population growth for the sake of our planet and future generations.

Annie Laurie Gaylor is co-president of the Freedom From Religion Foundation. She co-founded FFRF in 1976 as a college student with her mother Anne Nicol Gaylor. She served as the editor of FFRF’s newspaper, Freethought Today, from 1985-2009. She became FFRF co-president with Dan Barker in 2004. Annie Laurie has authored three books for FFRF: Woe to Women: The Bible Tells Me So; Woe to Women: The Bible Tells Me So; and Women Without Superstition: “No Gods – No Masters”, the first anthology of women freethinkers.
All Articles by this author
PrevPreviousGuide: How to Communicate about Abortion
NextLet’s support fact-based abortion care centers this Giving TuesdayNext