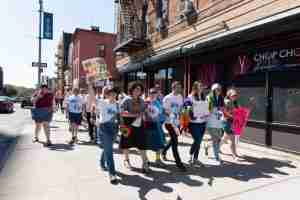 The fight for LGBTQ-plus rights and for the protection of the separation of state and church are inextricably linked.In an ongoing installment of this fight, we have the judicial tussle involving Yeshiva University, one of the largest Modern Orthodox Jewish universities in the United States, and a group of brave LGBTQ-plus students known as the Yeshiva University Pride Alliance.

As a Modern Orthodox Jewish institution, Yeshiva University holds the official viewpoint that LGBTQ-plus acceptance is contrary to the teachings of the Torah, and that approving an LGBTQ-plus student group would interfere with its instruction in Torah values.

With how rapidly the situation is changing, it can be hard to keep up, but here’s what we know about the lawsuit:

In 2019, LGBTQ-plus students at Yeshiva came together to try and build a community and a recognized student group by following the procedures that the university had outlined. Yeshiva University then rejected the Pride Alliance’s request for club approval three times, stating that the club violated Yeshiva’s religious values, prompting the university’s Pride Alliance, along with current and past students, to submit a lawsuit against the institution in April of last year. A New York trial court issued a permanent injunction, requiring Yeshiva to recognize the Pride Alliance. It stated that Yeshiva’s primary purpose is education, rather than religious worship, and therefore the university is subject to the New York City’s Human Rights Law regulation.

When higher state courts refused to stay the ruling, Yeshiva University escalated the matter to the U.S. Supreme Court, claiming that it “cannot comply with that order because doing so would violate its sincere religious beliefs about how to form its undergraduate students in Torah values.” On Sept. 9, Justice Sonia Sotomayor issued an order that temporarily allowed Yeshiva to continue to refuse to recognize the Pride Alliance until a further order could be issued from either herself or the Supreme Court as a whole.

Five days later, on Sept. 14, the Supreme Court vacated that order, stating that at this point in time, emergency relief from the court was inappropriate, as Yeshiva has at least two other avenues for expedited or interim relief in the state court system. That means that legally speaking, Yeshiva must recognize the Pride Alliance, at least until either a state court says otherwise, or they exhaust all other options in order to allow them to appeal to the Supreme Court. While this was a temporary win for the Pride Alliance and their ability to be recognized, the court did essentially provide a step-by-step guide for the university to follow a path that could lead them to the Supreme Court. Justice Samuel Alito outright stated in his dissent that should they follow that path, it is likely that they will win, noting on page four of the decision: “At least four of us are likely to vote to grant certiorari if Yeshiva’s First Amendment arguments are rejected on appeal, and Yeshiva would likely win if its case came before us.”

Rather than follow the court order, however, Yeshiva University made a very clear statement: If we aren’t allowed to discriminate against one student organization, then we won’t have any student organizations at all. In an unsigned email sent out to all undergraduate students on Sept. 16, the university suspended all undergraduate club activities “while it immediately takes steps to follow the roadmap provided by the U.S. Supreme Court to protect YU’s religious freedom.”

This nuclear approach is unsurprising to anyone who has watched the reactions of religious institutions to being told that discrimination is unacceptable. Just last month, the Archdiocese of St. Louis pulled its schools out of federally funded lunch and milk programs for low-income families. The Archdiocese claimed that a U.S. Department of Agriculture memo was not clear enough when it stated that religious schools would not have to apply for an exemption from new LGBTQ-plus discrimination guidelines. This approach makes it clear that the Archdiocese would rather risk vulnerable children going hungry than be faced with even the slightest possibility that they could be prevented from discriminating against LGBTQ-plus students.

The Archdiocese at least had the commitment to withdraw from receiving taxpayer dollars in return for its ability to discriminate, unlike Yeshiva, which has received $1 million in federal tax dollars to renovate one of its buildings, over $5 million in COVID-related higher education emergency relief grants, and even more in the form of federal student loans, not to mention the many tax breaks it receives as a not-for-profit educational institution.

Time is a flat circle, and this is no exception. Katie Rosenfeld, one of Yeshiva University Pride Alliance’s lawyers, likened the university’s reaction to the responses of white supremacist governments during the civil rights era, which as a matter of course ordered public pools to be shut down rather than comply with desegregation orders. Just as such efforts further inflamed community divisions in the Deep South, all this move ultimately serves to do is pit Yeshiva’s undergraduate students against one another and creates an even more hostile environment for LGBTQ-plus students on the Yeshiva campus. This tactic, unfortunately, may be working in Yeshiva’s favor; on Sept. 21, the Pride Alliance offered to delay seeking formal recognition while the case plays out, in exchange for all other club activity being allowed to resume.

Perhaps the real kicker here is that the religious belief being used to justify rejecting LGBTQ-plus student groups on the Yeshiva campus is somehow limited to only its undergraduate division. Yeshiva’s law school, the Cardozo School of Law, has long had an active chapter of OUTLaw, an affinity organization dedicated to provided extremely similar community space to Yeshiva’s LGBTQ-plus and allied law students and whose activities are advertised prominently on the Diversity and Inclusion section of their website. Their medical school is home to Einstein PRIDE, which publicly advocates for LGBTQ-plus students, faculty, staff and allies. Yeshiva claims that religious instruction is a key part of its undergraduate curriculum, qualifying it for an exception to the New York City Human Rights Law regulation as a place of religious worship, rather than an educational institution, but how can an institutional religious belief apply to one division of a university, but not others?

The students of the Yeshiva Pride Alliance, like all LGBTQ-plus students, deserve the equal access and dignity guaranteed to them by law, and no university or religious institution should be able to stand above that law.

ABOUT THE AUTHOR
Kat Grant (they/them) joined the Freedom From Religion Foundation as an Equal Justice Works Fellow (sponsored by the Wm. Collins Kohler Foundation) in September 2022. Their fellowship project focuses on state/church issues that specifically impact the LGBTQ-plus community. Kat first worked for FFRF as an intern while attending law school at the Indiana University Maurer School of Law. Originally from southern Indiana, they received their B.A. in political science from Indiana University Bloomington in 2019, and graduated with their Juris Doctor from IU Maurer in May 2022.