Why is Christian terrorism downplayed in the U.S.?

When Muslims commit violence against the innocent to further their ideological or political agenda, they are called, appropriately, “Muslim terrorists.” But when Christians do the same, they are rarely called “Christian terrorists.” Why not? 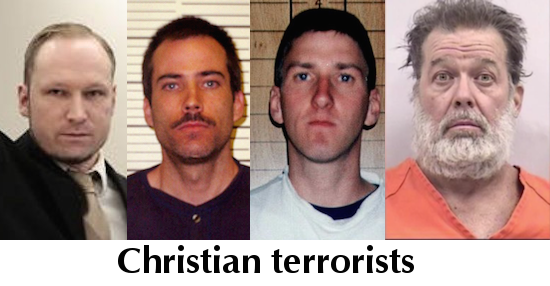 The FBI deems terrorism “the unlawful use of force or violence against persons or property to intimidate or coerce a government, the civilian population, or any segment thereof, in furtherance of political or social objectives.” [Emphasis mine.] By that definition, Robert Lewis Dear, the North Carolina Baptist who is accused of killing three people and wounding nine in a shooting rampage last week at a Planned Parenthood clinic in Colorado Springs with an alleged ideological purpose, should be called a “Christian terrorist.”

So should many others, like Eric Rudolph, the “Olympic Park Bomber” who committed a number of anti-abortion and anti-gay-motivated bombings in the 1990s which killed two people and injured over 120 others; Timothy McVeigh, the Roman Catholic who bombed the Federal Building in Oklahoma City in 1995, killing 168 people and wounding more than 600; and Anders Behring Breivik, the Norwegian Lutheran who killed eight people in 2011 with a bomb in Oslo, then shot dead 69 participants at a youth summer camp in order to protect his country from a Muslim takeover.

But so far, I have not seen anyone in the mainstream media use the phrase “Christian terrorist” to describe a Protestant or Catholic who commits terrorism.

Why the double standard? Is it because everybody “knows” that true Christians would never do such a thing? Is it because “they” are bad but “we” are good? “Their” criminals represent a morally corrupt system, but “our” criminals are acting on their own, outside the true faith?

There seems to be a simplistic tendency, especially among “true believers,” to treat a grammatical equality like the commutative law in math. Since “2 + 3” equals “3 + 2,” then “Muslims are terrorists” equals “terrorists are Muslims” in some minds. We see this fatal fallacy in Christians who decide that all Muslims must be evil. If they allowed themselves to put the words “Christian” and “terrorist” in the same phrase, they might imagine they are conceding that Christianity embraces terrorism. So they avoid the phrase, and the responsibility.

We also have an instinctive tendency to demonize the enemy while celebrating our own tribe. Whenever the Christian European “settlers” won a battle against the “aggressive” native Americans, it was called a victory, but when the Indians won, it was called a massacre. It is easy to call strangers “terrorists.” It is almost impossible to do that with your own in-group.

Everybody “knows” that true religion is peaceful and nonviolent. But what everybody knows is not necessarily what is true. I am not the first to comment on the double standard, but I think the reason we should call violent believers terrorists is not because they represent a lunatic fringe, but because Judaism, Christianity and Islam are, at their core, ideologies of violence.

Jesus admitted as much: “Do not think that I have come to bring peace to the earth; I have not come to bring peace, but a sword.” (Matthew 10:34, NRSV) “Whoever does not abide in me is thrown away like a branch and withers; such branches are gathered, thrown into the fire, and burned.” (John 15:6, a verse responsible for the burning of nonbelievers.)

At the National Prayer Breakfast this year, President Barack Obama said, “No God condones terror.” He claimed that the Islamic State is “warping” religion: “As people of faith, we are summoned to push back against those who try to distort our religion—any religion—for their own nihilistic ends.”

But Obama, like most Christians, is the one who is distorting his religion. In the bible, his own deity actually uses the word “terror” to describe his intentions:

“A terror from God fell upon the cities.” Genesis 35:5 NRSV

“. . . all the great terror which Moses shewed in the sight of all Israel.” Deuteronomy 34:12 KJV

“The terrors of God are arrayed against me.” Job 6:4 NRSV

“They shall be in great terror, for God is with the company of the righteous.” Psalms 14:5 NRSV

“I will make them an object of terror and of plunder.” Ezekiel 23:46 NRSV

The God of the bible is a self-confessed terrorist.

“I will punish the world for its evil. . . . Whoever is caught will fall by the sword. Their infants will be dashed in pieces before their eyes; their houses will be plundered and their wives ravished. . . . they will have no mercy on the fruit of the womb; their eyes will not pity children.” Isaiah 13:11–18 RSV

“Thus saith the Lord of hosts . . . Now go and smite Amalek, and utterly destroy all that they have, and spare them not; but slay both man and woman, infant and suckling.” 1 Samuel 15:2–3 KJV

“Samaria shall become desolate; for she hath rebelled against her God: they shall fall by the sword: their infants shall be dashed in pieces, and their women with child shall be ripped up.” Hosea 13:16 KJV

Hundreds of bloodthirsty verses like these are splattered across scripture, as documented in Ruth Hurmence Green’s The Born Again Skeptic’s Guide to the Bible and my book GOD: The Most Unpleasant Character in All Fiction. The biblical Israelites were “God-fearing terrorists” as they stormed their way across Canaan, murdering, raping, pillaging, destroying altars, burning entire cities as commanded by Yahweh. So were the Crusaders and Inquisitors. The Catholics and Protestants during the Thirty Years War were Christian terrorists killing each other. The KKK, the anti-semitic Nazis, the Romanian Iron Guard, the Ugandan Lord’s Resistance Army, the Lebanese Maronite anti-Muslim militia, and so on, were Christians who committed violence against innocent people “in furtherance of political or social objectives.”

The Army of God, an American anti-abortionist group that advocates the use of violence, is described by Wikipedia as “a Christian terrorist” organization. NARAL Pro-Choice America president Ilyse Hogue, in a statement last month calling for a tougher investigation of anti-abortion violence, wrote: “The media need to report these incidents as what they are: domestic terrorism.”

Not all believers are bad, of course. Most religionists, like most nonbelievers, are good people. But when some of them take their lethal religion seriously and perform horrific acts against humanity, we should tell it like it is. A Christian motivated by faith to commit terror is a Christian terrorist.

Dan Barker is co-president of the Freedom From Religion Foundation. A teenage Christian evangelist, he got ordained, pastored in three churches, and did missionary work in Mexico, had a musical ministry and graduated from Azusa Pacific College majoring in religion. Barker preached the gospel for 19 years before he “just lost faith in faith.” Now Dan is an advocate for reason and freethought. He has participated in more than 120 debates, including at Oxford University. Dan has authored seven books including: Godless: How An Evangelical Preacher Became One of America’s Leading Atheists with a foreword by Richard Dawkins; Losing Faith In Faith: From Preacher To Atheist; Life Driven Purpose: How an Atheist Finds Meaning with a foreword by Daniel C. Dennett; and God: The Most Unpleasant Character in All Fiction with a foreword by Richard Dawkins. He’s also written three freethought books for children including Just Pretend. He’s produced three albums of freethought music released by FFRF.
All Articles by this author
PrevPrevious‘Hateful rhetoric fuels violence’
NextHollywood star tries to teach atheists on Twitter, gets schooledNext