Why Christianity is collapsing 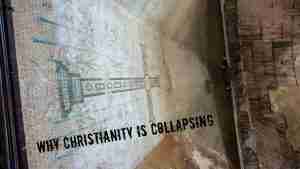 We are living through a historic culture change that many of us oldsters weren’t sure would ever happen. Christianity is collapsing in Western democracies with astounding speed. The long-awaited Secular Age is rolling like a juggernaut. Freethought efforts finally are winning the day.

Christianity remains strong in tropical places, where millions “speak in tongues” and exhibit holy-roller behavior. But it is disintegrating in America, Europe, Canada and Australia. Soon, Christians will be a minority in the West. Hurrah. Intelligent scientific thinking now dominates — not supernatural fairy tales.

Why did this great transformation arrive in our lifetime? Many explanations have been offered.

Several sociologists contend that Western life has improved so much — with prosperity, health care, job security, few wars, modern comforts, good pensions and better education — that people no longer need to hope for rewards after death. When couples stop going to church, their children grow up without being indoctrinated.

Some scholars like Mary Eberstadt, author of How the West Really Lost God, suggest that the sexual revolution curtailed much of the patriarchal family, leaving fewer traditional households to fill church pews. Others, such as computer scientist Allen Downey, say the rise of the internet, with its great power to spread skeptic messages, has helped fuel the decline.Yet others have reasoned that never-ending sex scandals involving priests and ministers have taken their toll. And it is frequently observed that the intense involvement of white evangelicals in narrow-minded politics has alienated millions of moderate young Americans.

For instance, each human personality — all 8 billion of us — is created by our huge brain, the most complex object in the universe. When the brain dies, along with the body, it’s unlikely that the psyche can come out of the corpse and travel to a hereafter. The personality simply dies with the brain. So, church promises of heaven are vaporous.

Undoubtedly, all these factors pushed the profound transition we are watching. It’s mostly a phenomenon of young adults. As old churchgoers die off, they are followed by young generations who say their religion is “none.”

Christianity, which shaped our world for millennia — causing crusades, inquisitions, witch hunts, Catholic-Protestant wars, pogroms against Jews and Anabaptists, burning of “heretics,” blasphemy trials and the like — is quickly retreating before our eyes.

Sixty years ago, philosopher-historian Will Durant wrote in The Age of Reason Begins:

“Is Christianity dying? Is the religion that gave morals, courage and art to Western civilization suffering slow decay though the spread of knowledge, the widening of astronomic, geographical and historical horizons, the realization of evil in history and the soul, the decline of faith in an afterlife and of trust in the benevolent guidance of the world? If this is so, it is the basic event of modern times.”

Durant’s prophecy seems to be coming true at last.

James A. Haught, syndicated by PeaceVoice, was the longtime editor at the Charleston Gazette and has been the editor emeritus since 2015. He has won two dozen national newswriting awards and is author of 12 books and 150 magazine essays. He also is a senior editor of Free Inquiry magazine and was writer-in-residence for the United Coalition of Reason.
All Articles by this author
PrevPreviousYeshiva University’s ‘nuclear approach’ a display of bigotry
NextBad governors and teachers, essay winners, unwarranted legal defeat, and atheist activismNext