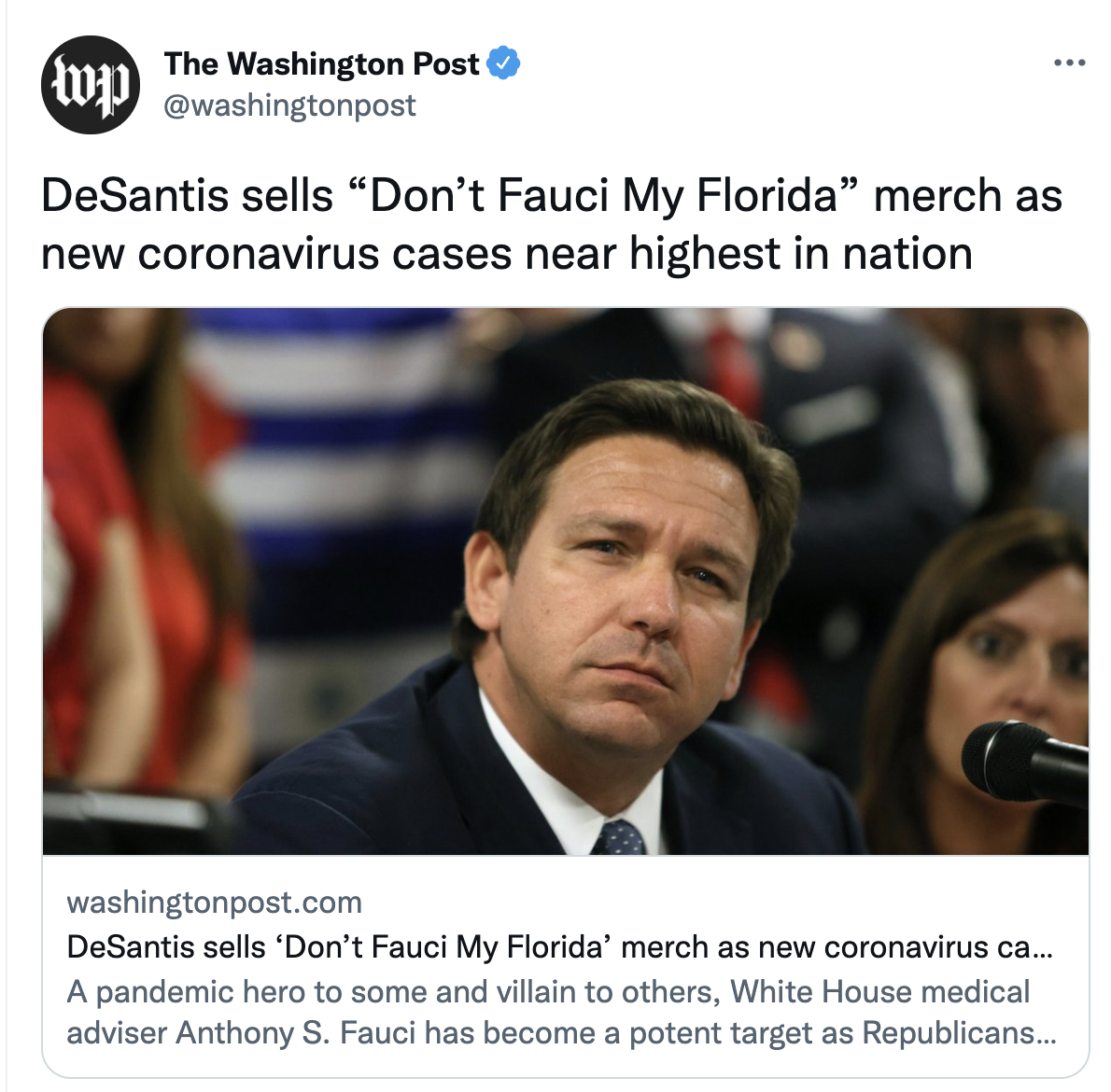 While the Supreme Court axed the best hope for defeating the spread of Covid — the Biden Administration’s OSHA rules — it is at least a secular blessing that it has permitted the self-evident need for a vaccination mandate for federal healthcare workers. (Because if someone wants to be in healthcare, the least they can do is not give a patient Covid if they can help it.)

What a sad commentary on the state of acceptance of medical science in the United States that less than half of the country — 21 states and the District of Columbia — had previous to this ruling mandated Covid-19 inoculations for healthcare workers. Even worse, consider that at least 27 states are involved in one or more lawsuits against the federal vaccine mandates.

Most of this resistance comes down to partisan politicking. The divide has brought out the latter-day “Know-Nothings,” including public officials who’ve positively swilled the anti-vax Kool-Aid. These state public officials and legislators have seemingly made it their mission in the name of religious freedom to do their damndest to spread the virus in the midst of our nation’s greatest Covid-19 spike yet.

Special awards for anti-science denial belong to several governors with the worst records on Covid — who all fall into the Christian nationalist camp — and who have been actively sabotaging efforts to stop the spread:

Amid a Covid surge shattering old records in his state, Gov. Ron DeSantis maintained a steady silence about Florida’s spike in infections. But he has found time to taunt Dr. Anthony Fauci, use “Don’t Fauci Me” T-shirts to raise funds for his campaign and recently called to imprison this humanist bastion of science and reason. (Fauci’s critics are legion among ultra-extremists at the state or federal level. Fauci called out U.S. Senator Rand Paul on the Senate floor for stirring up “the crazies” who are making threats on his life. Rand isn’t the only such senator cashing in on campaigns by making false claims about Fauci.)

During the worst of the spike, DeSantis appeared at a New Year’s Eve celebration at a Miami Christian concert, where he claimed, “I’m glad we’re going to be able to celebrate the new year in the freest state of the United States.”

Following last week’s ruling by the Supreme Court upholding Biden’s healthcare requirement, DeSantis even castigated Supreme Court Justice John Roberts and Justice Brett Kavanaugh for having “no backbone,” and announced he won’t enforce the requirement, saying it had created an “insane situation.”

What DeSantis calls the “freest state in the union” has some of the most draconian prohibitions against vaccinations and masking. Florida now:

—Prohibits private employer Covid-19 vaccine mandates, adopting a law that fines small employers who violate this “health protection” law by up to $10,000 per employee violation, and medium to larger-sized business up to $50,000 per employee. (Who’s pro-business?)
—Prohibits government entities from requiring Covid-19 vaccinations.
—Prohibits educational institutions from requiring students to be vaccinated.
—Prohibits school districts from having policies on face masks, and encourages students and parents to sue districts that adopt masking policies.
—Has sued President Biden over his vaccination mandates.

Even Trump has pointed out that DeSantis has refused to answer questions about whether he’s been boosted.

Gov. Doug Ducey’s state of Arizona has jumped to the unenviable record of being No. 3 in the nation for Covid deaths. This is no surprise, given Ducey’s outrageous anti-Covid-mitigation policies. Ducey is known to the secular community for posting on the official gubernatorial Facebook page a bible verse and greeting that “He is Risen.” His misuse of Covid funds — to penalize public schools that mask students by giving the funds to private (religious) schools that won’t mask — is so extreme that the Biden administration is threatening to revoke the funds altogether. In an opportunist raid on public funds to promote religious schools, he’s promising $10 million in relief funds to give parents up to $7,000 a year to pay tuition and education costs at private schools if their public schools close or move to remote learning.

While he has promoted voluntary vaccination in the past, Ducey’s reckless pro-Covid overreach has gone so far as to prohibit state universities from requiring masks or testing of unvaccinated students.

Like DeSantis, Texas Gov. Greg Abbott — whom FFRF is successfully suing over his discrimination against nonbelievers and who has told FFRF “not to mess with Texas,”  — claims to be pro-business, yet has barred business owners from requiring vaccinations. He’d previously barred any governments or school districts from mandating vaccinations. He has sued the Biden administration for requiring vaccinations for members of the Army National Guard, and joined the other lawsuits against Biden’s healthcare and OSHA requirements. It’s no surprise that omicron is surging across Texas.

Abbott and Texas Attorney General Ken Paxton, both religious fanatics, even got a constitutional amendment passed by voters last fall that exempts churches from emergency measures, claiming it violates the Establishment Clause.

Georgia Gov. Brian Kemp once (with inadvertent humor) told a Christian reporter, “I knew that God had a plan for me, but I just didn’t know exactly what it was until after the election.” He vociferously fought Covid-19 mitigation efforts by the mayor of Atlanta throughout the pandemic, and issued an executive order in August to ensure businesses don’t have to comply with local Covid-19 measures such as masks and vaccination mandates. He panderingly unveiled the “Faith Protection Act” to ensure that emergency powers cannot be used to “specifically limit the practice of any religion.”

In early 2021, he sued to challenge the Biden administration’s Head Start vaccine and masking mandate, as well as being party to the newest lawsuits over healthcare mandates and OSHA requirements.

“I will absolutely not be implementing any measures that shutter businesses or divide the vaccinated from the unvaccinated or the masked from the unmasked,” Kemp has announced amid the omicron spike in his state.

Tennessee Gov. Bill Lee wears religion on his sleeve, has mandated a day of prayer, promoted and signed an early abortion ban now under appeal and endorses “faith-based initiatives.” A former state health department employee (who had been fired for doing her job in promoting vaccinations) accused Lee of putting his personal religious views over the roll out of the J&J Covid 19 vaccines. After OSHA issued its November rule requiring large employers to adopt vaccine mandates (now blocked by the Supreme Court), Lee signed into law a legislative package severely limiting schools, health agencies and businesses from requiring proof of vaccination and restricting school masking to extreme surges. It also allows workers to collect unemployment benefits if they refuse a vaccine. Tennessee is suing Biden over vaccine mandates for employers.

Lee went so far as to invite unvaccinated out-of-state cops to join Tennessee’s highway patrol (you can’t make this stuff up).

Montana Gov. Greg Gianforte
​​
Gov. Greg Gianforte was the first governor in the nation to sign a law prohibiting private businesses from requiring vaccinations in the workplace, and some other measures limiting the power of local health departments. He’d previously discouraged local school boards from implementing masking mandates. All of this, even after he contracted Covid in April 2021. In claiming Biden’s OSHA mandate was illegal in Montana, he wrote, “Vaccine passports, or any documentation related to an individual’s vaccination status, are unwarranted infringements on our liberties and illegal in Montana.” (This is more than ironic given that Gianforte has signed seven pieces of antiabortion legislation with unwarranted infringements on pregnant women’s liberties.)

The wealthy governor is a fundamentalist whose Gianforte Family Foundation gives to theopolitical and Christian nationalist groups, including Focus on the Family, the Alliance Defending Freedom, the Family Research Council and others of similar ilk. He has donated more than $4 million to the Grace Bible Church in Bozeman, his family’s church, and the pastor spoke at his inauguration.

Freedom to get Covid

As California state senator and pediatrician Richard Pan has explained: “In politics, if someone wins with 60 or 70 percent of the vote, they’ve crushed their opponent. But in vaccination, that’s not nearly enough. You have to get to the upper 80s and 90s in percentages to keep people safe, and there just aren’t many ways to get 90-plus percent of people to do anything voluntarily. That’s where mandates come in, and generally, they’ve been effective.”

This partial list of public executives who’ve put their anti-science religious convictions above science and the public welfare could go on and on, but you get the picture.

So here sits the United States in the midst of the latest Covid-19 surge, suffering record numbers of infections and hospitalizations, and with barely 63 percent fully vaccinated, and only 24 percent boosted. Here we are with a majority of state legislatures rejecting the obvious utility, need and efficacy of vaccination mandates. Worse, a super-majority on the Supreme Court has ignored more than a century of high court precedent related to vaccinations during epidemics and rejected the patently clear right of the federal government to enact broad inoculation mandates.

Who’s views are insane, governors and justices? It does appear that the inmates are running the asylum.

Annie Laurie Gaylor is co-president of the Freedom From Religion Foundation. She co-founded FFRF in 1976 as a college student with her mother Anne Nicol Gaylor. She served as the editor of FFRF’s newspaper, Freethought Today, from 1985-2009. She became FFRF co-president with Dan Barker in 2004. Annie Laurie has authored three books for FFRF: Woe to Women: The Bible Tells Me So; Woe to Women: The Bible Tells Me So; and Women Without Superstition: “No Gods – No Masters”, the first anthology of women freethinkers.
All Articles by this author
PrevPreviousMorality evolved — too late for Alan Turing
NextWe need to talk about abortionNext