White evangelicals are a political curse 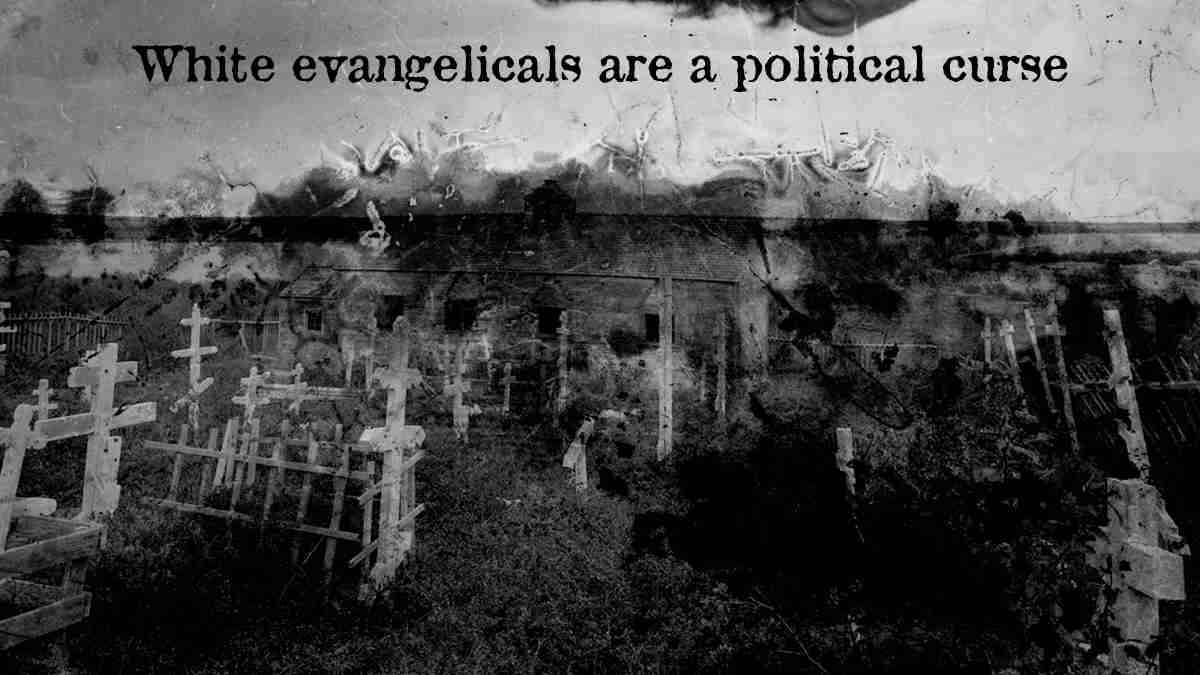 Every person who remembers his school poetry knows that the Ancient Mariner was forced to wear a dead albatross around his neck.

America’s Republican Party wears a dying albatross: white evangelicals who are both the GOP’s life-support system and also a curse upon Republicans.

The party couldn’t survive without hidebound born-again whites — yet those fundamentalists taint the GOP by forcing it to adhere to their narrow-minded agenda: hating gays, hating abortion, hating Hollywood sex, hating evolution, hating the separation of church and state, hating Muslims, hating foreigners and minorities, hating sex education, hating secularism, etc. etc. However, white evangelicals are shrinking relentlessly as religion dies in America, so the future of the party is bleak.

Currently, such believers are the heart of the GOP, giving it at least three-fourths of their vote. In contrast, young Americans who say their religion is “none” — a group that is swelling rapidly — hold strong progressive views and generally support the Democratic Party. Most of them are repelled by the Religious Right.

“More Bad News for the Survival of the Republican Party” reads the headline of a Washington Post column by Jennifer Rubin. She outlined how the nation’s share of white evangelicals is dropping rapidly in the 21st century. Some surveys find them as low as 13 percent of the adult populace. Rubin begins:

Republicans have made a demographic bet: By artificially inflating the white percentage of the electorate (by throwing up barriers for poor and nonwhite Americans to vote) and driving white Christian turnout sky-high with a combination of cultural resentment and xenophobia, they figure they can extend the lifespan of their increasingly rural, male, non-college-educated base. After a while, however, you run out of white evangelicals. That is precisely what is happening at an unexpectedly speedy pace.

In other words, the GOP possibly seems doomed because it cannot live without bigoted white born-agains — yet those Puritans are slip-sliding away, year after year. If her forecast is correct, Republicans may be dragged from power as their fundamentalist base recedes.

A Pew 2019 survey found that one-third of young adults raised in white evangelical households quit the faith. Religion scholar Diana Butler Bass has said, “The percentage of white evangelicals is declining … a shrinking demographic.” So many have left hidebound religion that they’ve created an online movement called “Exvangelicals.”

That’s why Newsweek reports: “Only 10 percent of Americans under 30 identify as white evangelicals. The exodus of youth is so swift that demographers now predict that evangelicals will likely cease being a major political force in presidential elections by 2024.” Robert Jones of the Public Religion Research Institute echoes this sentiment, “If current trends hold steady, 2024 will be a watershed year — the first American election in which white Christian voters do not constitute a majority of voters.”

As for now, remaining fundamentalists are intensely loyal to the GOP, and vote in extremely high numbers — while “Nones” tend to have low political commitment and vote meagerly. But it seems likely, eventually, someday, that the GOP base will erode. Jones of PRRI summed up: “There will ultimately be a breaking point to just how overrepresented this group can remain as the demographics continue to shift.”

It’ll be fascinating to watch the dying albatross fulfill the curse.

This column has been adapted from a piece originally written for Daylight Atheism on Jan. 6, 2020.

James A. Haught, syndicated by PeaceVoice, was the longtime editor at the Charleston Gazette and has been the editor emeritus since 2015. He has won two dozen national newswriting awards and is author of 12 books and 150 magazine essays. He also is a senior editor of Free Inquiry magazine and was writer-in-residence for the United Coalition of Reason.
All Articles by this author
PrevPreviousKennedy v. Bremerton — what the case will mean for students’ rights
NextAbortion rights, Supreme Court, Putin’s Church and an illustrious illustratorNext