When thinking is made a crime 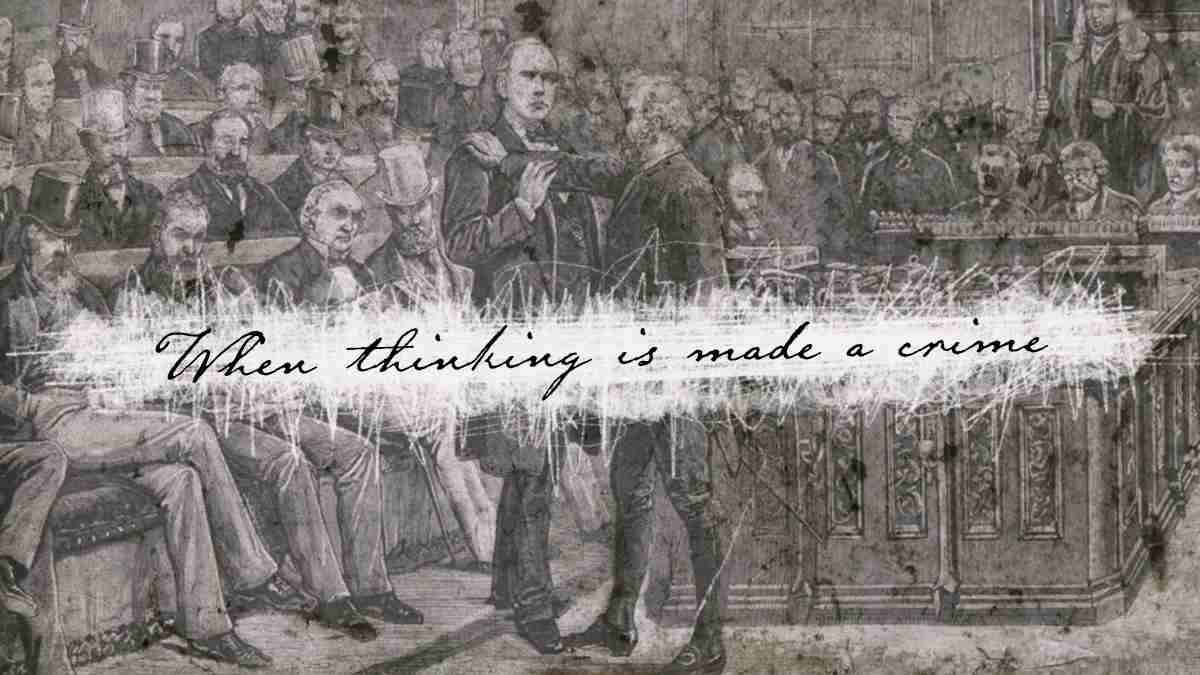 Blasphemy laws are a global scourge even in our era, as a recent report demonstrates. And they have an unfortunately long history.

As prehistoric tribes evolved into early civilizations, tribal shamans were succeeded by elaborate priesthoods claiming to represent hundreds of magical gods. Priestcraft became a complex profession and gained enormous power over societies. Temples and sacrifices dominated many cultures. Shrewd men learned that they could live in luxury, instead of toiling like the rabble, if they were seen as conveyors of the holies.

“The first divine was the first rogue who met the first fool,” Voltaire wrote.

One way to guarantee the high status of priests was to inflict severe punishment on anyone who might question their supernatural connections. Thus blasphemy laws were born.

In ancient Greece, some of the first scientific thinkers were accused of “impiety” punishable by death. The list includes Socrates, Anaxagoras, Protagoras, Alcibiades, Andocides, Diagoras, Theophrastus, Prodicus and even Aristotle. Stilpo of Megara, charged with saying that Athena was “not a god,” joked at his trial that she was a goddess instead. Aspasia, brilliant mistress of ruler Pericles, was charged, but Pericles tearfully won her acquittal.

Arrival of The Enlightenment gradually erased the church’s power to kill people. But blasphemy laws still sent nonconformists to prison.

A historic deadlock — a standoff between two irreconcilable worldviews — was created in the 1790s when America adopted the Bill of Rights assuring individual freedoms. The First Amendment guarantees free speech, free press and freedom of religion. It’s the heart of democracy, letting everyone voice any view, including criticism of religion. It’s in direct conflict with blasphemy laws that mandate punishment of those who doubt the supernatural.

Even after the Bill of Rights was law, some states continued to outlaw criticism of religion. In 1879, a Maryland law asserted: “If any person, by writing or speaking, shall blaspheme or curse God, or shall write or utter any profane words of and concerning our Savior, Jesus Christ, or of and concerning the Trinity… shall be imprisoned not more than six months.”

A famous case involved P.T. Barnum before he became a circus tycoon. As a teenager, he started a weekly Connecticut newspaper, The Herald of Freedom, that denounced Calvinist “blue laws” against Sabbath work. His attack on church elders caused a libel prosecution that put him in jail for two months. Upon release, the budding showman staged a welcome-home parade for himself.

England’s laws required all officeholders to swear a religious oath “on the true faith of a Christian.” Freethinker Charles Bradlaugh, president of the Secular Society and publisher of a skeptic newspaper, was elected to Parliament in 1880, but refused to swear the oath. He was jailed briefly and expelled from the House of Commons, then won subsequent re-elections, and finally was seated in 1886. He and his secular colleagues had to fight various blasphemy charges.

The clash between free speech and blasphemy prosecution cannot be resolved. It ends only when religion fades so much that too few believers remain to be outraged by questioning. Witty British writer and Catholic apologist G.K. Chesterton wrote in 1905: “Blasphemy depends on belief and is fading with it. If anyone doubts this, let him sit down seriously and try to think blasphemous thoughts about Thor.”

He does have a point there.

This column has been adapted and updated from a piece originally written for the January 2018 issues of the United Coalition of Reason Newsletter.

James A. Haught, syndicated by PeaceVoice, was the longtime editor at the Charleston Gazette and has been the editor emeritus since 2015. He has won two dozen national newswriting awards and is author of 12 books and 150 magazine essays. He also is a senior editor of Free Inquiry magazine and was writer-in-residence for the United Coalition of Reason.
All Articles by this author
PrevPreviousHow to talk about the Supreme Court opinion leak
NextFive things you need to know about the Supreme Court draft abortion opinionNext