Skip to content
PrevPreviousNot fooling around on April Fools’ and Easter
NextSavior of the Everglades: Marjory Stoneman DouglasNext

When a major Supreme Court victory is just the beginning

As the nation reflects on the 50th anniversary of Martin Luther King’s assassination today, we also mourn the loss of another legendary civil rights activist, Linda Brown, who died last week. As a little girl in 1954, she was at the center of  one of the most consequential cases in the history of the Supreme Court: Brown v. Board of Education. In Brown, the court unanimously declared that segregated schools were unconstitutional, and Brown kept fighting to desegregate schools throughout her life.

But why did Linda Brown dedicate her life to a fight she’d supposedly already won?

Because court rulings cannot change minds. Oppressors will fight to retain their privileged status and the belief that they are inherently “better” than others. A Supreme Court ruling is unlikely to ever resolve a serious civil rights issue by itself.

Linda Brown’s legal battle only ended formal racial segregation in public schools, striking down the disgraceful “separate but equal” doctrine upheld in the 1896 case, Plessy v. Ferguson. After 1954, states could no longer designate a “white” school and a “colored” school. Frustratingly, though, even after a solid decade of judicial strong-arming, racism and segregation were so entrenched in southern public schools that they were largely able to defy the Brown ruling, only making significant progress in desegregation after the passage of the Civil Rights Act of 1964.

Most school districts in the South did not want to be seen as willfully violating the letter of the law, so they came up with ways to technically comply with Brown v. Board while maintaining segregation in practice. The most common schemes Southern school districts adopted were “freedom of choice” desegregation plans, which gave families the option to change their children’s enrollment to a different school. White families refused to enroll their children in disfavored “colored” schools, and non-white families were understandably reluctant to drop their kids into a sea of racist teachers, administrators and parents by enrolling their children in “white” schools. “Freedom of choice” was just a euphemism for a segregation, very much like the modern concept of “school choice” is a euphemism for funding religious schools with public dollars.

The problem was not confined to Southern states. Brown v. Board had little legal effect in the North because Northern public schools were never segregated by law. Instead, Northern states used more insidious means to segregate their public schools so severely that they became the most segregated in the country — and still are today.

The biggest driving force behind segregation in the North was, and is, segregated housing. Due to both private redlining and a variety of government policies, northern neighborhoods became increasingly segregated after the ’50s. School enrollment was then “neutrally” determined by neighborhood, leading to schools that were as segregated as their local neighborhood, without technically violating Brown v. Board.

Thus, Linda Brown’s fight continued long after her Supreme Court victory. In 1979, she even filed another court case, also titled Brown v. Board, this time as a parent of students in the same segregated school district. She won again.

Linda Brown’s story is a somber reminder that prejudice is slow to change, however the Supreme Court interprets our constitutional rights. As civil rights activists, we have to guard against insidious methods that perpetuate the old status quo while technically complying with the law.

Racism in the United States is a uniquely awful problem, but the kind of surreptitious resistance to the Brown v. Board decision has been repeated in the fights for other major civil rights. For instance, while tremendous gains have been made in LGBTQ rights over the past two decades — culminating in the Supreme Court’s decisions in Lawrence v. Texas and Obergefell v. Hodges — homophobes and LGBTQ opponents are despereatly seeking to regain their license to discriminate against LGBTQ persons. One measure to that effect has been proposed in Congress: the grossly misnamed “First Amendment Defense Act,” which would legalize discrimination against people in same-sex relationships whenever that relationship conflicts with the religious beliefs of an individual, business or government employee (the Freedom From Religion Foundation has vigorously fought to oppose this bill and others like it).

In the area of civil rights law that I practice — state/church separation — we see similar trends. Over the past few decades, the Supreme Court has had some very solid, clear decisions holding that the Establishment Clause prohibits the government from preferring or endorsing religion in general, or any particular religion — McCollum v. Board of Education (1948), Lemon v. Kurtzman (1971), Lee v. Weisman (1992), and Santa Fe v. Doe (2000), just to name a few involving public schools. Nevertheless, theocratic government actors (almost invariably Christian) regularly defy these rulings by using their public position to advance their personal religion.

For example, in Lee v. Weisman, the Supreme Court said that public schools cannot invite clergy to say prayers at the graduation ceremony.  In response, many state legislatures are urging school districts to select a student — from a Christian-majority student body — to replace the unconstitutional Christian prayer with “remarks” of the student’s own choosing that the school typically will not review. We have received reports that teachers or administrators speak privately with these students to make sure they understand that everyone expects a Christian prayer. The result is the perpetuation of the old system, while the school district can smugly claim they are complying with the law.

Other times, we see outright defiance of the law. For instance, Santa Fe v. Doe halted prayers being broadcast over the loudspeaker at a public school’s football games, specifically including “student-led” prayer. Nevertheless, we still see many schools continue to pray over their loudspeakers at football games. (Why is it always football?) This obstinacy does not come from a differing constitutional understanding, but rather from an arrogant confidence that no one in the community will risk being alienated and ostracized by challenging the practice with a lawsuit.

This is why the the tireless work of the Freedom From Religion Foundation is so vital. Even if we were to win every case, and win them at the Supreme Court, FFRF would still have plenty to do. Linda Brown taught us that progress is a lifelong struggle, because the bannermen of the status quo will drag their feet every step of the way. But FFRF, with your support, is vigilant, prepared, and always willing to fight for the First Amendment and your rights. 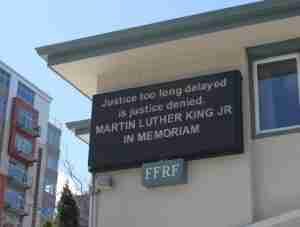 Ryan Jayne received a B.A. in philosophy from the University of Wisconsin-Milwaukee Honors College in 2007. He attended law school at Lewis & Clark in Portland, Ore., where he served as an associate editor for the Animal Law Review at Lewis & Clark and co-founding the Pacific Northwest’s first Secular Legal Society. Ryan graduated cum laude in 2015, began working with FFRF in January of 2015, and became a Diane Uhl Legal Fellow in September 2015, specializing in faith-based government funding. Ryan became an FFRF staff attorney in September 2017 and is a member of FFRF's Strategic Response Team, spearheading FFRF's state-based legislative advocacy.
All Articles by this author
PrevPreviousNot fooling around on April Fools’ and Easter
NextSavior of the Everglades: Marjory Stoneman DouglasNext