What you can do to help stop hundreds of new, awful bills around the country 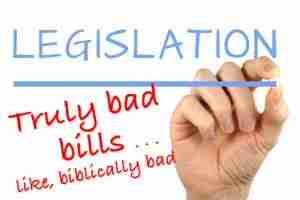 Christian nationalists and theocrats have unleashed a torrent of hostile bills in state legislatures around the country that secularists must oppose.

State capitols are abuzz with troublemaking activity. In many instances, the aim is to rush bills through with minimal public input. This is an intense blitz, so now is the time to get active. Whatever you do, don’t get complacent! If you care about keeping religion out of your government, take a deep breath and get ready to help.

Below, you will see some of the worst offenders — ranging from dangerous to dangerously idiotic — along with advice on what you can do to help. The Freedom From Religion Foundation is currently tracking 465 bills that have an impact on our work. And more pop up every day.

Protecting the right to superspread

Many states are considering bills to curtail attempts by responsible state executives to contain the pandemic. Legislation is being introduced to stop the government from limiting in-person worship services, even though we know that the best way to stop this virus is to prevent superspreader events where groups of people are indoors together for extended periods of time, doing things like talking, shaking hands and singing. Unfortunately, the U.S. Supreme Court has implausibly analogized such a scenario to shopping at a liquor store, giving the green light to state lawmakers to follow suit by ignoring science and carving out a religious exception that will lead to infection and risk deaths not only of churchgoers, but also their families and neighbors.

One example of a particularly broad and egregious bill in this vein is Utah’s HB 184, which prevents emergency orders from applying to church gatherings and clergy who visit hospital patients, thus allowing them to spread the virus from bed to bed under a false narrative of religious freedom. Make no mistake: Anyone who votes in favor of such a bill is sacrificing American lives.

Thou shalt not violate the Establishment Clause

A North Dakota bill, SB 2308, aims to display the Ten Commandments in public schools, even though the Supreme Court has ruled such displays unconstitutional. The bill doesn’t specify which version of the Ten Commandments: the usual Deuteronomy 5 (if so, the Protestant or Catholic version?) or Exodus 20 or maybe even Exodus 34, the only text that the bible itself refers to as the “Ten Commandments.” (If a school went with the Exodus 34 version, would parents complain when they realize their children are being warned not to “cook a young goat in its mother’s milk” and told that all blood sacrifices must be yeast-free?)

It goes without saying that legislators pushing this bill want the same version of the Ten Commandments installed in public schools that they believe in, and that they learned about in Sunday School. Which is to say they want to impose their personal religious beliefs onto every public school student in the state. This is flatly unconstitutional.

The motto In God We Trust, imposed on our secular nation during the height of the McCarthy era, is still some lawmakers’ preferred solution to all of the country’s problems. Akin to giving a pandemic-ridden populace a lifetime subscription to “thoughts and prayers,” bills like New Mexico’s SB 246 aim to make sure the inaccurate motto is posted everywhere possible in lieu of doing anything productive.

New Mexico’s version of this bill goes even further than others we’ve seen in the past, and would require that the phrase be displayed in every government building and on vehicle registration cards.

Show me the bad bills!

Missouri has never had a shortage of bad state/church bills. So far this year, it has produced dozens of them (as well as a handful of good bills, to be fair). These include massive expansions of nonmedical vaccine exemptions at a time when just the opposite is sorely needed; attempts to criminalize abortion (a common trend throughout the country); promoting the presence of concealed-carry guns in churches; voucher-like programs that would decimate public schools; and a third attempt at a ghastly bill that aims to stop judges from protecting the identity of state/church plaintiffs.

I testified against this last bill in person in 2019 (which, fortunately, did not pass then), since it is a direct attempt to “out” Missourians who would dare challenge the unconstitutional promotion of Christianity in the government. It’s hard to imagine a bill that is more clearly hostile to the First Amendment.

North Dakota’s HB 1476 is 10 pages of densely packed garbage, detached from reality and the law to a degree seldom seen, but it gives you a flavor of what we’re up against. Among other things, the bill:

· Categorized those with anti-LGBTQ beliefs as “nonobservers of the religion of secular humanism”;
· Defined the term “secular marriage” to mean exclusively opposite-sex marriage, and sought to ban all other marriages in the state;
· Equated gay pride flags with sectarian religious flags;
· Asserted that the state “prohibiting or unduly restricting conversion therapy” would violate the Establishment Clause by endorsing secular humanism, as would recognizing the existence of transgender individuals;
· Suggested that public schools should warn parents that comprehensive sex ed classes may “expose their child to licentiousness and one particular worldview”;
· Singled out the harmless Drag Queen Story Hour (although the bill got the name wrong) as an unacceptable promotion of religion; and
· Closed with the epistemological gem that “It is not proven whether sexual orientation is predicated on immutability and genetics and is therefore a matter of religious faith … ”

That’s a small sample of the absurdities packed into one bill. Fortunately, the bill died three days after being introduced. The bill’s author and only sponsor, state Rep. Terry Jones — an unfortunate namesake for the hilarious and recently deceased Monty Python actor and director — is certainly a villain to keep an eye on in the future, although he may be incapable of writing a bill that any other lawmakers can get behind. While defending another bill he recently introduced, Jones reportedly “stated that Black Americans are ‘glad their ancestors were brought here as slaves.’”

The big question: What can I do?

The above examples are just a few snowflakes in the avalanche of bills churning through state legislatures. The volume is the point. It’s meant to overwhelm and create paralysis. That’s precisely what many of these legislators are counting on. Don’t give in.

Instead, remember that the breakneck pace of these bills is a temporary sprint and demands a temporary redoubling of energy to resist them. Here are things you can do:

1) If you aren’t signed up for FFRF’s action alerts, please do so. If you are already an FFRF member, you will be sent action alerts in your area provided we have your current email address and you haven’t opted out. Otherwise, you can sign up by starting a trial membership for free or texting “FFRF” to 52886. But please consider supporting our work by joining. We’ll do the heavy lifting of tracking bills in your state and letting you know when we think is the best time to put some pressure on lawmakers. We’ll even give you some sample talking points and directly connect you with your legislators via phone or email. All you need to do is decide that this is important enough for a few minutes of your time to help keep your government secular.
2) When you see a bill that you care about in your state, speak up! Be a squeaky wheel.
3) Tell your representatives what you think. Even if there aren’t specific bills that they can take action on at the moment, you can proactively request a few minutes of their time to share your general thoughts.
4) Attend virtual hearings. A silver lining of the Covid-19 era is that many legislative bodies will now allow you to testify from the comfort and safety of your home.
Write op-eds in your local newspaper. Many local outlets are hungry for intelligent, local insight into what’s going on. This influences your local legislators. A bonus: If  you get published and mention a bill with its name and number, anyone searching for that bill online will find your take on it.
5) Use social media to encourage others to get active. Arguing online may not be worth the time and energy required, but it is easily worth a few minutes to tell your friends and family that they can help with something you care about. You multiply your effect if you bring others with you.

Freedom depends on freethinkers, and we cannot do our important work without you. Thank you for helping the Freedom From Religion Foundation in our vital work to ensure that reason and our secular Constitution prevail.

Ryan Jayne received a B.A. in philosophy from the University of Wisconsin-Milwaukee Honors College in 2007. He attended law school at Lewis & Clark in Portland, Ore., where he served as an associate editor for the Animal Law Review at Lewis & Clark and co-founding the Pacific Northwest’s first Secular Legal Society. Ryan graduated cum laude in 2015, began working with FFRF in January of 2015, and became a Diane Uhl Legal Fellow in September 2015, specializing in faith-based government funding. Ryan became an FFRF staff attorney in September 2017 and is a member of FFRF's Strategic Response Team, spearheading FFRF's state-based legislative advocacy.
All Articles by this author
PrevPreviousChristian Nationalism, preachy groups, cults and an Atheist Republic
NextScience always defeats religionNext