Skip to content
PrevPreviousEaster, churches & the coronavirus — and distracting you from the pandemic
NextSecular voters, Easter interventions, music videos and TV interviewsNext

What bible classes will not teach you 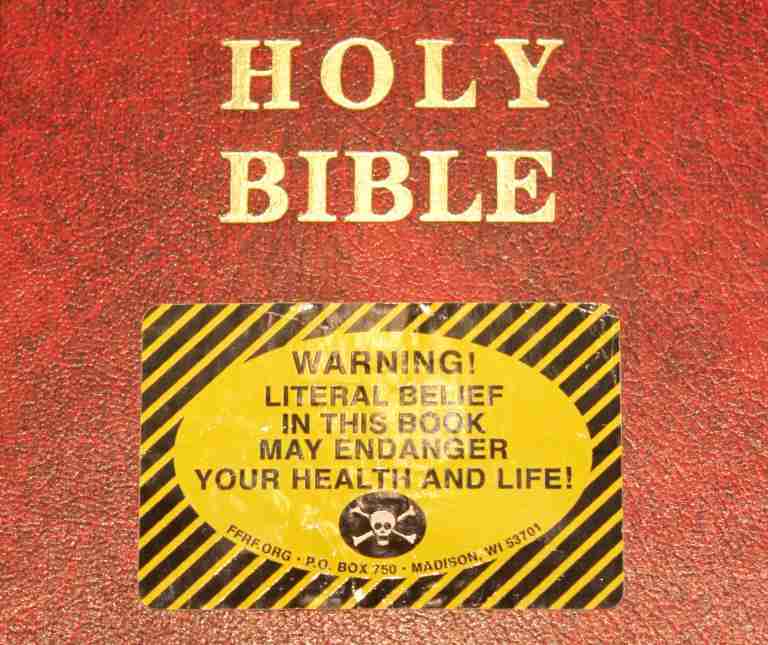 Here in Appalachia’s Bible Belt, lawmakers are attempting to have public school children study the bible — without fully realizing the implications.

The West Virginia Legislature recently voted to start bible classes in the state’s public high schools, and Gov. Jim Justice signed it into law on March 25.

I wonder how such classes will handle a number of biblical commands.

First, the bible decrees that gay males must be killed. Leviticus 20:13 says:

“If a man also lie with mankind, as he lieth with a woman, both of them have committed an abomination; they shall surely be put to death; their blood shall be upon them.”

Imagine classroom disputes that could erupt between bible-believing students and others. (Oddly, lesbians aren’t mentioned.) Now that the United States allows same-sex marriage, would classes conclude that the country officially violates the bible?

Next, the bible decrees that those who work on Sunday must be killed. Exodus 31:15 decrees: “Whosoever doeth any work in the Sabbath day, he shall surely be put to death.” Exodus 35:2 is almost identical.

Would teachers apply this mandate to police, firefighters, doctors, nurses, hospital aides, paramedics, snowplow drivers, power repair crews, bus drivers, airline crews, radio and television staff, store clerks and others who must work on Sundays? What about cooks and waitresses serving Sunday food? Come to think of it, ministers and church organists work on the Sabbath, don’t they?

The 22nd chapter of Deuteronomy commands that brides who aren’t virgins must be taken to their fathers’ doorsteps and stoned to death. (But non-virgin grooms aren’t mentioned.) With millions of unwed American couples living together, will students debate whether the execution decree applies to females among them?

The bible also endorses slavery. Leviticus 25:44 says: “Both thy bondmen, and thy bondmaids, which thou shalt have, shall be of the heathen that are round about you; of them shall ye buy bondmen and bondmaids.” Exodus 21:7 gives rules when “a man sell his daughter to be a maidservant.”

In 1 Samuel 15, God commands Hebrew soldiers to attack a neighbor tribe “and utterly destroy all that they have, and spare them not; but slay both man and woman, infant and suckling, ox and sheep, camel and ass.” Numbers 31 does likewise, with this exception: “But all the women children, that have not known a man by lying with him, keep alive for yourselves.”

Would classes apply these decrees to U.S. soldiers today?

Many other bible sections contain similarly controversial commands. The West Virginia legislators who voted to have bible taught in schools don’t seem to have studied the book themselves.

This article is an update of a write-up in the June-July 2018 edition of Freethought Today, the Freedom From Religion Foundation’s newspaper.

James A. Haught, syndicated by PeaceVoice, was the longtime editor at the Charleston Gazette and has been the editor emeritus since 2015. He has won two dozen national newswriting awards and is author of 12 books and 150 magazine essays. He also is a senior editor of Free Inquiry magazine and was writer-in-residence for the United Coalition of Reason.
All Articles by this author
PrevPreviousEaster, churches & the coronavirus — and distracting you from the pandemic
NextSecular voters, Easter interventions, music videos and TV interviewsNext