We’ve been celebrating here at the Freedom From Religion Foundation. 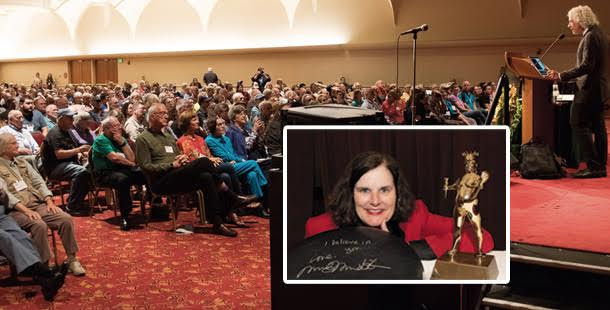 You can catch all these special moments now on FFRF’s YouTube channel. You can listen on our weekly radio show to the first interview Pinker has done about his book. And our “Ask an Atheist” feature this week consists of highlights from the convention, with more to come next week.

Raising an alarm on religious politicking 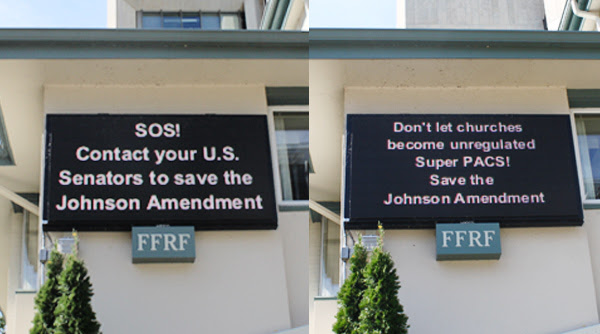 But as much as we were occupied by the national convention, we didn’t let it take up all of our energy. We filed an amended complaint in our May lawsuit against President Trump’s executive order lifting the prohibition on church politicking. “This executive order is intended to favor Christianity as the majority religion, and to favor evangelical Christians as a voting bloc Trump depends on,” said FFRF Co-President Dan Barker. And we sent out an alert to our members warning them about a parallel effort in Congress to defund IRS enforcement of the Johnson Amendment, which put the politicking proscription in place more than half a century ago. (In another national alert, we asked you to contact Congress to save death-with-dignity rights for D.C. residents.)

Just before the Sept. 15-17 convention, we filed an important amicus brief before the U.S. Supreme Court in support of the challenge to President Trump’s religion-based travel ban. The unconstitutional travel ban would create precedence that could be used to target not only religious minorities, but also the significant minority today that identifies as nonreligious, we warned.

This week, we disbursed almost $100,000 in aid money, including assistance for victims of Hurricanes Irma and Maria and of the Mexican earthquake, through NonBelief Relief, a nonreligious humanitarian agency connected with the Freedom From Religion Foundation. As we explained, Nonbelief Relief was created by FFRF’s executive board as a separate 501(c)(3) nonprofit to remediate conditions of human suffering and injustice, and to provide a charity under the banner of freethought. We’re confident it is justifying its existence.

We had two recent victories to cheer us up. We stopped prayers being broadcast before football games in an Alabama school district. “Lee County Schools have enacted the ban after an advocate organization, the Freedom From Religion Foundation, sent a notice to Lee County Superintendent James McCoy, referencing multiple Supreme Court decisions regarding school prayer,” reported a local TV station. (We love to educate folks about the Constitution.) And we halted the religious misuse of social media in Indiana.

We were further cheered by the re-airing of our ever-popular Ron Reagan ad on MSNBC’s “The Rachel Maddow Show” this week and next. “Lifelong atheist, not afraid of burning in hell,” the ad ends. Our sentiments exactly.

As always, we were busy combating brush fires. That’s why we issued an alert about New Mexico taking out mention of evolution, climate change, and the age of the Earth from its science curriculum(?!). And we asked our North Carolina members to offer support for the Charlotte, N.C., City Council’s decision to end prayers at their meetings.

We told you we were busy — mostly in a fun way. We didn’t mind. Not a bit. In fact, we loved meeting and hanging out with those of you who so kindly made it to Madison for the convention. And all of what we did was made possible only due to your generosity and support.