We’re back in fighting mode

We’re back in fighting mode at the Freedom From Religion Foundation after the celebrations last week.

Highlights from the Darrow statue inaugural

Much of our attention was recently preoccupied with the unveiling of the larger-than-life Clarence Darrow statue at the site of the legendary Scopes evolution trial in Dayton, Tenn., attended by our Co-Presidents Dan Barker and Annie Laurie Gaylor. FFRF Multimedia Producer Bruce Johnson has composed a great short video, consisting of the historical background of the trial and highlights from the event.

The battles that Darrow engaged in aren’t in the past.

“Recent studies and surveys show that between 34 and 38 percent of Americans still believe in creationism, which holds that humans were created by divine will about 10,000 years ago rather than evolving from other species over millions of years,” Cary Brunswick writes in the Oneonta, N.Y., Daily Star.

That is why we underwrote the Darrow statue. And it is why we incessantly engage in a multifront combat for science and rationality.

That’s also the reason FFRF Associate Counsel Sam Grover testified at the Wisconsin Capitol against an egregiously overreaching anti-abortion bill that seeks to prohibit University of Wisconsin employees from “performing or assisting in the performance of an abortion” blah blah blah. “Since the time of Copernicus, when the Catholic Church suppressed his heliocentric model of our solar system, religious institutions have had a long and fraught history of undermining science education that conflicts with church doctrine,” Sam stated.

Our principles compelled us to rush Andrew Seidel, our director of strategic response, into Denver to testify before a state civil rights agency on the importance of preserving a “No Aid” to religious institutions clause in the Colorado Constitution.

“The nonprofit I represent, the Freedom From Religion Foundation, exists because people disregard clear constitutional rules all the time,”Andrew said. “We get about 5,000 state-church complaints every year from all over the country.”

The specific issues before the Colorado civil rights committee was state voucher funding of religious schools, an issue we’re very familiar with because we deal a lot with religious intrusion into the education system. We notched a victory on this issue when we made a Wisconsin school district promise that its employees would not be participating in a student religious organization.

In fact, nothing raises our hackles more than religious organizations attempting to force their message on young minds — the motivation behind our alert to Milwaukee parents about an evangelical offensive starting there this week.

“The 5-Day Clubs [run by the Child Evangelism Fellowship] emphasize sin and the fact that children are sinners,” we cautioned. “The clubs shame and frighten children by telling them they’re bad, they’re sinners, and that they don’t deserve God’s love. The clubs claim the only way to escape the terrible punishment they deserve is to believe what the club tells them and to do what the club tells them to do.”

One place where we were able to keep religion away was a veterans memorial in Minnesota — but only after much unnecessary turmoil. The Belle Plaine City Council voted this week to close a public forum area at a local memorial park that had the intention of allowing a cross to remain there. We applauded the change of heart.

We also focused a spotlight on an instance in New York City of tax money subsidizing a religious institution there. “Taxpayers of different creeds — and no creed — shouldn’t be forced into subsidizing the religious activities of a sectarian church,” we said.

Talking about shining a spotlight, what better place to do that than creationist Ken Ham’s wacky ark park? When Ken Ham sold it to a nonprofit entity for $10 to avoid property taxes, we called upon the state of Kentucky to rescind sales tax subsidies. 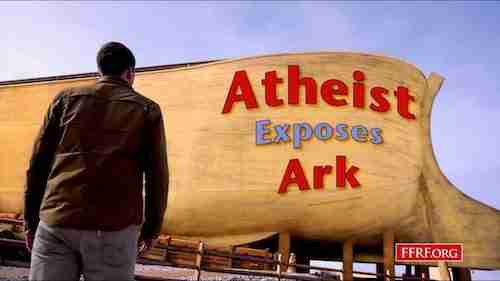 Fishing religion out of sports

We believe that religion should even be kept out of sports. That’s why we ensured that an Illinois statewide fishing competition will not be angling for religion from now on. After we learned that a Christian prayer was said at this year’s Illinois High School Association Bass Fishing State Finals, we made certain that this public sporting event will not have religion glommed on.

The past and the present, education, women’s rights, children and fishing — we skirmish on all these fronts to make our society more secular and rational, and we’re able to do it only because of you.

P.S. On our radio show this week, we talk about two areas where religion has heavily impinged on our bodily autonomy: abortion and end of life.