“We’re all Africans:” Stand against HIV/AIDS, polio, and the Catholic Church

It truly is time to quit the Catholic Church.

There are lots of exciting possibilities on the horizon for combatting HIV and AIDS. HIV vaccines are around the corner. Unfortunately, the vaccine may not help the millions of Africans condemned to this illness by the Catholic Church’s stance against condoms. This summer Roman Catholic bishops in Kenya went even further, organizing a boycott of polio vaccines. Last year, the church urged Catholic Kenyans to boycott the tetanus vaccine, claiming that it was “a covert means of controlling the country’s population.”

As always, religion is the greatest stumbling block to human progress. And it is the children who suffer the most. Ladies and gentlemen, if you are a thinking, feeling, slightly compassionate individual, it is time that you quit the Catholic Church. 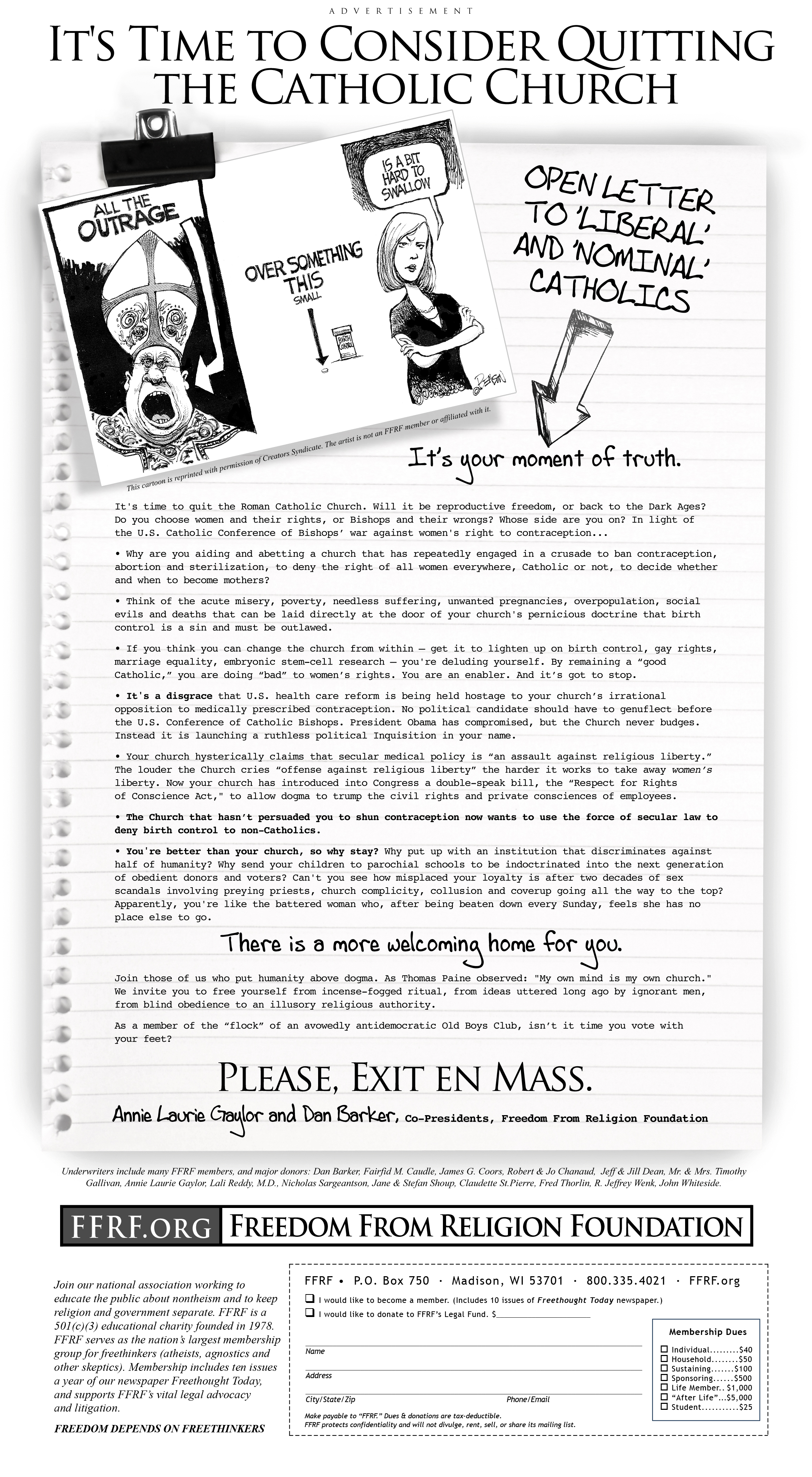 FFRF has run our “Quit the Church” ads several times, and to good effect. But the need for a mass exodus is becoming critical. The Catholic Church is killing people. Not by pulling a trigger or wielding a weapon, but by imposing Dark Age ideas on a vulnerable population.

This needs to be stated clearly: The Catholic Church is morally responsible for the deaths of millions of Africans. Those that have not died as a result of imposing this theology, the Church would now like to saddle with polio and tetanus.

Richard Dawkins is fond of pointing out that “We are all Africans.” It is time for Americans to stand in solidarity with our brothers and sisters in Africa. Bill O’Reilly, Selena Gomez, Vanessa Hudgens, Mel Gibson, Nicole Scherzinger, Denise Richards, Steve Carrell, Arnold Schwarzenegger, Stephen Colbert, Tom Brady, and other prominent “Catholics” should shun the church whose retrograde faith ensures that Africans will contract AIDS and Polio. (There have other good reasons to drop the Catholic label.)

Incidentally, even if these big name Catholics stick with their pope, many people aren’t–they are quitting en mass. More than 70 Catholic parishes in New York shut down because of low attendance, few clergy, and lack of funds. And the number of Catholic in America has plummeted from 23.9% to 20.8%, a loss of about 10 million Americans. Join them–quit the church.

Andrew L. Seidel is a constitutional attorney and the Director of Strategic Response at the Freedom From Religion Foundation. His first book The Founding Myth: Why Christian Nationalism Is Un-American was burned by a Tennessee preacher. His second book, American Crusade: How the Supreme Court is Weaponizing Religious Freedom, is due out in 2022. He's won numerous academic awards and holds two law degrees: a J.D. magna cum laude from Tulane University Law School and an L.L.M. from Denver University’s Sturm College of Law. Andrew has a B.S. in neuroscience and environmental studies from Tulane. Before dedicating his life and law degree to keeping state and church separate, Andrew was a Grand Canyon tour guide and an accomplished nature photographer. Andrew has appeared on Fox News to debate Bill O’Reilly, MSNBC, and hundreds of other media outlets speaking on behalf of FFRF.
All Articles by this author
PrevPreviousThe Christian Right’s shortsighted legal strategy actually promotes atheism and LGTBQ rights
NextBanish de facto religious tests for presidencyNext