We’ve taken on a whopper 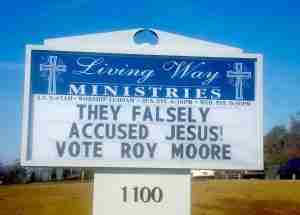 We at the Freedom From Religion Foundation work on all sorts of projects — but we recently took on one that’s quite a whopper.

FFRF Staff Attorney Patrick Elliott and Legal Fellow Chris Line sent out a report and letters to 350 (yes, you read that right) school districts all over the Midwest warning them about a particularly egregious organization: the Todd Becker Foundation.

Big media outlets such as Raw Story picked up on our work:

“A group of fundamentalist Christians is being allowed into high schools to conduct assemblies whose explicit goal is the proselytizing of their interpretation of Christianity, warns the secular advocacy group Freedom From Religion Foundation. ‘The Todd Becker Foundation targets high school students, seeking to convert them into fundamentalist Christianity,’ FFRF writes. ‘The foundation is a Christian ministry that travels throughout the Midwest putting on assemblies in public schools.’” 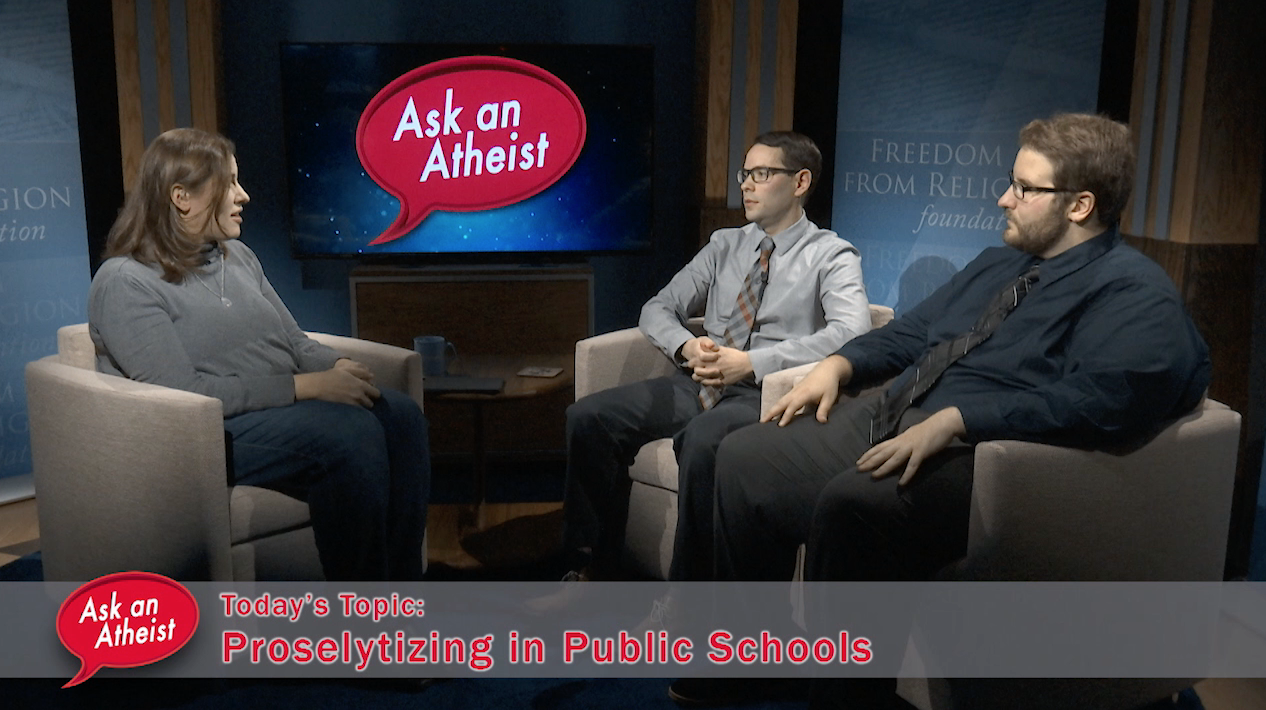 Kudos to Patrick and Chris for toiling so hard! They talk about the project and its importance on our “Ask an Atheist” Facebook live feature (we received a lot of questions!) and on our mini-sized Newsbite segment. 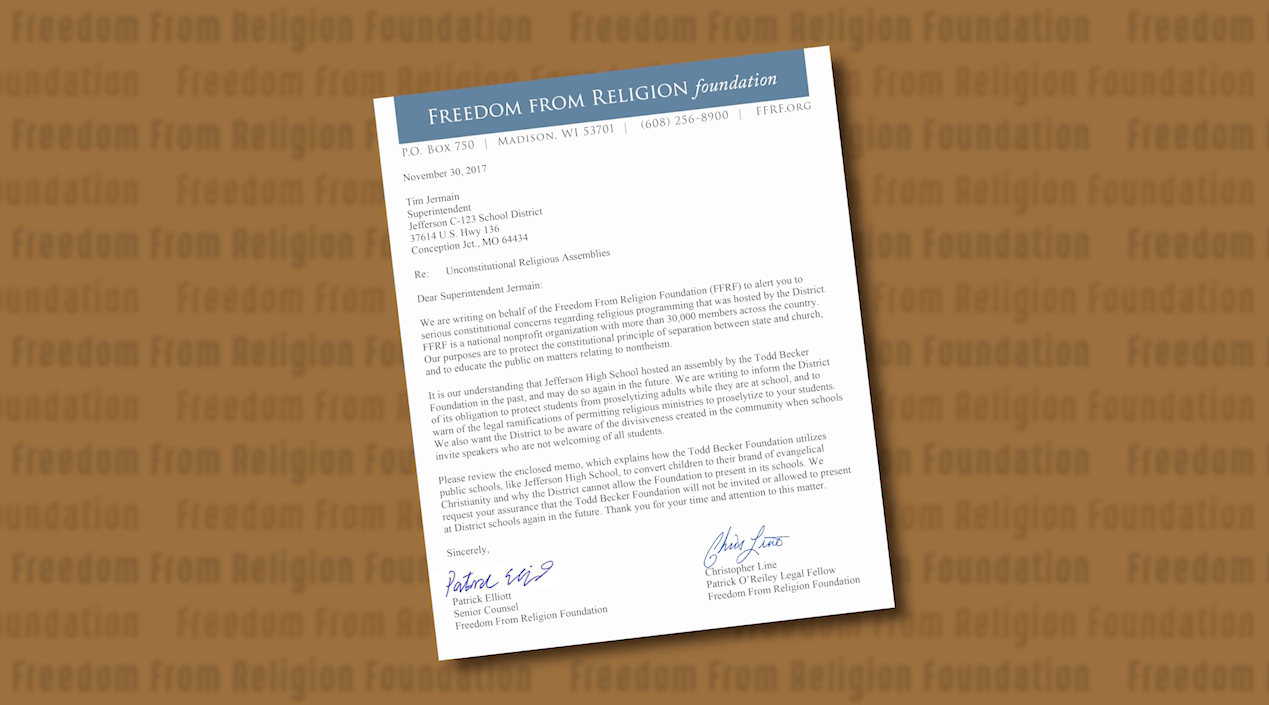 The response from the Todd Becker Foundation has been to call us a “hate group.” 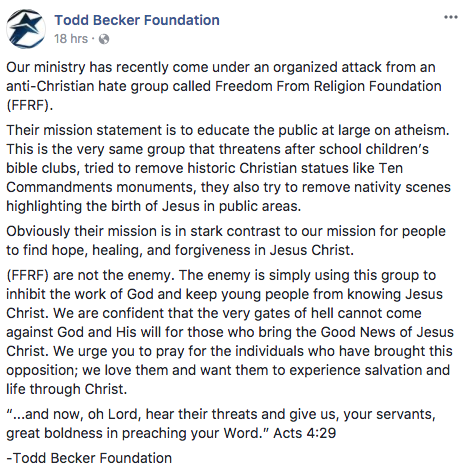 Whatever, guys. Chris is drafting a fitting response to this slander.

Moore and Moore of a project
Another big “project” of ours over the years has been current Alabama Senate candidate Roy Moore. We focused on him again this week when a church, in violation of the Johnson Amendment ban on church electioneering, publicly endorsed him.

“The Freedom From Religion Foundation is requesting an IRS investigation into an Alabama church that promoted Republican Senate candidate Roy Moore on its marquee,” a prominent Alabama news site reports. “FFRF said the sign is a violation of the Johnson Amendment that prohibits nonprofit organizations, including churches and other religious groups, from participating in political campaigns on behalf of a particular candidate.”

If Congress rescinds the Johnson Amendment in the tax bill (as per the House version), this sort of politicking will be completely legal. That’s why, yet again, we’ve asked for your help in getting the repeal blocked at this stage when the House and Senate versions are reconciled.

No public funding!
Congressionally, a perennial mission of ours has been to thwart the governmental funding of houses of worship. More the reason why we’re so alarmed by a proviso in a pending bill that allows FEMA funds to be doled out to such institutions as part of disaster relief, and it’s why we’ve asked you to assist us in defeating the measure.

Listen to us, Supremes
One venture we’ve diligently worked on that is currently of national importance is the Colorado Masterpiece bakery case, where a baker is arguing for a right to discriminate against a gay couple. We’ve filed an amicus brief siding with the gay couple and the state of Colorado, and so when the U.S. Supreme Court recently heard arguments, we asked it to pay attention to our reasoning.

Spiriting away freethinkers
Internationally, a big endeavor of ours has been to get freethinkers spirited away to safety. In our radio show this week, we interview one such person, Lubna Ahmed, who we helped relocate from Iraq to the United States after she was in hiding for more than a year following death threats. We also talk with Chris about the Todd Becker Foundation. 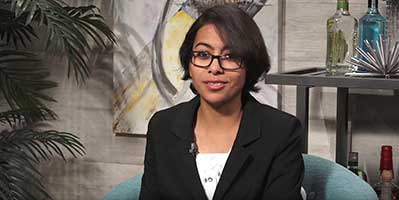 Freethinking solstice displays
Some of our projects are more whimsical. We’ve particularly had fun nationally with the freethinking solstice exhibits we put up this time of the year, most often in response to religious displays on public land. We’ve recently blanketed Illinois, notably the Chicago area but also the state Capitol, and have made our debut in the Buckeye State. And, most joyfully, we’ve erected an atheist “A” sign right outside our office here in downtown Madison, Wis.

Small but no less important
Along with our larger projects, we had plenty of small but no less important moments the past week. We put an end to an Oklahoma public school football coach’s ostentatious praying. We offered to tutor an Indiana school superintendent on the Constitution. We called out a California town for including a live nativity scene at an official Christmas tree-lighting ceremony. And we castigated the Wisconsin Department of Corrections for inviting a private evangelical university to offer a course in Biblical Studies (quote, unquote), and only “Biblical Studies.”

All of this — whether massive projects or smaller, still important stuff — was made possible only due to your membership and backing.

All Articles by this author
PrevPreviousExtremism: The Common Denominator
NextTodd Becker Foundation villifies FFRF as an “anti-Christian hate group”Next