We at the Freedom From Religion Foundation accelerated quickly on our return from Thanksgiving break.

No ‘preaching while driving’ 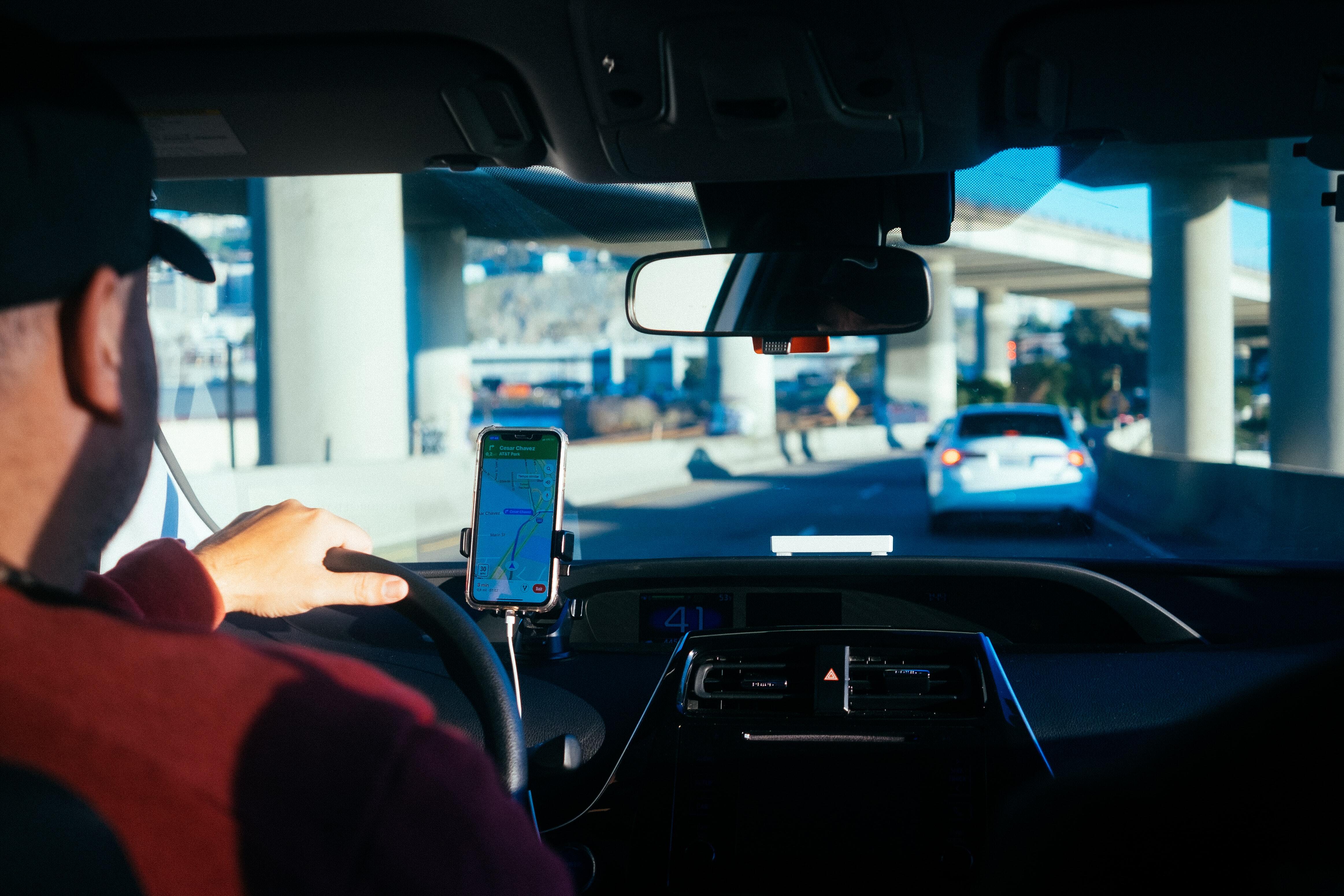 Disallow “preaching while driving,” we urged Uber and Lyft. A major AP story documents how some Uber and Lyft drivers have been directly imposing their personal religious views on unsuspecting clients. “No one should have to pay to be missionized against their will,” FFRF Co-Presidents Dan Barker and Annie Laurie Gaylor wrote to the ride-sharing companies.

Our S.C. case proceeds full steam ahead
Our case against the South Carolina state government’s proposed unconstitutional funding of a private Christian school is proceeding on course. “South Carolina won’t disburse a $1.5 million budget earmark awarded to a religious education nonprofit unless a court orders it to,” reports South Carolina’s capital newspaper. FFRF filed its lawsuit earlier this year on behalf of four S.C. taxpayers against top state officials, including Gov. Henry McMaster. 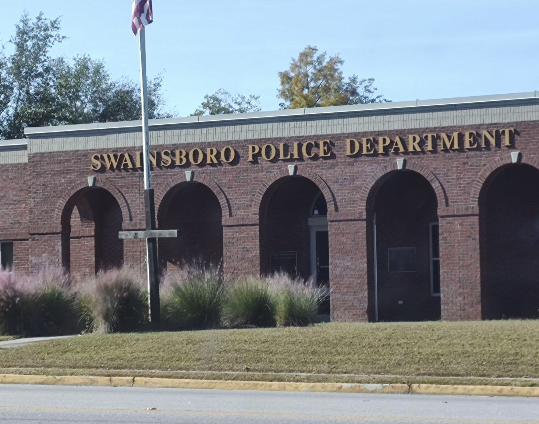 We asked a Georgia police department to remove a cross from in front of its police headquarters.  “What makes this particularly distasteful is that the Latin cross is attached to a flagpole flying the American flag, which sends an inappropriate message that to be a true American, one must be Christian,” said Annie Laurie.

Wis. clergy abuse needs full investigation
We’re urging the Wisconsin attorney general to escalate its investigation into clergy abuse. Ensuring that every potential recourse remains on the table is vital to offering healing to survivors and their families, as well as sending a message that such abuse will not be tolerated in the state of Wisconsin, we’re stressing.

Probe the Supreme Court
We joined the efforts of several national organizations to urge congressional action regarding the U.S. Supreme Court after recent startling revelations. “It is a disservice to the American people that the justices of our highest court are not bound by a code of ethics, unlike every other federal judge in the country,” states the letter spearheaded by Demand Justice, CREW and NARAL (and signed by dozens of others) that has been sent to the Senate.

Religion source of anti-LGBTQ animus
We cheered the bipartisan vote in the U.S. Senate that passed the Respect for Marriage Act even as we pointed out that the compromise necessary for its passage clearly betrays the true source of the animus against LGBTQ Americans. The only organized opposition to LGBTQ rights, we have repeatedly emphasized, springs from religion. 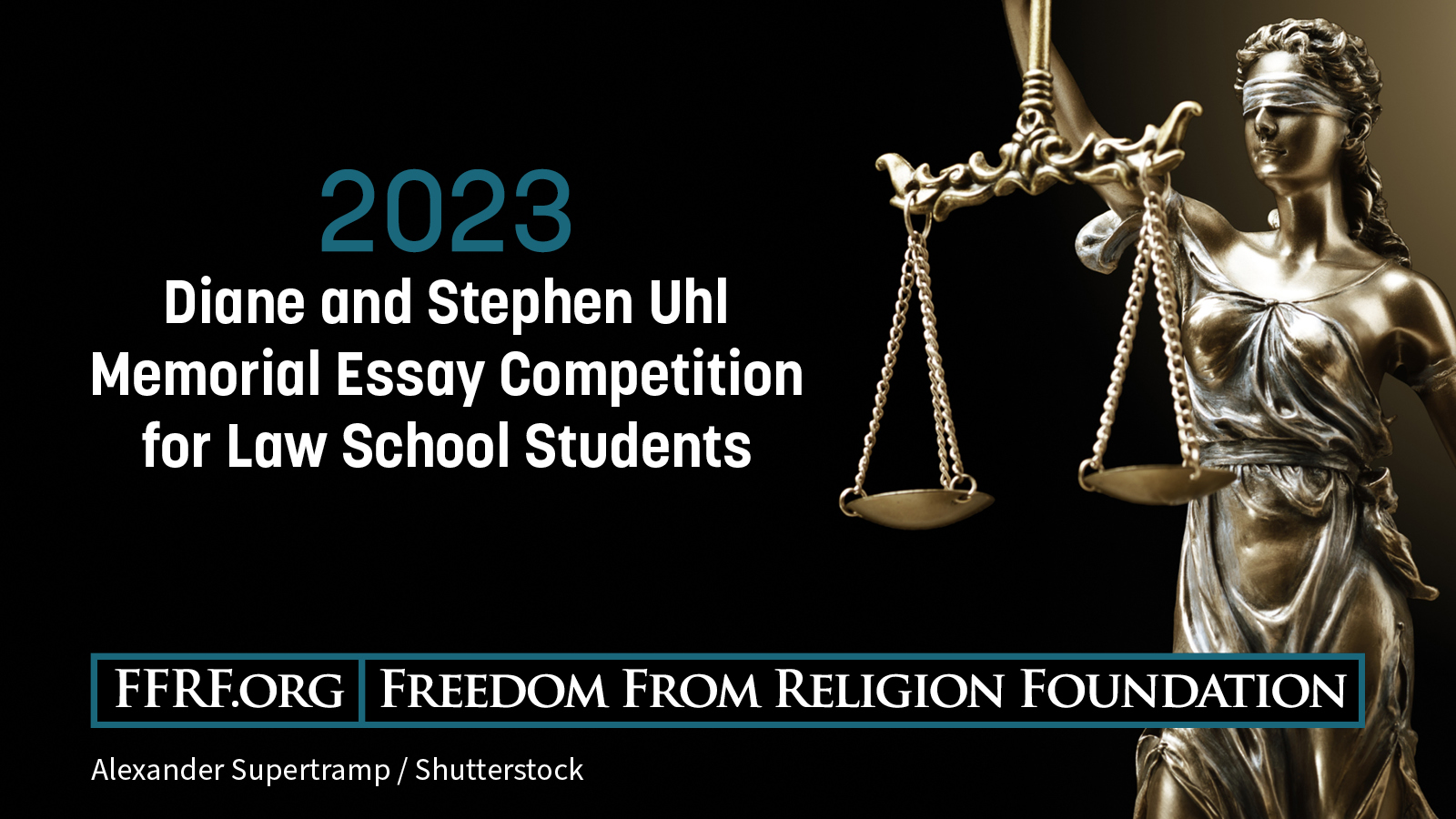 We excitedly announced our 2023 Diane and Stephen Uhl Memorial Essay Competition for Law School Students, with a top prize of $4,000! The contest is open to all ongoing law school students attending a North American law school. Essays must be no longer than 1,500 words (not including footnotes). Deadline for entry is March 15, 2023. Please help spread the word! 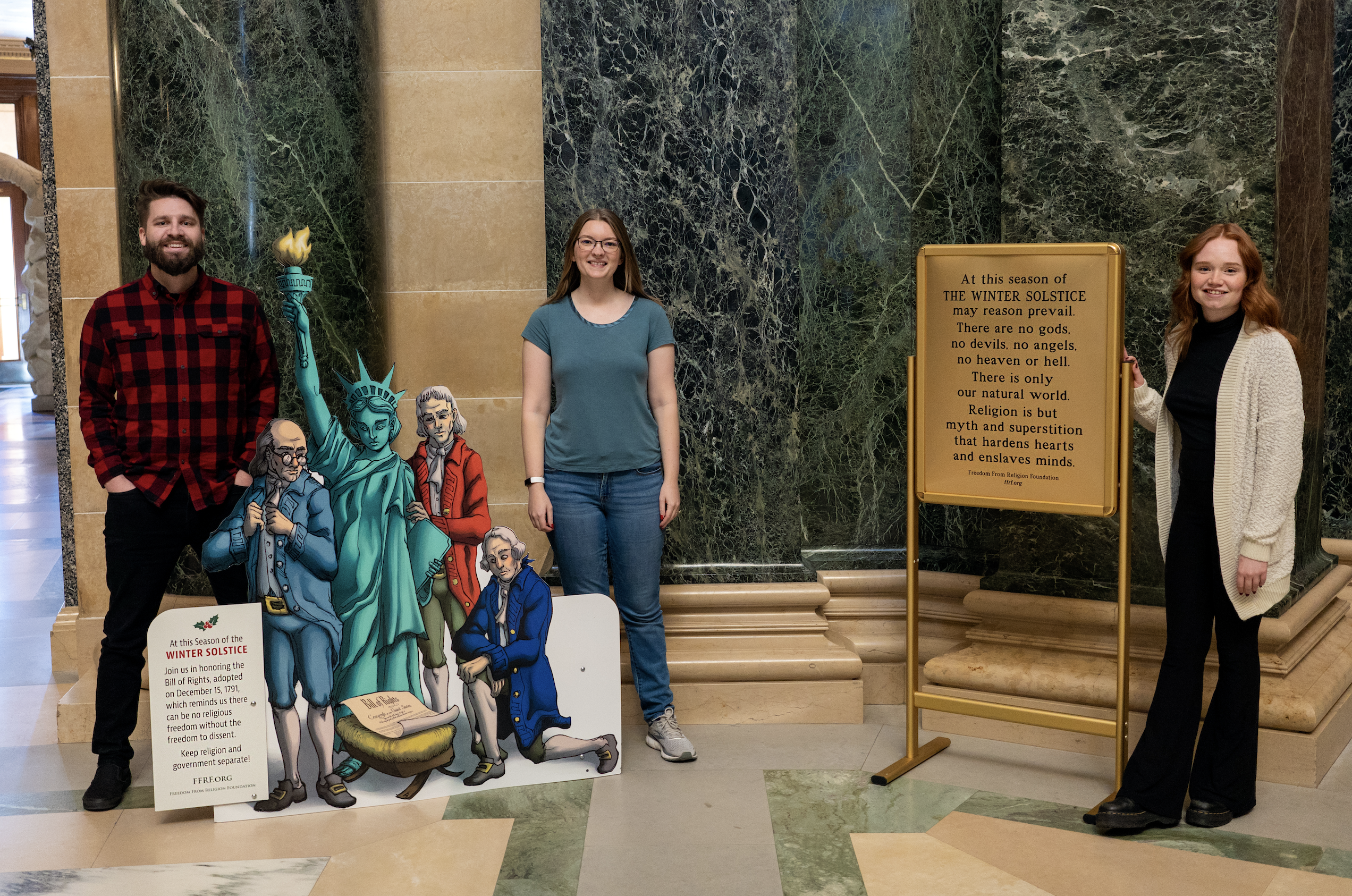 Our secular Winter Solstice holiday display is back in our state legislative building for a 26th time to counter various religious displays and activities there. The Winter Solstice, the shortest, darkest day of the year, has been celebrated for millennia in the Northern Hemisphere with festivals of light, evergreens, gift exchanges and seasonal gatherings.

Andrew Seidel warns on our TV show about the Supreme Court 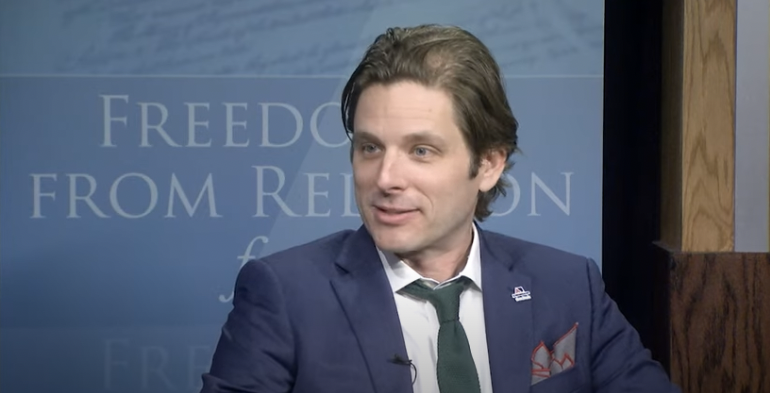 We had a host of rich media offerings, too. Our Sunday TV show guest, Andrew Seidel (formerly with us and now with Americans United), is a leading constitutional expert with a new book warning about the current Supreme Court’s pro-religion bent. “The Supreme Court really is destroying the First Amendment,” he says on the show. You can already watch the interview on our YouTube channel. Or find out where you can catch it on Sunday.

Suing a Catholic entity for denial of health care
On our Facebook Live “Ask an Atheist” feature, we spoke with Evan Minton, who was denied critical health care from California’s largest hospital provider, Dignity Health (a Catholic entity), because he is a transgender man. He is suing Dignity Health, and the Supreme Court decided last year to allow Minton’s suit to proceed.

Shaping the national legislative agenda
We obviously follow the national legislative agenda closely, and much more ably so in recent years under the guidance of our Director of Governmental Affairs Mark Dann. On our Freethought Radio show, Mark recounted our many successes fighting Christian nationalism in the past Congress and the challenges that await us in the upcoming one. We also gave thanks to Dr. Anthony Fauci, a humanist who is retiring this December.

The dangers of overpopulation 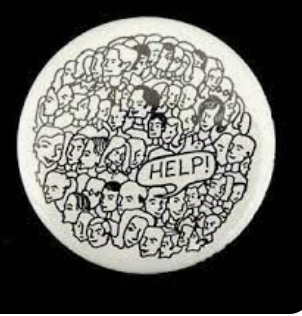 We had a delectable array of differently themed blogs, too. Annie Laurie wrote a piece (“You’re one in 8 billion — and why that’s no compliment”) warning about the dangers of overpopulation. “If we’re truly ‘1 in 8 billion,’ we ought to be doing a better job of slowing our population growth for the sake of our planet and future generations,” she concluded. 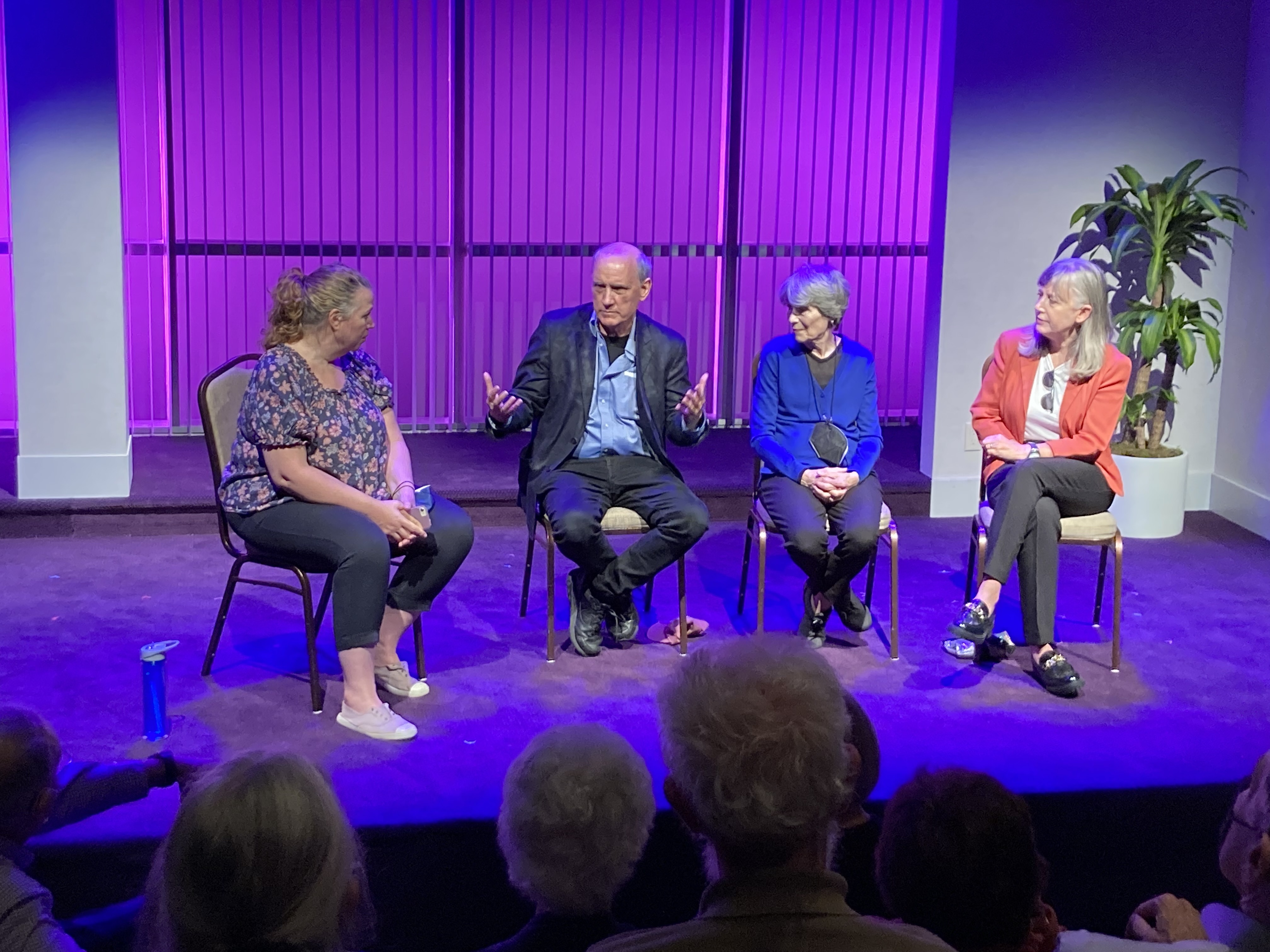 Dan penned a delightful column about (almost)  appearing on Broadway. He was part of an after-play talkback on the off-Broadway stage of “The Unbelieving,” which is about clergy who no longer believe. Dan was invited since he is a former preacher involved in the lives of some of the characters in the play. Read on to find out more. 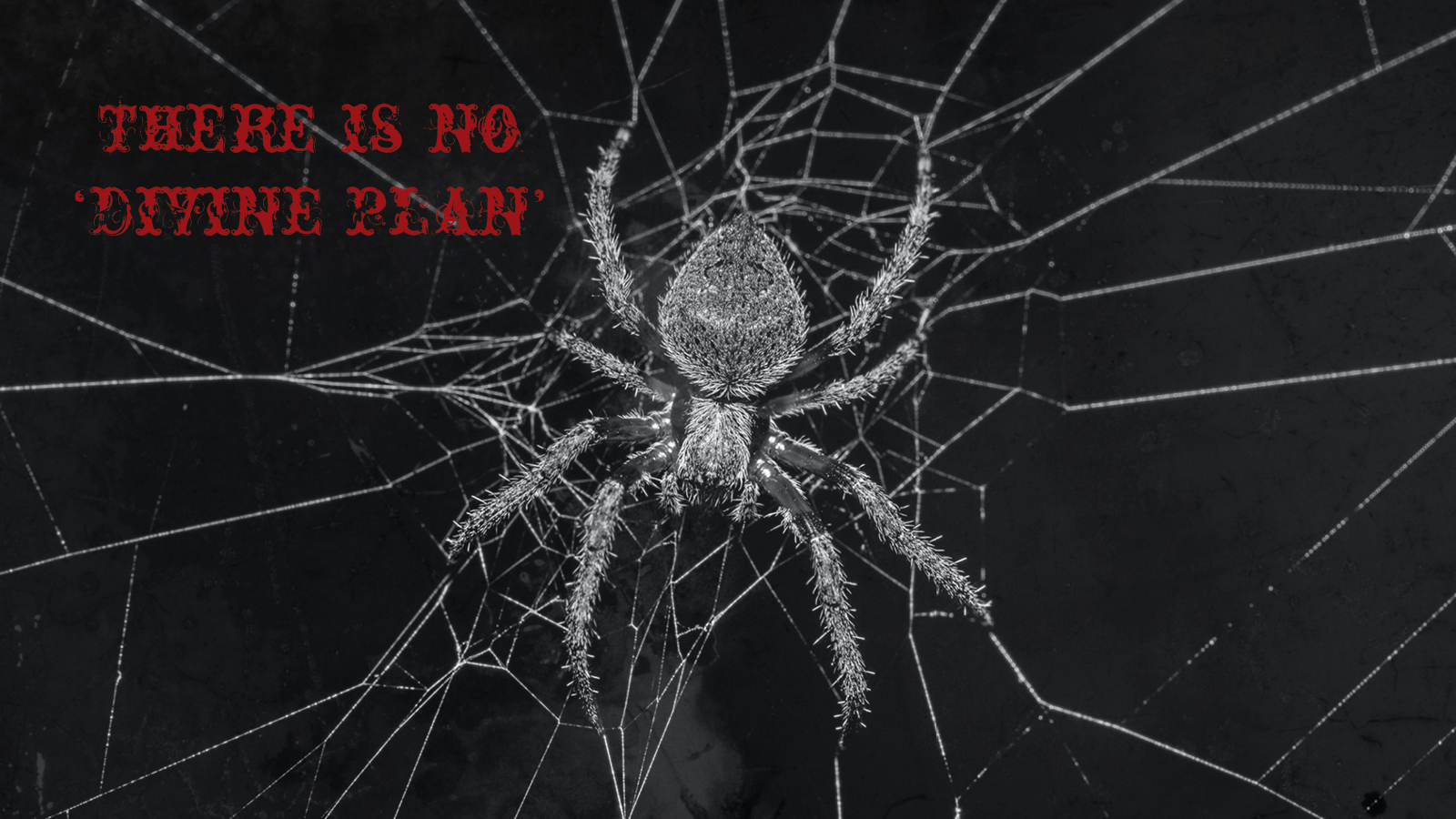 Veteran freethinker and writer Jim Haught skewered in his usual delightful way the notion of a “divine plan” of creation. “There is no divine plan — and no divine creator,” he concluded.

We all know this — and that’s why with your help we are always busy at work to make sure divine notions don’t enter the public sphere.

AMITABH PAL is the Communications Director of FFRF. Prior to joining in February 2016, he was the Managing Editor of The Progressive magazine for more than a decade. He was also the editor of the Progressive Media Project, an affiliate of The Progressive that sends out op-eds through the Tribune Wire Service to hundreds of newspapers in the United States and other countries. Pal has appeared on C-SPAN and BBC and television and radio stations all over the United States and abroad. His articles have been published in school and college textbooks in the United States and Australia. Pal teaches a course at Edgewood College in Madison, Wisconsin. He has a Master's in Journalism from the University of North Carolina and a Master's in Political Science from North Carolina State University.
All Articles by this author
PrevPreviousMy ‘unbelieving’ Broadway gig
NextThoughts on mortality: You gotta walk that lonesome valleyNext