We are thankful to you 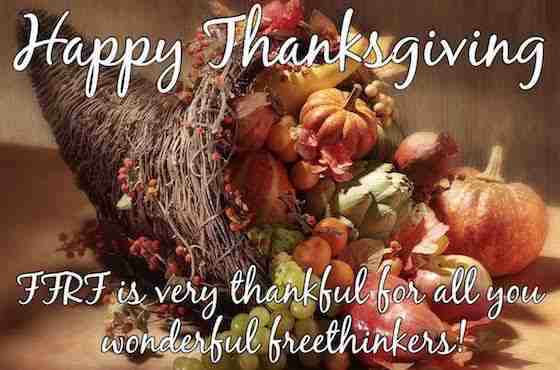 First, a heads up that next Tuesday is #GivingTuesday — a day designated to give online to nonprofits. Bill Gates has pledged to match the first $2 million given to nonprofits on Tuesday, Nov. 28, via Facebook. (Facebook is waiving its usual 5 percent service fees for processing donations this day.) So, look for an early-bird appeal Tuesday.

We are thankful to you

We are thankful this week for everything we’re able to do because of you.

We can help people 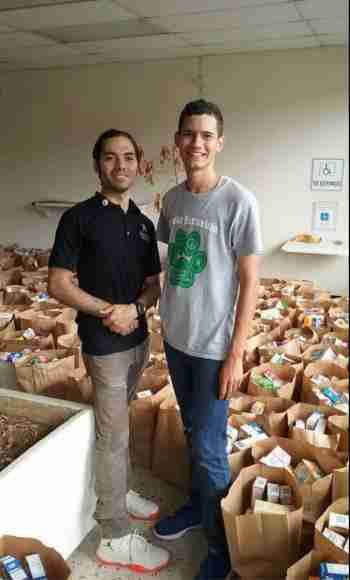 We’re thankful that we can help people in dire circumstances. We sent money through our charity organization, Nonbelief Relief, to Ateistas de Puerto Rico for relief efforts in the aftermath of Hurricane Maria. Recently, we got this wonderful picture and message from Ricardo Santiago of the group.

“I was told FFRF was a contributing organization for Ateístas de Puerto Rico,” Ricardo writes. “Thanks to your Foundation among others, we were able to distribute food and water to an area in the countryside of Puerto Rico in much need of help after the hurricane. Thank you.”

We can take on bible museum

We thank you, our members and supporters, for enabling us to take on that mega-boondoggle: the newly opened Museum of the Bible.

“We atheists have no problem with people reading the bible and learning all there is to know about it,” FFRF Director of Strategic Response Andrew Seidel writes in an incisive blog. “After all, the road to atheism is littered with bibles that have been read cover to cover. We just want the truth of ‘the Good Book’ to be presented unvarnished.”

FFRF was not invited to the museum’s grand opening, but with your support we hope to visit soon to provide you the inside skinny, most likely giving the museum the same treatment we meted out to Ken Ham’s ark park.

We can stop constitutional violations

We say thanks that due to your backing, we were able to stop a blatantly religious Thanksgiving program at an Arkansas elementary school.

“We will be more diligent in the future in an attempt to uphold the letter of the law in regards to separation of church and state,” the school district superintendent replied to us.

Also thanks to you, we made sure that middle school kids in Oklahoma were not forced to listen to Christian music by their teachers.

“During the middle school October staff meeting, the staff was trained on school policy concerning sectarian or religious doctrine in the curriculum or activities of the school,” the superintendent responded to our missive. “School employees will not utilize religious music in classrooms unless such use serves a pedagogical purpose related to a lesson plan in band or choir.”

We’re grateful for our radio show…

Among the things we’ve regularly done over the years, thanks to you, is our weekly radio/podcast show, reaching innumerable listeners. Comedian Leighann Lord recorded just for FFRF a hilarious list of “Six Things to Argue About at Thanksgiving Other than Politics” for this week’s show. After that, we talked with Eva Quinones of the Secular Humanists of Puerto Rico about the group’s relief efforts in that territory. 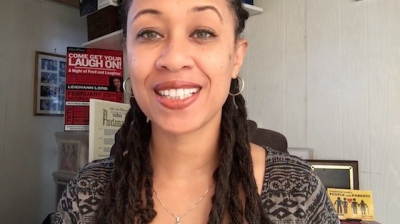 And a new venture we’ve been able to add thanks to your generosity is our “Ask an Atheist” Facebook Live feature. This week, we largely focused on Thanksgiving (no surprise), but FFRF Co-President Dan Barker also talked about his recent trip to Central America, and we played a video of Leighann Lord’s delightful “Six Things …”

We fight the bad guys

Thanks to your assistance, we fight the bad guys through the media.  We’ve been getting the word out about a particularly horrible judicial nominee of President Trump. The venerable online publication Slate quoted us on the guy.

“In September, President Donald Trump nominated Jeff Mateer to the U.S. District Court for the Eastern District of Texas with the strong backing of Sen. Ted Cruz,” Slate reports. “The possible use of state resources to help Mateer’s former client infuriated progressives. The Freedom From Religion Foundation has argued that Mateer ‘used that state office to promote the [First Liberty] Institute’s agenda.’”

We intervene to ensure state/church separation

And thanks to your support, we intervene when there’s a First Amendment violation at a public school.

When an Appleton, Wis., school board member preached from the lectern during a high school graduation, we asked that this stop. And when an ostentatiously devout Indiana high school football coach prayed with his players before a game, we insisted that the school district put an end to it.

And last but not the least, thanks to you, we often mobilize for our cause the most important component of our organization: you, our member. That’s why when the city of Hartford, Conn., was considering a law this week to put a check on spurious “crisis pregnancy centers,” we turned to those of you in the area to voice your support for the measure, and we encourage you to support similar initiatives in your area.

See how much we are able to do even in a truncated week, thanks to you and your patronage. A happy secular Thanksgiving weekend to all of you from all of us here at the Freedom From Religion Foundation—with our sincere gratitude!