From a lawsuit and climate change to sports and social media 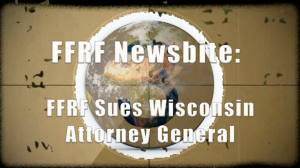 It seems like we did it all this week.

The Freedom From Religion Foundation weighed in on everything from climate change and birth control to sports and social media. But, most importantly, we sued our home state’s Department of Justice for having an unconstitutional chaplaincy.

“The Madison-based Freedom From Religion Foundation filed a lawsuit Tuesday challenging the establishment last month of the state Department of Justice’s Chaplaincy Program, arguing that it is an unconstitutional violation of the separation between church and state and that it excludes atheists and nonbelievers from participating,” our hometown paper reported.

Watch FFRF Co-President Dan Barker pithily explain the case and its significance in our “Newsbite” segment.

It always feels good to take on theocratic guys in our backyard.

We stopped a ministry from brainwashing school kids
We also achieved a victory over an insidious ministry that targets public schools. After we sent a letter out early this week to several Colorado school districts that are attending an upcoming event in which the Todd Becker Foundation is proselytizing, the Cheyenne County School District announced it would no longer participate. We commended the school system and urged others to follow its lead.

Religion drives opposition to climate change
There is no bigger threat facing our planet than climate change, and much of the opposition in this country to the fact that it’s real comes from religion, FFRF Director of Strategic Response Andrew Seidel demonstrates in his latest blog.

“By ignoring our role in climate change we are not just ignoring reality, we are kneeling before and bowing our heads to the same willful ignorance that has driven religion from one generation to the next,” he writes. “And I, for one, refuse to bend my knee to any ignorance — be it rooted in religion or elsewhere.”

And dogma is behind birth control opposition

We also tackled another issue area where most of the opposition comes from religion: contraception and birth control. The Trump administration announced two new rules the day after the midterm elections to make it easier for employers to deny women contraceptive coverage — and we denounced the move.

“This attempt to push through legally defective rules shows how committed this administration is to denying women’s health coverage in the name of religion,” noted FFRF Co-President Annie Laurie Gaylor. “This is far from the first religiously motivated assault on women’s health care, and it will not be the last.”

Our Editorial Assistant Bailey Nachreiner-Mackesey crafted a national action alert to urge you all to contact your lawmakers about the Trump administration’s outrageous move. On our radio show this week, she sheds some light on the subject. After focusing on the dangerous Christian nationalism of Trump’s just-appointed Acting Attorney General Matthew Whitaker, Annie Laurie and Dan interview former Pentecostal Jessica Wilbanks about her touching new memoir, When I Spoke in Tongues: A Story of Faith and Its Loss.

So much more
When a Tennessee middle school disrespected a whole lot of veterans by having a very Christian Veterans Day ceremony, we chastised school officials. We admonished a Florida city manager for a Florida city manager over his unconstitutional social media postings. And we called on an Oklahoma baseball coach/superintendent (yes, it’s the same person occupying both positions!) to cease leading school prayers. 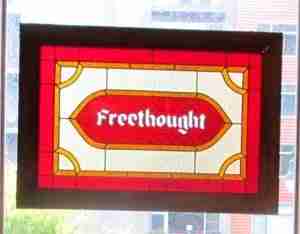 On a more positive note, we were appreciative of the fact that an upcoming “faith/diversity” art exhibition in Milwaukee next door is being truly diverse in including a Freethought banner among its exhibits. In fact, the banner image was submitted by FFRF part-time Administrative Assistant Katrina Treu, who also attends the Milwaukee Institute of Art and Design. Way to go, Kati!

A free-for-all!
In keeping with the week, we thought it best to completely open up our Facebook Live “Ask An Atheist” discussion to questions. Viewers asked about a range of subjects — from polling place violations to religious incursions into public schools — and Dan , Andrew and I bravely attempted to answer them.

Watch our interviews with award-winning composer…
On the national edition of our TV show “Freethought Matters” the Sunday before Thanksgiving, Dan and Annie Laurie interview multi-award-winning Native American composer and atheist Brent Michael Davids. See if the show, which plays in eight major markets (such as Chicago, LA, New York and DC), is broadcast in your area. And don’t worry if it isn’t, since you can catch it on our YouTube channel.

…And with a ‘very funny lady’
For the version of the show broadcast in the Madison. Wis., area, on Sunday at 11 p.m. on Channel 3 we talk with “very funny lady” Leighann Lord (who had our San Francisco audience in splits). For those of you outside our home base, you may have to wait a bit but you’ll be able to either watch the show on YouTube down the road or catch it when it plays in other cities.

It’s hard to imagine we got so much done this week. But we did — and all because of your warmth and generosity.

All Articles by this author
PrevPreviousThe midterms, our annual convention, the acting AG — and more besides
NextTo avoid another Jonestown, reform IRS church reporting policyNext