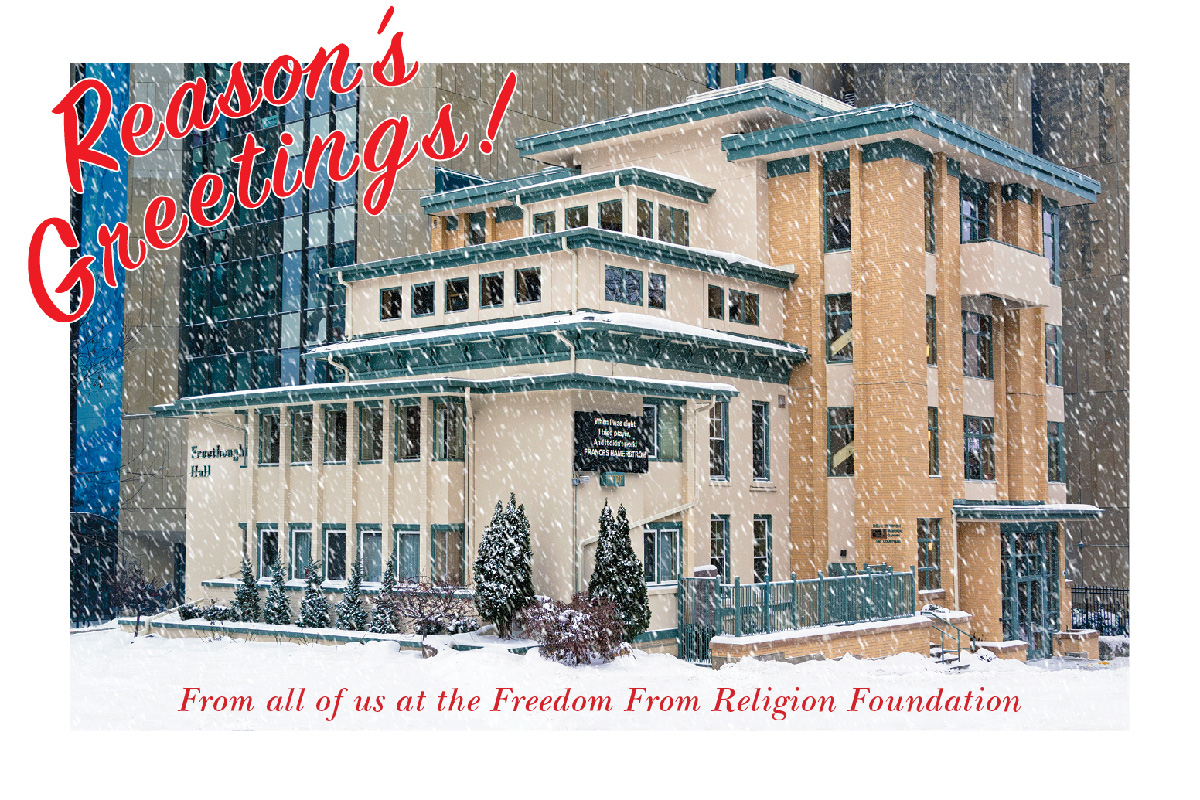 The year may be drawing to a close, but we here at the Freedom From Religion Foundation are still going at it.

The piety that is de rigueur this season for many people — politicians and pundits alike — is among the things keeping our hands full.

A preachy governor …
“The Wisconsin-based Freedom From Religion Foundation is demanding Alabama Gov. Kay Ivey remove the religious Christmas greeting posted to her office’s official Facebook and YouTube page, saying her ‘preaching’ violates the Establishment Clause of the Constitution,” reports an Alabama TV station. It’s not us “saying” it, dudes. A simple glance at Ivey’s message or video makes her preachiness very obvious.

… and an insufferable columnist
Possibly my least favorite columnist of all time, Cal Thomas, sermonized during Christmas that the only way to find true peace is through the “Prince of Peace,” contradicting himself in all sorts of ways. But, as I wrote, Cal (who I’ve had the (dis)pleasure of meeting) is in the final analysis perhaps more on point than even he realizes.

The Washington Post is taking note of us …
We had reason to be pleased with another columnist. Washington Post journalist Elizabeth Bruenig took note of our recent New York Times ad castigating President Trump’s policies (including his made-up “War on Christmas”). Always feels great to get noticed.

… quite intently
The Post actually seems to paying special attention to us. A long recent feature in the paper focused on a small-town Alabama mayor who’s so miffed at us compelling him two years ago to take down an official Christian flag that he’s now plotting to circumvent the Constitution. Not so fast, we’re warning him.

So is the Huffington Post
We also got written about on that mega-website Huffington Post. A piece on young African-American freethinkers by activist Sikivu Hutchinson mentioned the minority scholarships we provide in conjunction with that wonderful group she founded, Black Skeptics Los Angeles.

H&R Block now teaches about us
With all the uncertainty and negativity about the new tax laws, it was cheering for us to get a nice end-of-the-year present from that most well-known of tax preparation services, H&R Block. Its tutorials for tax professionals the coming year bring up our recent legal victory regarding the clergy housing allowance. We’re delighted to be of educational value.

Look at our 2017 accomplishments!
There’s so much we got accomplished in 2017 that it’s impossible to summarize it in an end-of-the-year dispatch. That’s why we talk about this in our year’s final “Ask an Atheist” Facebook Live feature. Watch it and feel surprised at all the battles we strenuously fought (many successfully) to keep the wall of separation intact over the past year.

A perfect song
We have the perfect song for this week. FFRF Co-President Dan Barker and singer Susan Hofer performed freethinker Frank Loesser’s song “What Are You Doing New Year’s?” recently at the Winter Solstice party here at the Freethought Hall headquarters of FFRF in Madison, Wis. We play it on our current radio show (after running an excerpt from Iranian-born activist Maryam Namazie’s speech at our convention).

Something to look forward to
And here’s something to look forward to in the coming year. FFRF’s “A” flag will be unfurled in a New Hampshire town to honor freethought and to protest the town’s Ten Commandments monument. The story was covered this week in an NPR piece, which featured our activist local member Richard Gagnon. The emblem will go up on Tuesday, Jan. 2, on a city flagpole and remain there till the end of the month, making our presence felt in small-town New England.

Happy New Year everybody! Let’s keep the banner of freethought flying high in 2018!