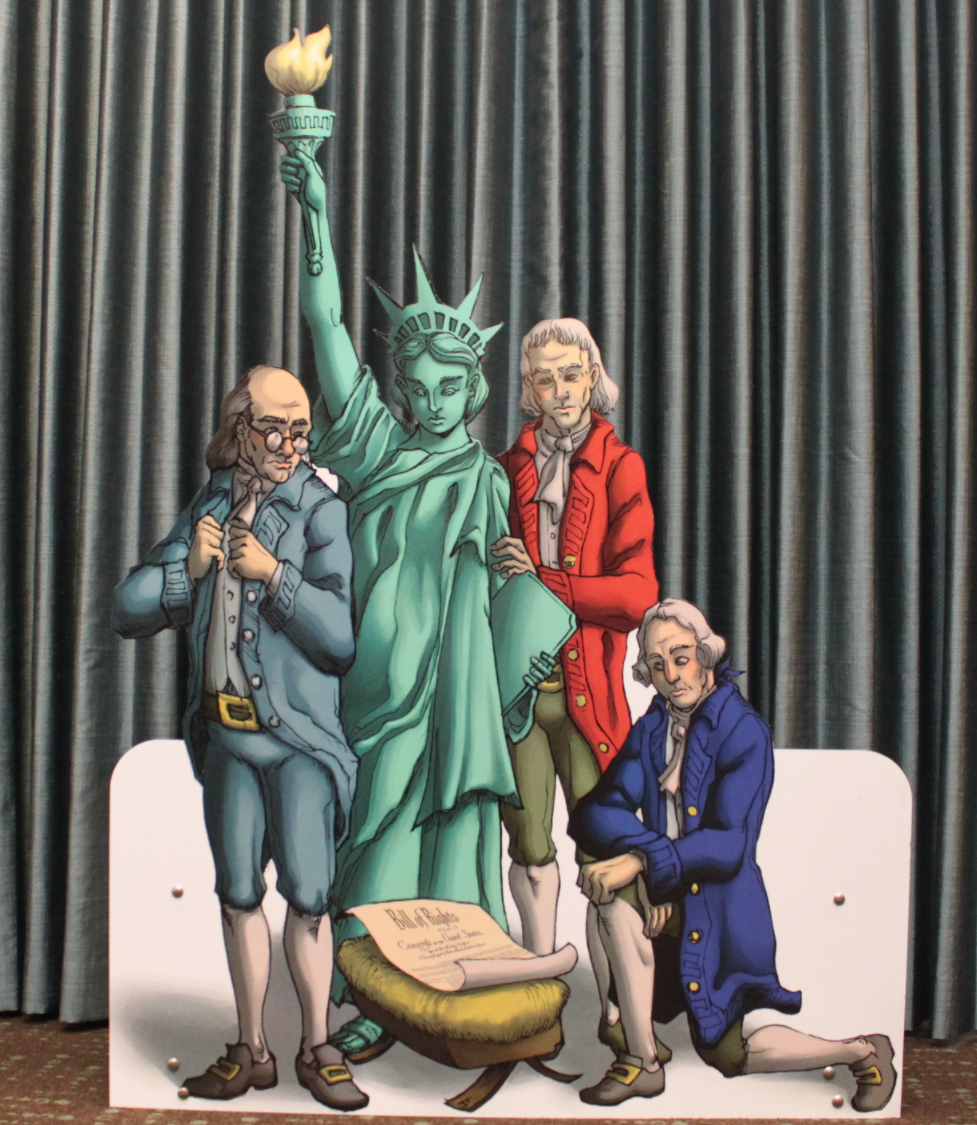 We’ve legally vanquished Greg Abbott, who yanked our display from the Texas Statehouse just because it violated his notion of good taste.

“A federal judge ruled against Texas Gov. Greg Abbott’s decision two years ago to remove a mock Nativity display from the Texas Capitol that advocated for separation of church and state,” the Fort Worth Star-Telegram reports. “U.S. District Judge Sam Sparks ruled late Friday that Abbott ‘violated [the Freedom From Religion Foundation’s] clearly established First Amendment right to be free from viewpoint discrimination in a limited public forum.’”

It was our fourth court victory in recent days, but this one felt extra-special because we got to rub it in the face of Abbott, a theocrat from hell who has gone after us viciously.

“Be assured, this will be appealed,” Abbott tweeted after our win.

Bring it on, governor. We’ll trounce you again.

The courts handed down yet another recent victory for secularists. A massive cross that stood at a Maryland public byway was declared illegitimate.

“The 4th U.S. Circuit Court of Appeals ruled Wednesday (Oct. 18) that the so-called Peace Cross violates the Establishment Clause of the Constitution with ‘excessive religious entanglement,’” wrote Kimberly Winston for the Religion News Service. “The suit against the cross was brought by the American Humanist Association and was supported by the Center for Inquiry and the Freedom From Religion Foundation, three national secularist organizations.”

And since we’re on the subject of victories, watch us discuss our recent win in Florida’s Brevard County, over the board’s denial of an atheist invocation, in our Ask an Atheist Facebook Live feature. (We also chat with Freethought Today Editor PJ Slinger about our “Nothing Fails Like Prayer” contest.)

Enthused by our recent triumphs, we’re thinking big — and getting media coverage.“The Freedom From Religion Foundation sent letters to two dozen Oklahoma judges this week warning of what it called ‘religious coercion’ at a controversial Christian work camp program in Jay,” reports a major Oklahoma news site. “Participants in the Christian Alcoholics & Addicts in Recovery program, called CAAIR, are placed there as an alternative to prison and are required to attend church for at least part of their stay. The Freedom From Religion Foundation says this and other overtly Christian aspects of the program are a violation of clients’ constitutional rights.”

FFRF in the spotlight

FFRF folks are also getting attention in different arenas.A new documentary about various religious personalities who have found their way to freethought features FFRF Co-President Dan Barker’s life story, among others. “Losing our Religion” was screened  the past weekend in Toronto. Watch the trailer here.

Dan has been in the news due to a rare recent FFRF legal loss, too, over the U.S. Congress’ denial of an atheist invocation. See him talk about it in our bite-sized Newsbite feature.

And FFRF Staff Attorney Sam Grover will be out and about early next week educating the public on the Constitution. If you’re in the Midwest, try to make it for his talk on church-state separation Monday evening 6:30 p.m. at the Waupaca Area Public Library. It’ll be simultaneously educational and enjoyable.

“Grover is an attorney with the Freedom From Religion Foundation,” reports the Waupaca County News. “He will focus on examples of religious promotion by the government that will underscore why the ideological battle over church-state separation should be of concern to everyone, regardless of their personal beliefs.”

Since we’ve recently been on a roll, we’re attempting to thwart the federal judgeship of a nominee who can truly be considered despicable. Jeffrey C. Mateer, nominated for U.S. district judge for the Eastern District of Texas, has a long history of attempting to establish a theocracy. Mateer, who spent six years at an extremist Christian law firm, First Liberty Institute, has also called LGBTQ citizens “disgusting,” “sinful” and prone to “debauchery” intending to bring about “the complete destruction of marriage” and has deemed the notion of transgenderism to be “part of Satan’s plan.”

Mateer needs to be stopped, and we’re trying to ensure that.

Testifying at the Statehouse

We’re also intervening at the state level. Sam testified at the Wisconsin Statehouse against an egregious bill that aims to prohibit UW medical school faculty and students from performing abortions or working at Planned Parenthood.

“This bill is religion at its worst,” said Sam in his testimony before the Wisconsin Senate Committee on Health and Human Services. “It advances the Church’s agenda, with no perceivable public benefit, through a two-pronged assault on science education and women.”

Watch his testimony here. (He begins speaking at 154 minutes.)

We sent out an alert to our Wisconsin members urging them to stymie the bill.

We’ve gotten involved at the local level, too. When an Indiana middle school took the unconscionable step of allowing recruiters from a local religious group to come on in, we strenuously objected. Seeing our recent streak of good luck, the school will be pushing its luck if it doesn’t constitutionally comply.

Our wins and our streaks are all made possible only due to your generosity and support.

P.S. On our radio show this week, we chat with activist Frances Kissling (ex-president of Catholics for Choice) and then talk about our Abbott victory, the Mateer nomination and Trump’s recent painful remarks at the Values Voter Summit.