We thank you for making it all possible

As Thanksgiving approaches, we at the Freedom From Religion Foundation thank you for making possible our work in the defense of the Constitution and freethought.

“The Freedom From Religion Foundation on Wednesday dropped a lawsuit it filed a year ago against the state Department of Justice over its Chaplaincy Program after changes were made that encompass a wider range of support volunteers,” our hometown paper reported. 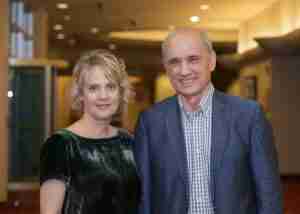 Score one for secularism in the Badger State! This is FFRF’s second court victory in two weeks — something else to be thankful for.

And that’s not all we accomplished on our home turf.

“The city of Fitchburg, Wis., will no longer be giving a $10,000 grant to a local church after the Freedom From Religion Foundation raised questions about the constitutionality of that move,” notes Hemant Mehta on his Friendly Atheist blog.

The reason we “raised questions about the constitutionality” of the grant was that our sleuthing uncovered the real motive of the church project: proselytizing. On our “Newsbite” segment, FFRF Attorney Ryan Jayne provides the details and informs us about another religious grant that FFRF recently got halted in Wisconsin, this one to the tune of $50,000. 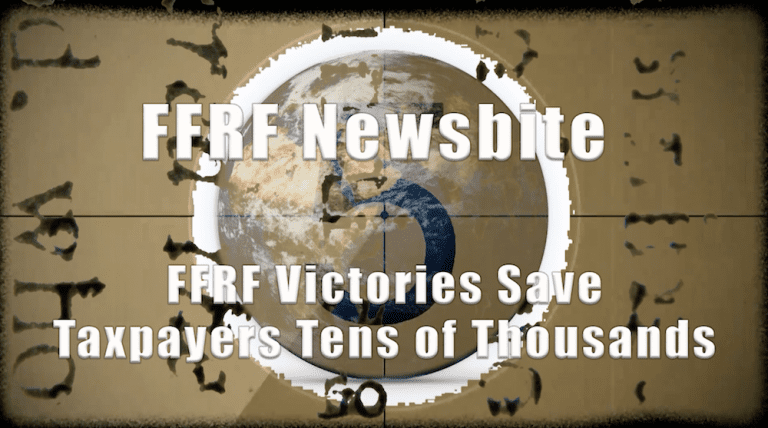 We’re also thankful that we got a bizarre school policy revoked: An Arkansas school district promised us that it would no longer have a written policy threatening players with discipline if they didn’t prioritize religion. “We will refrain from bringing religion and the threat of discipline and punishment into that learning activity,” the school superintendent wrote back to us. Thanks to us, some common sense was instilled in school officials.

Kanye show was too captivating
Somebody we spent the beginning of the week protesting was, believe it or not, Kanye West. Hemant Mehta explains why in his blog.

“During his visit to Houston this weekend, Kanye West didn’t just visit Pastor Joel Osteen and the thousands of people attending Lakewood Church. He also stopped by the Harris County Sheriff’s Office on Friday for two impromptu concerts for inmates and staffers,” Hemant writes. “If this were just a concert, then the praise West received would be warranted. But it wasn’t. It was a church service disguised as a concert. Now the Freedom From Religion Foundation is demanding an assurance that this sort of worship service promoted by government workers at a government facility won’t happen again.”

Atheists in politics? Quite imaginable
Hemant is a kindred nonspirit who we recently gave an award to at our annual convention. He spoke there about the very timely issue of atheists in politics, and on our Facebook Live “Ask An Atheist” feature this week, FFRF Attorneys Andrew Seidel and Elizabeth Cavell chat with him about this hot topic. 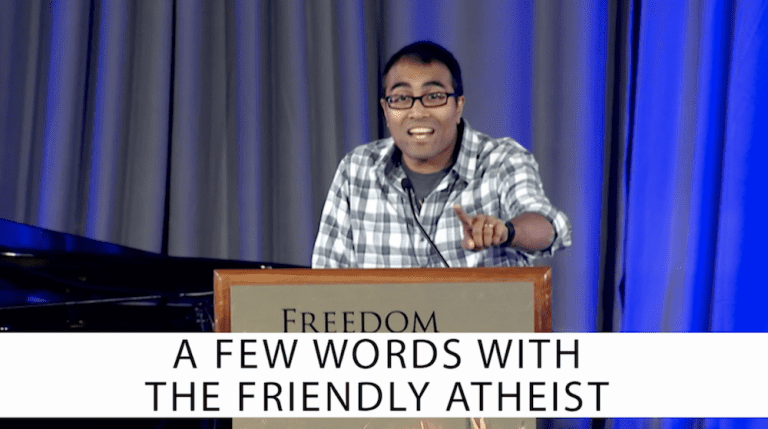 Thanks for alerting us
Thanks to freethinking folks like you in Minnesota, we learned about a school district there inviting a religious group into its classrooms, and we asked school officials to stop doing that. “School administrators are neglecting their duty as public officials when they allow outside adults carte blanche access to recruit their students for a religious purpose,” FFRF Co-President Annie Laurie Gaylor commented.

In the same state, we asked another school district to cancel a religious assembly by another proselytizing group: the infamous Todd Becker Foundation. “These shocking school assemblies are not only problematic from a constitutional perspective, but they are a deeply disturbing and harmful assault on the students’ right of conscience,” Annie Laurie remarked. 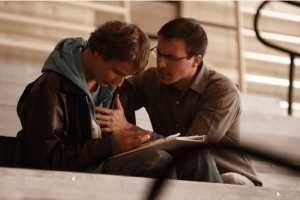 We also objected to a police chaplaincy program in an Ohio town, warning that it is discriminatory and unconstitutional. And we called foul on an annual religion-saturated football event that a Florida high school football team and its support clique participate in. “Organization of and/or participation in a team visit to a church for a religious sermon are clearly prohibited,” FFRF Attorney Chris Line wrote to the Flagler school district. 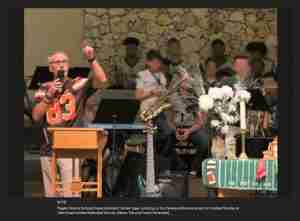 I (don’t) believe in miracles
On our weekly radio show, Annie Laurie and FFRF Co-President Dan Barker chatted about all the recent victories we’ve obtained (thanks to your support) and then interviewed former minister and Christian apologist John Loftus, about his scintillating newest book, The Case Against Miracles. FFRF’s radio show is now on Spotify, so you can also check it out there. 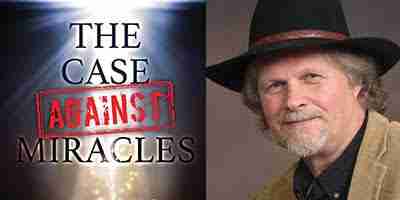 A stellar reproductive rights activist
Our TV show, “Freethought Matters,” this Sunday features an interview with one of the leading reproductive rights activists in the country. Nancy Northup, president of the Center for Reproductive Rights since 2003, talks about, among other things, the upcoming abortion restriction challenge out of Louisiana that her group is litigating, which is being heard by the U.S. Supreme Court this term. Check out the listings for your town. Or you can watch it now on our YouTube channel. 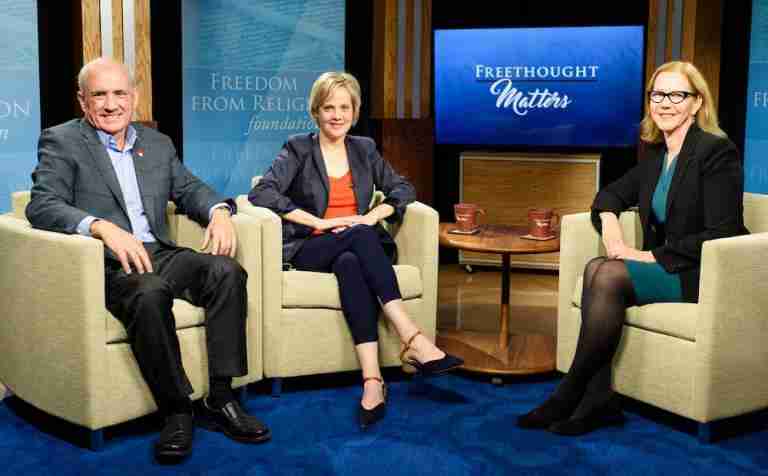 So, we’re thankful to you for enabling us to do all these things to defend the separation of state and church. Without you and your generosity, we couldn’t operate — and for that, we’re truly thankful this Thanksgiving.