We need comprehensive reform to women’s reproductive health care in the United States. The Women’s Health Protection Act is a crucial step in that direction — and that’s why we 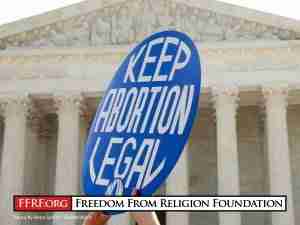 must urge our representatives to pass this vital bill.

It has been three weeks since Texas Senate Bill 8 went into effect. Erroneously called the “Texas Heartbeat Act,” this law outlaws abortions after six weeks of gestation — before most women know that they are pregnant. Additionally, it allows ordinary citizens to sue abortion providers who violate this cruel law. These abortion bounty hunters can earn up to $10,000 if they are successful. Two individuals in Illinois and Arkansas have sued Dr. Alan Braid, a physician in Texas, in an attempt to force a court review of the law. In an opinion piece in the Washington Post, Braid justifies his work: “I fully understood that there could be legal consequences — but I wanted to make sure that Texas didn’t get away with its bid to prevent this blatantly unconstitutional law from being tested.”

The Women’s Health Protection Act, which has been reintroduced by Sens. Richard Blumenthal, D-Conn., and Tammy Baldwin, D-Wis., as well as Reps. Judy Chu, D-Calif., Lois Frankel, D-Fla., Ayanna Pressley, D-Mass., and Veronica Escobar, D-Texas,  protects abortion rights by nullifying such state abortion bans. It would guarantee the right for patients to receive abortion care and for health care professionals to provide abortions. Additionally, it would protect against medically unnecessary restrictions, such as mandatory ultrasounds, waiting periods, admitting privilege requirements and limits on medication abortion. Therefore, the Women’s Health Protection Act is significant because it protects abortion access — even should the Supreme Court’s upcoming decision in a Mississippi case weaken or overturn Roe v. Wade.

It is important here to underscore that abortion restrictions have nothing to do with science and instead have everything to do with religious ideology. For example, Texas Right to Life, an anti-abortion organization that was instrumental in crafting Senate Bill 8, describes itself as a Christian organization aiming to “triumph, advance our Culture of Life, and build the Kingdom of God.” After the abortion ban went into effect, the group developed a website where abortion bounty hunters anonymously report individuals for providing or assisting in an abortion. Thankfully, abortion activists overwhelmed the website with bogus tips, rendering it useless.

Meanwhile, women in Texas are flooding clinics in surrounding states in hopes of obtaining abortion care. A clinic in Albuquerque has said that shortly before the bill went into law, all of their appointment requests were women from Texas. A few days later, all clinics in New Mexico were booked up for weeks. Clinics in Oklahoma have had nearly identical experiences — although their own “heartbeat law” goes into effect on Nov. 1.

For women who don’t have the funds for costly procedures, child care, transportation, lodging — as well as the ability to miss work — the Texas abortion ban effectively renders them without options. Undoubtedly these women, disproportionately women of color, low income and rural, will turn to clandestine procedures that could risk their lives. Indeed, studies have shown that states with more abortion restrictions have higher rates of maternal and infant mortality. Research has also shown that legal abortion is extremely safe, with major complications occurring in less than one-fourth of 1 percent of procedures — lower than for a tonsillectomy. In comparison, the risk of death associated with childbirth is 14 times higher than that of abortion.

Religious extremists claim that abortion bans are meant to “save unborn lives.” However, studies have found that abortion rates are highest where legally restricted. Instead, abortion rates are lowest in countries where abortion is legal and accessible. The World Health Organization estimates that 7 million women are admitted to hospitals every year for procuring an unsafe abortion in countries where it is illegal or inaccessible. Additionally, more than 13 percent of maternal deaths can be attributed to these unsafe abortions. The Texas abortion ban does nothing to advance women’s health care. Instead, it compounds existing inequalities amongst already marginalized women — all in the name of religion.

And this religious attack on women’s health shows no signs of slowing. In fact, 2021 is a record-setting year for abortion restrictions, with more than 80 restrictions enacted in 16 states. This contradicts public opinion since 75 percent of all Americans support abortion rights, including 98.8 percent of secular voters. That’s why it is necessary that we defend science and secular values by passing the Women’s Health Protection Act.

The Freedom From Religion Foundation has submitted written testimony in support of this act. And this Friday, members of Congress will have the opportunity to vote for it. We urge you to demand that your representative votes “yes.” Click here.

Let’s stand up for science and show that abortion restriction have no place in a secular country.

BARBARA ALVAREZ is a contributing writer for the Freedom From Religion Foundation. Previously she had held the role as FFRF's inaugural Anne Nicol Gaylor Reproductive Rights Intern, a program set up to memorialize FFRF’s principal founder, who was an early abortion rights activist and author of the book Abortion is a Blessing. Barbara was a major winner in FFRF’s essay competition for graduate students, writing about the bible’s role in the abortion battle.
All Articles by this author
PrevPreviousAbortion access is not OK in Oklahoma
NextThe Enlightenment gave birth to modern liberalismNext