We ignore pastors’ irresponsible talk at our peril 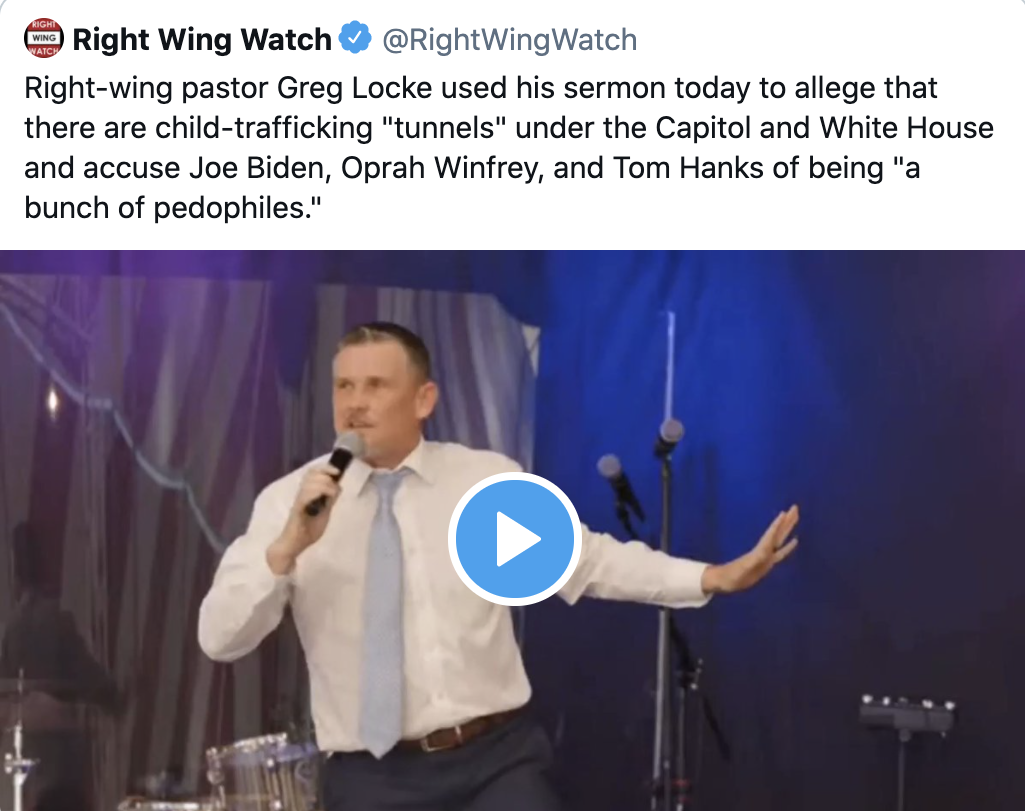 But even a novelist as great as Eliot could surely not have conceived of an evangelist who is as much of a caricature and as irresponsible a “talker” as Pastor Greg Locke of Global Vision Bible Church in Joliet, Tenn.

And, of course, Locke restated the Big Lie that former President Trump is the “legitimate” leader of the United States. A self-proclaimed “prophet,” Locke insisted in his sermon that his prediction about Trump winning the election was a “fact.”

“I don’t care what you think about fraudulent ‘Sleepy Joe,’ he’s a sex trafficking, demon-possessed mongrel, he’s of the left, he ain’t no better than the pope and Oprah Winfrey and Tom Hanks and the rest of that wicked crowd. God is going to bring the whole house down!” he thundered during his sermon.

Chillingly, Locke’s baseless claims of pedophiliac, sex-child trafficking tunnels below the White House were met by his congregation with a standing ovation, according to Newsweek.

Like Trump, Locke fortunately has been banned from social media (and, by the way, threatened to retaliate with violence by saying that the church would respond “with our Second Amendment right” ).

Even merely reporting on this irresponsible talk risks, of course, bringing attention to this bozo, which is what he is after. But, after all, our nation was asleep at the wheel; we weren’t paying enough attention to the QAnon crowd, the Christian nationalist and white supremacist crazies — until they took over the U.S. Capitol on Jan. 6. And lest we not forget, who do you think was in that mob outside the Capitol? Yes, indeed, Greg Locke: “I went up there and prayed with some people and got a bullhorn and preached about Jesus.” He hyped the riot ahead of time, repeating the Big Lie and urging “patriots” to go to D.C.

Locke and the other extremists are still out there, finding other ways to hype their irresponsible and pernicious lies. And they’re still finding an audience that will give them standing ovations.

Such irresponsible talk by pastors and true believers has led to outrageous action. We ignore that at our peril.

Annie Laurie Gaylor is co-president of the Freedom From Religion Foundation. She co-founded FFRF in 1976 as a college student with her mother Anne Nicol Gaylor. She served as the editor of FFRF’s newspaper, Freethought Today, from 1985-2009. She became FFRF co-president with Dan Barker in 2004. Annie Laurie has authored three books for FFRF: Woe to Women: The Bible Tells Me So; Woe to Women: The Bible Tells Me So; and Women Without Superstition: “No Gods – No Masters”, the first anthology of women freethinkers.
All Articles by this author
PrevPreviousDon’t be afraid to say the ‘A word’
NextHandmaid danger conceivably fadingNext