War on Christmas: dispatch from the front lines

I’m a soldier on the front lines of that perpetual seasonal battle: the non-existent “War on Christmas.” Bill O’Reilly has called our organization, the Freedom From Religion Foundation, “the most aggressive” group fighting this war. Thanks for the street cred, Bill.

The modern WoC dates to John Gibson’s 2005 book: The War on Christmas: How the Liberal Plot to Ban the Sacred Christian Holiday Is Worse Than You Thought. 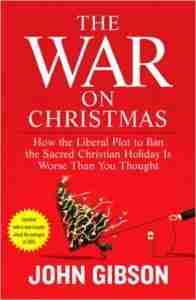 Gibson was a Fox News host and drafted soon-to-be War on Christmas grand poobah and fellow Fox-Newser Bill O’Reilly into the war.

O’Reilly enjoys wielding his influence so he went after businesses for being inclusive, rather than Christian. Gibson didn’t focus on businesses saying “Happy Holidays.” He focused on something that never happens. Ever. Officials banning nonreligious symbols, like Santa. Here’s Gibson’s summary:

You might think that the war on Christmas is being fought on the grounds that overtly religious symbols in public-such as nativity scenes and crosses-violate the separation of church and state that many judges have read into the First Amendment of the U.S. Constitution.

But again, you‘d be underestimating the war on Christmas. It’s worse than you think. Liberals’ attacks now focus on symbols regarded by most Americans-and even by the Supreme Court of the United States (in its Lynch v. Donnelly ruling) to be secular symbols of the federal holiday that is Christmas. Wannabe constitutional lawyers in local government offices all over the country are declaring unconstitutional normal and traditional Christmas representations such as Christmas trees, Santa Claus, treetop scars, wreaths, the singing of and listening co Christmas carols or Christmas instrumental music, attending a performance of Dickens‘s A Christmas Carol the publication of the word “Christmas” itself, and even the colors red and green!

This doesn’t really happen. But that didn’t matter, Gibson and O’Reilly were Fox News acolytes. So they sacrificed facts on the altar of ratings. It’s the Fox News way.

Every year since, O’Reilly has feasted on the mythical war. Some of his most embarrassing moments stem from the fight. Two of O’Reilly’s greatest gaffes, “Tide goes in, tide goes out . . . You can’t explain that” and “Christianity is not a religion, it’s a philosophy” are from War on Christmas segments.

Perhaps fed up with putting his foot in his mouth, last week O’Reilly declared victory in his fabricated war. But he spent the segment praising businesses that recognize only his particular set of myths, and attacking those that do not. How dare businesses seek to be inclusive and welcoming at a time of year when people buy gifts?! What are they trying to do: sell stuff?

Commercialism is Christmas, and, if anything, Christians should be upset that their holiday is being co-opted for such base purposes. But they’re not. Religion needs and craves outside approval for its myths, something beyond an antiquated, self-contradictory book. What does it say about a religion that throws a tantrum simply because all the nation’s attention is not focused on it? The War on Christmas is Christianity flexing its prima donna privilege and getting upset that we’re not paying enough attention to her.

This need for commercial recognition reeks of fragility. It brings to mind Ben Franklin’s words on religion needing secular support: 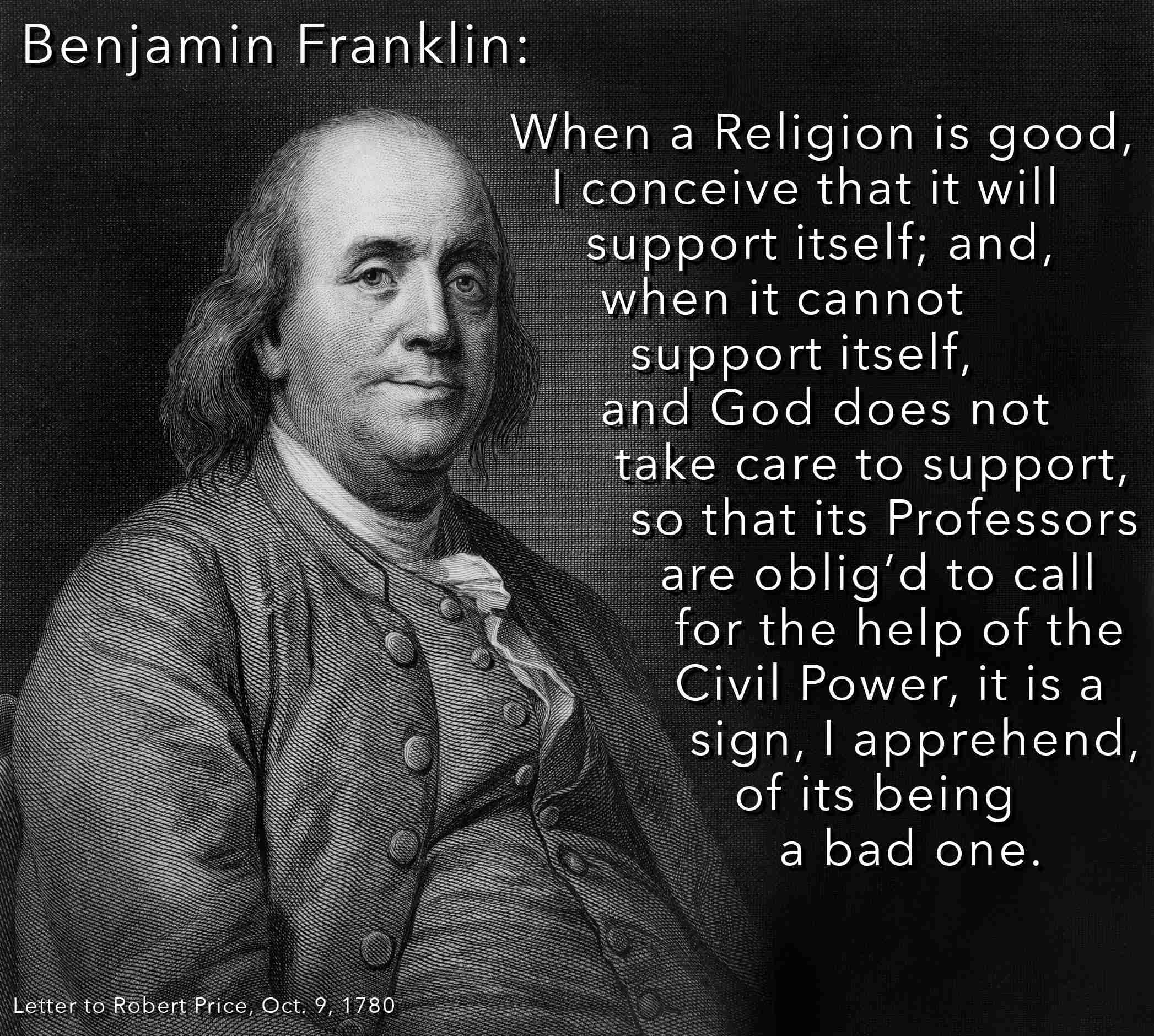 The fragility is understandable. Other than five letters, there is not much Christian about Christmas. Decorating evergreen trees, giving presents, Yule logs, mistletoe, were all stolen from pagan traditions. Hell, even the time of year is not Christian. The bible says Jesus was born when the shepherds were in the fields. Shepherds didn’t sleep in fields with their flocks in December.

So why all the pagan relics in a supposedly Christian holiday? Because early church leaders were trying to assimilate pagans celebrating the Winter Solstice and Saturnalia and other, more fun and less somber holidays. Those pagans were understandably reluctant to give up their winter revels, so the church stole them. The church appropriated the winter festival for the birth of a savior whose birthday was in doubt. Here’s a 90-second explanation of this Christian appropriation from Adam Ruins Everything.

This pagan history is why the only true War on Christmas in America was waged by those most pious forebears: the Puritans and the Pilgrims. Yup, the only people who’ve ever tried to ban Christmas were Christians.

No wonder Christians are touchy about Christmas—it’s not a very Christian holiday. At least, not as Americans practice it. But the way we practice Christmas is better: friends, family, presents, lights, evergreen, music, food, booze. That’s awesome. Lawrence Krauss said much the same.

One of reasons I love celebrating Christmas: the tree, the lights, the presents, its origin is just a pagan festival of nature's solstice.

Nothing about the real celebration is religious. Religion is an afterthought. The celebration thrives on the human, not the divine. As our friends at American Atheists put it, Americans keep the merry and dump the myth. And so we should. If there is any war on Christmas, it is this slow bleed of the sacred into the secular. And it is most welcome.

But that’s not O’Reilly’s concern. He’s busy tilting at tinsel-less windmills. So back to O’Reilly’s War–there is none. There is no war on Christmas. But many Christians are waging a war on the Constitution. They are seeking to use a government belonging to We the People to promote their personal religious beliefs. They are abusing the power of their office because they’ve never been challenged. Because of that weakest of all arguments: “tradition.” So the war is not on Christmas, but on Christian privilege. And despite what O’Reilly has said, Christianity is losing.

Andrew L. Seidel is a constitutional attorney and the Director of Strategic Response at the Freedom From Religion Foundation. His first book The Founding Myth: Why Christian Nationalism Is Un-American was burned by a Tennessee preacher. His second book, American Crusade: How the Supreme Court is Weaponizing Religious Freedom, is due out in 2022. He's won numerous academic awards and holds two law degrees: a J.D. magna cum laude from Tulane University Law School and an L.L.M. from Denver University’s Sturm College of Law. Andrew has a B.S. in neuroscience and environmental studies from Tulane. Before dedicating his life and law degree to keeping state and church separate, Andrew was a Grand Canyon tour guide and an accomplished nature photographer. Andrew has appeared on Fox News to debate Bill O’Reilly, MSNBC, and hundreds of other media outlets speaking on behalf of FFRF.
All Articles by this author
PrevPreviousLiberty Counsel flip-flops, ruining Christmas for millions!
NextLiberty Counsel takes liberties with factsNext