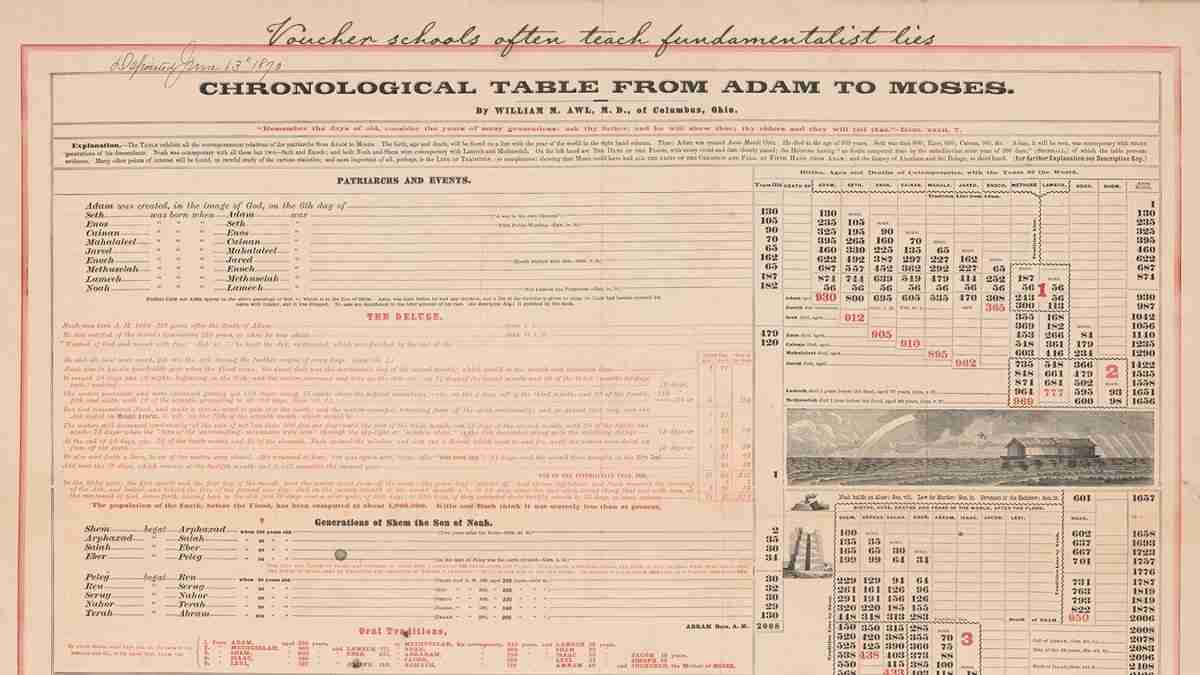 In violation of the separation of church and state, American tax dollars are funneled to fundamentalist private schools teaching crackpot absurdities — such as a claim that Noah probably took two baby dinosaurs onto his ark.

Under the banner of “school choice,” vouchers are a device to pour taxpayer money into religion, despite the First Amendment’s prohibition of it. Pious parents who don’t want their children exposed to public schools can obtain government vouchers to pay for religious schooling — some of it Catholic but more of it evangelical. These born-again schools provide shabby education.

The Orlando Sentinel examined 151 private Florida schools with 140,000 students — most of them funded with tax dollars through a voucher plan passed by state legislators. The Sentinel’s report began: “Some private schools in Florida that rely on public funding teach students that dinosaurs and humans lived together, that God’s intervention prevented Catholics from dominating North America, and that slaves who ‘knew Christ’ were better off than free men who did not.”

The article says some evangelical schools use texts from three fundamentalist publishers — Abeka, Bob Jones University Press and Accelerated Christian Education — adding: “The books denounce evolution as untrue, for example, and one shows a cartoon of men and dinosaurs together, telling students the Biblical Noah likely brought baby dinosaurs onto his ark.”

The books teach Religious Right politics, claiming that the historic civil rights movement occurred because “power-hungry individuals stirred up the people” — and that the Endangered Species Act is part of a “radical social agenda” — and they hint that gays are evil and that European whites are superior.

The Sentinel said some evangelical schools “hire teachers without degrees and with criminal records, and forge fire and health inspection forms, and … hold classes in aging strip malls” where some face eviction for nonpayment of rent.

Intelligent, educated Americans should pity children from born-again families who suffer indoctrination with such right-wing hate and superstition. When these youths enter adult life, they’re ill-equipped for modern scientific society.

This column is adapted from a piece originally published at Daylight Atheism on Jan. 13, 2020, and syndicated by PeaceVoice.

James A. Haught, syndicated by PeaceVoice, was the longtime editor at the Charleston Gazette and has been the editor emeritus since 2015. He has won two dozen national newswriting awards and is author of 12 books and 150 magazine essays. He also is a senior editor of Free Inquiry magazine and was writer-in-residence for the United Coalition of Reason.
All Articles by this author
PrevPreviousChallenging Aaron Rodgers, Rev. Franklin Graham, the Ariz. guv & a Congressman
NextThe prison of beliefNext