For us at the Freedom From Religion Foundation, the past week was global.

The work we do here is primarily centered in the United States, but we can’t ignore events around the world — especially when they exemplify religious fundamentalism that serve as a warning back home.

The Middle East example
Take, for instance, the humanitarian catastrophe in Yemen, which the Saudi Wahhabi Sunni monarchy has created in its sectarian crusade against Shiite Iran. The United States is aiding Saudi Arabia, and we urged Congress to halt the involvement. “The conflict in Yemen will continue to exact its human toll — until the United States and its ally Saudi Arabia can be persuaded to see reason,” we stated.

The Islamic Republic of Iran is itself committing a litany of atrocities — very often against its own citizens. A particularly shocking recent example, that of human rights activist Nasrin Soutoudeh being sentenced to 33 years and 148 lashes, prompted us to flash back and reflect on why we engage in our mission.

“In December 1979, when the Grand Ayatollah Ruhollah Khomeini became ‘supreme leader’ of the newly born Islamic Republic, FFRF released an ironic bumper sticker: ‘Iran: One Nation Under God,’” we reminisced. “The brutal sentence of this champion of human rights in Iran shows exactly why secular government is essential to ensure women’s rights, human rights and freedom of thought. This is why we at FFRF do what we do.” 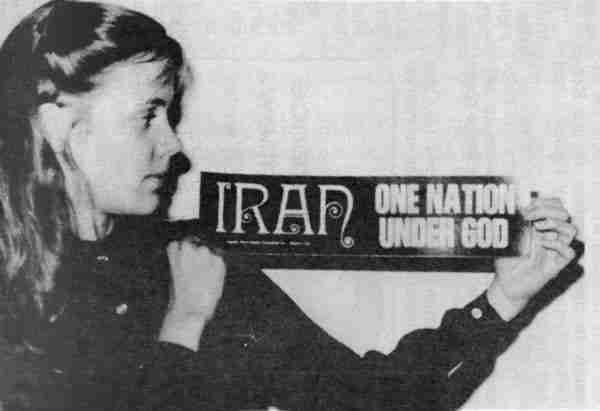 In our “Newsbite” this week, FFRF Co-President Annie Laurie Gaylor ties it all together — and talks about an award she received last year from an organization fighting for the rights of Muslim women globally. 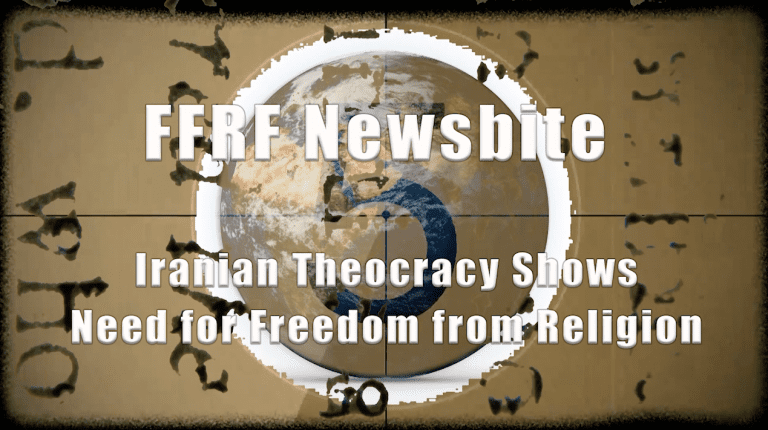 Bad situation in South Asia, too
Annie Laurie also blogged this week about the toll another type of fundamentalism is taking on women. A Nepali Hindu cultural practice of segregating menstruating women has resulted in several recent horrific deaths. “If women had created religions, instead of men, menstruation would be acknowledged with this commandment: ‘Thou shalt honor and pamper the menstruous woman,” she contends.

On our TV show, “Freethought Matters,” we interviewed a person who’s made a number of journeys: from Pakistan to Texas and out of Islam. Sarah Haider later co-founded Ex-Muslims of North America (EXMNA). You can watch her on Sunday morning chat with Dan and Annie Laurie about these passages and her work (check here to see if the show plays in your hometown) or you can catch the interview any time on our YouTube channel.

A fresh breeze out of Africa
Extending our global theme, we interviewed Roslyn Mould, the coordinator of the West African Humanist Network, all the way from Ghana, on our radio show this week, in addition to talking about Trump’s recent bible-signing episode and other domestic matters.

Condemning the New Zealand killings
And, of course, we unequivocally condemned the horrific killings in New Zealand. We also pointed out the futility of invoking prayers and thoughts in response to such a tragedy.

We legally persevere in the service of secularism
There was a lot happening domestically, too. We suffered a setback. In our historic challenge of a housing allowance in the tax code that uniquely privileges clergy, a three-judge panel of the 7th U.S. Circuit Court of Appeals in Chicago ruled against us. “It’s an injustice not just to us, but to taxpayers who have to pay more than their share, because clergy pay less,” Annie Laurie commented.

Oral arguments were also held at the appellate court level in a Florida case that we’re fighting over a Florida county board’s exclusion of freethinking invocations. Don’t worry, folks. As Annie Laurie says, “We have the law and the Constitution on our side.” 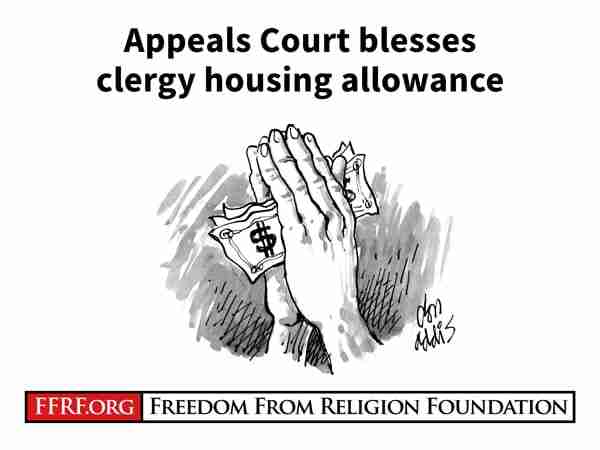 DeVos’ dangerous crusade
The Trump administration continues to cause enormous damage, including to our public education system. Secretary of Education Betsy DeVos unveiled proposals this week that would batter the constitutional separation wall. “DeVos is on a dangerous calling: to subvert public schools and to advance religious education — while she’s in charge of this country’s education system, no less,” we wrote. 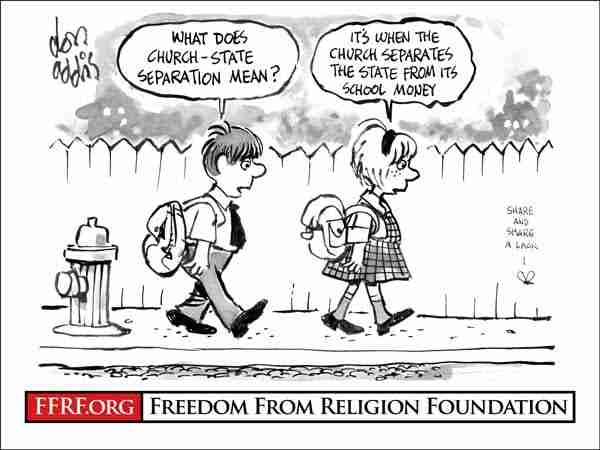 On the first half of our “Ask an Atheist” Facebook Live feature, FFRF Director of Strategic Response Andrew Seidel and I talked about DeVos, her fundamentalist background, and the destruction she’s causing. In the second half, FFRF Co-President Dan Barker skyped in from Arizona (where he was on a book tour) along with cartoonist and FFRF friend Steve Benson.

See Dan Barker in Georgia
Dan has been traveling around a lot recently to spread the freethought gospel and talk about his new book, Mere Morality. He’ll be at the University of North Georgia (Gainesville campus) on Monday, March 18, to debate a Christian apologist. Hope to see you all Peach Staters there!

A lot of chastising (and showing solidarity, too)
Certainly, much of our work is taken up by state and local-level matters, and this week was no different. A school district in Michigan is subjecting its students to so much coercion that we had to write it a long letter taking it to task. (Read the accounts of the students forced to sit through fundamentalist sermons.) And school officials in Texas constitutionally crossed the line when they appeared in an ad for an evangelical group.

Ever so often, an official entity will do the secularly right thing, and then we throw in our lot with them. The city of Boston has been hauled to court for refusing to fly a Christian flag outside City Hall, and we have happily signed on to an amicus brief (along with several other groups) in support.

Equality for all!
We regularly chime in on important national legislation, such as the Equality Act, which will extend civil rights protections to the LGBTQ community. The only organized opposition to the Equality Act is religious in nature, which is why FFRF works so hard to ensure that religious doctrine is not inscribed in U.S. civil laws or social policy. 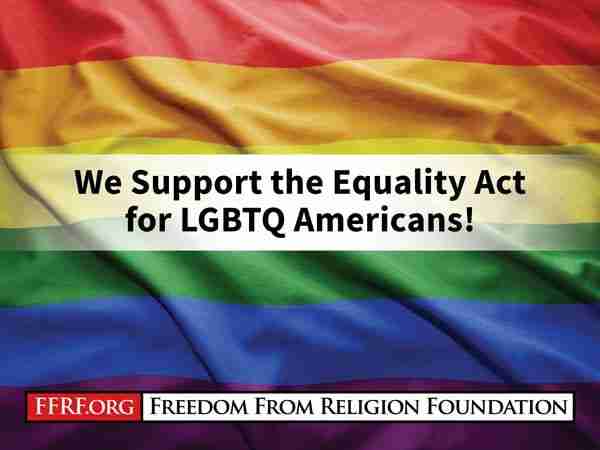 The Middle East, South Asia, Africa and — centrally — the United States: Everything we do to tackle global events is due to your generosity and backing.