Early this morning, Donald Trump was thinking about the bible. Or, to be a bit more precise, he was watching Fox News, as is his wont, when he saw a state representative on Fox & Friends talking about his push for bible classes in North Dakota public schools. Trump took to his favorite platform and tweeted:

That state rep, Aaron McWilliams, addressed criticism of the classes by admitting, “There’s a separation of church and state, but there’s not a separation of books from education.” He then cited (and misnamed) and stumbled in describing a 1963 Supreme Court case that struck down devotional bible reading in the public schools, muddying the waters and making only one thing clear: that he doesn’t really understand the law.

Bible classes in public schools are a terrible idea, one almost universally pushed by Christians. FFRF is tracking bible class bills in Florida, Indiana, Missouri, North Dakota, and Virginia. No doubt after this tweet, we’ll see more. These bills are part of the notorious Christian nationalist legislative push dubbed “Project Blitz.” A model bill for these bible classes appears in the Project Blitz playbook. Project Blitz is also behind the bills requiring the display of “In God We Trust,” including in public schools.

Trump’s relationship with the bible is not complicated: He uses it as a political weapon. There may be a joke somewhere about “two Corinthians” walking into a bar, but the farce is Trump and his followers’ knowledge of that book.

Like most Americans, he touts the book while knowing little about it. Almost half of all Americans think the Golden Rule appears in the Ten Commandments and more than half cannot name the four Gospels.

And before you blame this ignorance on the rise of nonreligious Americans, atheists and agnostics score highest on tests of religious knowledge. This is because the road to atheism is littered with bibles that have been read cover to cover,” as I’ve said. 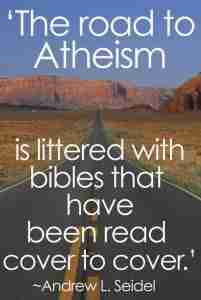 If it were just a question of a critical, unbiased teaching of the bible, more students in our public school would be driven away from religion by these classes.

However, we know from experience that most schools fall far short when they try to teach these classes. In 2007, Texas passed a bible class law and several surveys of Texas bible classes have shown how woefully inaccurate and unconstitutional the classes are, including that they “are blatantly and thoroughly sectarian, presenting religious views as fact and implicitly or explicitly encourage students to adopt those views.”

This is especially true for states that require schools to provide the bible as an elective class. Smaller, rural schools with fewer resources and access to a wider talent pool end up hiring teachers with a religious agenda who promptly violate the right of students. It’s something we at the Freedom From Religion Foundation see all too often.

It is very difficult to teach the bible objectively and critically, as the First Amendment would require. For instance, when the class comes to the four gospels that so few Americans can name, the only objective educated position is that Jesus was not born of a virgin, that this clear myth results from a mistranslation of the Hebrew word almah meaning “young girl,” not virgin. This was mistranslated into Greek as parthenos, “virgin,” even though there is a different Hebrew word for virgin.

Students would have to be taught that Jesus was not quite the Prince of Peace modern Christians claim, but a man who also claimed he came to tear families apart: “Do not suppose that I have come to bring peace to the earth. I did not come to bring peace, but a sword. For I have come to turn ‘a man against his father, a daughter against her mother, a daughter-in-law against her mother-in-law a man’s enemies will be the members of his own household.’”

Students would have to be taught that Lot, the only “righteous” man the biblical god deigned to save from Sodom and Gomorrah also gave his daughters up to be gang raped by a mob and that the bible says the daughters later got their father drunk and has sex with him so that they could have his children.

Students would have to be taught that the Ten Commandments condone slavery. Twice. That they treat women as property. And that they promise to punish innocent children for the crimes of their parents and grandparents.

Students would have to learn that, although the bible says a great deal about sex,  slavery, rape, and genocide, it says nothing condemning abortion. Though it does contain this gem: “Happy is the one who seizes your infants and dashes them against the rocks.”

These two difficulties — preventing teachers from imposing a personal religious agenda, and presenting the class as scholarly — lead to inevitable lawsuits that can be disastrous for public schools. FFRF successfully litigated one such suit in West Virginia over the past two years, which first-graders were being taught that Adam and Eve could have slid down the backs of dinosaurs “like a water slide.” In FFRF’s challenge to religious instruction in Rhea County, Tenn., the court said, “This is not a close case. Since 1948, it has been very clear that the First Amendment does not permit the state to use its public school system to ‘aid any or all religious faiths or sects in the dissemination of their doctrines.’”

Bible classes in the public school —just like every other attempt to inject religion into our government-run institutions — are divisive. What Christian parent would want their child taught by the government the Jesus’ virgin birth is a myth? What non-Christian family would want their child to have to unnecessarily suffer the teasing, bullying and alienation that comes from being tagged as “other” for missing these classes?

If parents want to teach their children about the bible, they should. When the government gets involved and starts dictating religious truth and myth, everyone is going to get upset. The best course is to leave religion to the private sphere, where it belongs. As the Supreme Court wrote in 1992, “The design of the Constitution is that preservation and transmission of religious beliefs and worship is a responsibility and a choice committed to the private sphere, which itself is promised freedom to pursue that mission.”

Oh, and that North Dakota bible bill that Trump liked? It failed. Miserably. Going down after its second reading in a 5-42 vote.

Andrew L. Seidel is a constitutional attorney and the Director of Strategic Response at the Freedom From Religion Foundation. His first book The Founding Myth: Why Christian Nationalism Is Un-American was burned by a Tennessee preacher. His second book, American Crusade: How the Supreme Court is Weaponizing Religious Freedom, is due out in 2022. He's won numerous academic awards and holds two law degrees: a J.D. magna cum laude from Tulane University Law School and an L.L.M. from Denver University’s Sturm College of Law. Andrew has a B.S. in neuroscience and environmental studies from Tulane. Before dedicating his life and law degree to keeping state and church separate, Andrew was a Grand Canyon tour guide and an accomplished nature photographer. Andrew has appeared on Fox News to debate Bill O’Reilly, MSNBC, and hundreds of other media outlets speaking on behalf of FFRF.
All Articles by this author
PrevPreviousTwo governors v. Cecile Richards, Steve Pinker and Ron Reagan
NextSurviving the polar vortex, taking on Trump & petitioning the Supreme CourtNext