President Trump, speaking today before the Conservative Political Action Conference, took the stage to Lee Greenwood’s song, God Bless the USA, and that set the tone for 75 minutes of religious pandering. Let’s dive in: 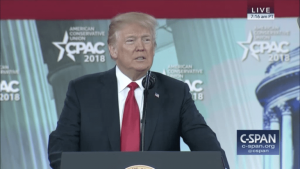 “We’ve confirmed a record, so important, of circuit court judges, and we are going to put in a lot more.” Trump added some laudatory remarks about his Supreme Court appointment, Neil Gorsuch.

His court appointments will be the worst and likely most lasting legacy of the Trump presidency. The lifetime appointees the Senate is allowing Trump to push through are as unqualified as they are right-wing. We were able to stop the nominations of Jeff Mateer and a few others. But packing the courts with the Federalist Society’s handpicked judicial appointments has been a major coup for Trump — although it’s not really his victory.

Senate Majority Leader Mitch McConnell, who blocked President Obama’s nomination of a Supreme Court replacement for Justice Scalia, is entirely responsible for the addition of Gorsuch to the high court. McConnell’s blockade was unprecedented in U.S. history. He has also dismantled all the protections in the Senate nomination procedure intended to keep judicial riffraff out. With those safeguards gone, the Senate Republican majority is mainlining conservative judges like an addict.

After some scripted remarks about the economy, Trump waded into the culture war:

“We salute our great American flags. We put our hands on our hearts for the Pledge of Allegiance — and we all proudly stand for the National Anthem.”

Personally, I don’t stand or put my hand over my heart for the pledge, because we are not “one nation, under God.” More and more students in public schools are refusing to stand for the pledge. too.  A recent survey found that 21 percent of Americans born after 1999 are atheist or agnostic. Another 14 percent have no religious affiliation.

I wouldn’t be surprised to find that the Trump-evangelical Christian alliance, which is so distasteful to most Americans, is driving some of that disbelief.

“Above all else we know that faith and family, not government and bureaucracy, are at the center of American life. We know that. Because in America, we don’t worship government, we worship God.”

This line got a standing ovation, which is kind of amazing given how frequently we’ve heard it and how ridiculous it is on its face. Is there anyone who thinks we worship government?

“Our nation’s motto is ‘In God We Trust.’ And this week, our nation lost an incredible leader who devoted his life to helping us understand what those words really mean. Leader, he was a leader, he was a great man. We will never forget the historic crowds, that voice, that energy, and the profound faith of a preacher named Billy Graham.”

That motto is a shining beacon of Christian hypocrisy, one we’ve addressed many times before. The motto’s sentiment is toxic. When Parkland survivors and activists traveled to Tallahassee to demand action, not prayers, the House did just the opposite. These survivors watched from the gallery as the House refused to even consider and debate an assault weapons ban. The next day, as a substitute for genuine action, the House voted to display “In God We Trust” in all public schools—as if any god has ever stopped bullets from tearing into our schoolchildren.

The idea embodied by this motto is cowardly. As the New York Daily News boldly stated months ago, “God’s Not Fixing This.” We can’t trust in a deity, it’s up to us.

“And a very special tribute because it’s almost never done. On Wednesday, we will celebrate Billy Graham’s life as he lies in honor in the Rotunda of our Capitol. … Not everybody deserves it, but very few people … very few people are so honored. It is a big thing. He almost more than anybody you could think of, he deserves to be in the rotunda.”

FFRF has written a letter to Congress asking it to reconsider this move. Billy Graham is on the wrong side of history. He was a vicious anti-Semite when he thought people weren’t listening. He opposed gay marriage. He worked to infect our secular government with religion, wanting laws that would let him “see the leaders of our country kneeling before almighty God in prayer.”

The day after Martin Luther King Jr. wrote his letter from the Birmingham Jail, a letter addressed to white religious leaders like Graham who stood on the sidelines and “mouth pious irrelevancies and sanctimonious trivialities,” Graham mouthed a few more, arguing that MLK should “put the brakes on a little bit.”

As FFRF wrote to McConnell and House Speaker Paul Ryan, Billy Graham believed in his god and people listened to him. But that is not worthy of praise or a spot in the U.S. Capitol, however temporary. Graham was a homophobic anti-Semite who sought to undo the only sure way to guarantee freedom of religion: a government that was free from religion.

“All over the country, cities small and large, Americans have all reached out to our Creator for strength, inspiration, and healing. In times of grief and hardship, we turn to prayer for solace and comfort. In recent days, our entire nation has been filled with terrible pain and sorry over the evil massacre in a great community, Parkland, Florida.”

FFRF addressed this in our latest episode of Ask An Atheist. Too often, religion is a substitute for action, and when children are dying, that makes religion fatal.

As we’ve said before, Trump’s religion is a political expedient. People who believe otherwise are begging to be lied to.

Andrew L. Seidel is a constitutional attorney and the Director of Strategic Response at the Freedom From Religion Foundation. His first book The Founding Myth: Why Christian Nationalism Is Un-American was burned by a Tennessee preacher. His second book, American Crusade: How the Supreme Court is Weaponizing Religious Freedom, is due out in 2022. He's won numerous academic awards and holds two law degrees: a J.D. magna cum laude from Tulane University Law School and an L.L.M. from Denver University’s Sturm College of Law. Andrew has a B.S. in neuroscience and environmental studies from Tulane. Before dedicating his life and law degree to keeping state and church separate, Andrew was a Grand Canyon tour guide and an accomplished nature photographer. Andrew has appeared on Fox News to debate Bill O’Reilly, MSNBC, and hundreds of other media outlets speaking on behalf of FFRF.
All Articles by this author
PrevPreviousLesson of Florida’s hypocritical vote: Put ‘God’ back in that closet, fast!
NextOur Olympian spiritNext