Trump inauguration shouldn’t have a prayer, but instead it’ll be a religious circus 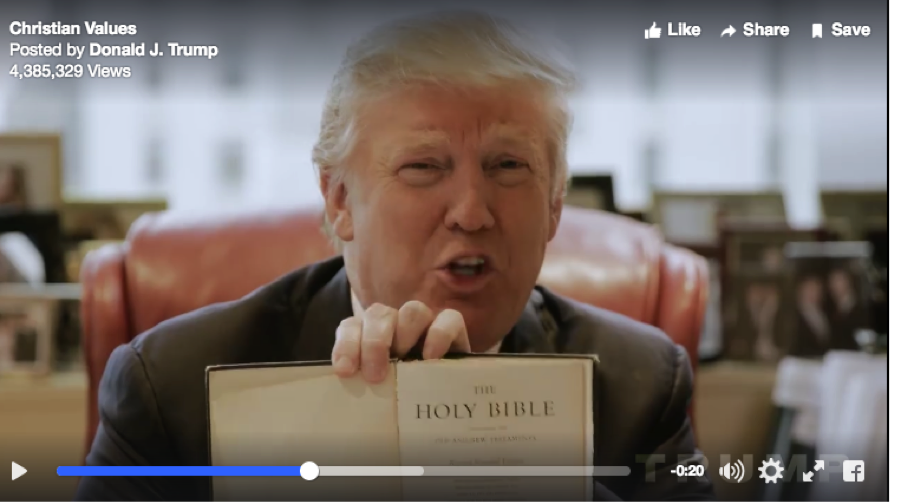 Donald Trump will start off his presidency by inserting religion into what should be the most secular of events — his public Inaugural on Friday. That’s not so unusual, unfortunately. What’s different about Trump’s choice of prayer officiants is that there are so many — six in all: five Christian leaders, plus a rabbi. None is a mainstream Protestant. As National Public Radio reported, three or four clergy, at most, is far more typical. The Mormon Tabernacle Choir, inevitably, will also be on hand.

FFRF’s first official letter of the year was sent to Donald Trump making him aware that the religious verbiage and devotionals at public presidential inaugurations should go. FFRF reminded him that the Constitution dictates an oath as secular as the Constitution itself (no references to swearing to a deity or on a bible).

As a candidate, Trump released a video just two days before the Iowa caucus thanking evangelists and promising to “never let you down.” In the video he held up a bible he said his mother had given him, stating “it’s just very special to me.” One assumes it will be this bible that will show up on Jan. 20 when, showing no sense of irony, Trump pledges, on a bible, to uphold our entirely secular and godless Constitution.

Mike Pence has promised to take his (likewise supposedly) secular oath of office with a bible once used by Ronald Reagan. What’s disturbing is his decision to take an oath upon a bible open to II Chronicles 7:14, just as Reagan did. This passage castigates people to “turn from their wicked ways”:

“If my people, which are called by my name, shall humble themselves, and pray, and seek my face, and turn from their wicked ways; then will I hear from heaven, and will forgive their sin, and will heal their land.’’

Clearly, with all this bible thumping and with Trump’s sextet of preachers and pastors, what should be a civic ceremony will turn into a religious circus. (That’s not even going into the “hundreds of prayer warriors” said to be traveling to D.C. this week to form “POTUS Shield,” a “prayer shield” around Trump, not to mention the incongruent Bikers for Trump offering to “form a wall of meat!”

• The congregation of Bishop Wayne T. Jackson, the Great Faith Ministries International, was one of the very few black churches candidate Trump visited. Like many of Trump’s pals, Jackson is very wealthy preacher, lives in a multimillion dollar mansion with its own par-3 golf hole and bowling alley, drives luxury cars and famously preaches that Trump’s wealth is a sign he’s divinely blessed. “Donald Trump is an example of someone who has been blessed by God. Look at his homes, businesses, his wife and his jet. You don’t get those things unless you have the favor of God,” he told the Conservative Chronicle. Jackson’s books include “Miracles Do Happen” and he runs The Impact Network, a TV venture. The Detroit Free Press reports that he’s claimed his faith healings can cure diseases like cancer.

• A second “prosperity preacher” who will publicly call on supernatural blessings for the next president of the United States is “his spiritual adviser,” the televangelist Paula White. She heads the New Destiny Christian Center in Apopka, Fla. White, notably, was investigated by a U.S. Senate committee in 2007 for questionable fundraising practices.

This is not the first time White has prayed for him. She cursed critics in a 2015 prayer, inveighing that “any tongue that rises against him will be condemned according to the word of God.” 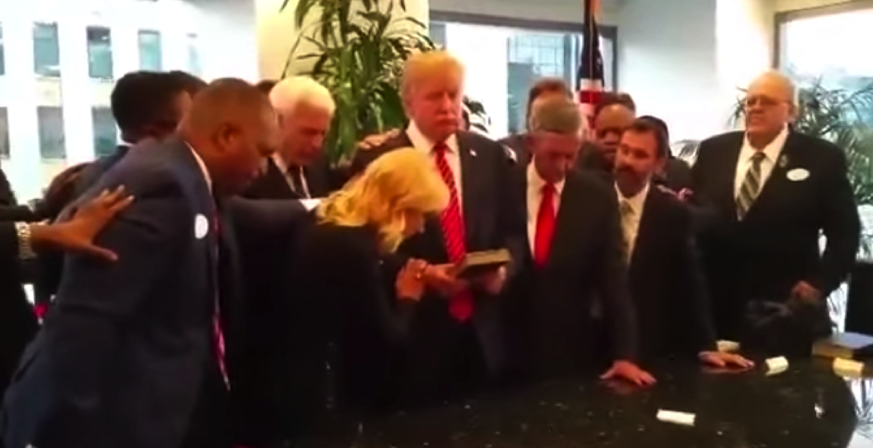 White, prosperity gospel-preaching televangelist Kenneth Copeland and others laid hands on and prayed for Trump at the Trump Towers in 2015. White will offer a reading and an invocation, presumably not the curse she deployed in 2015. She is only the second woman to pray at an inauguration. (Myrlie Evers-Williams, the widow of slain civil rights leader Medgar Evers, prayed at Obama’s second inauguration.) 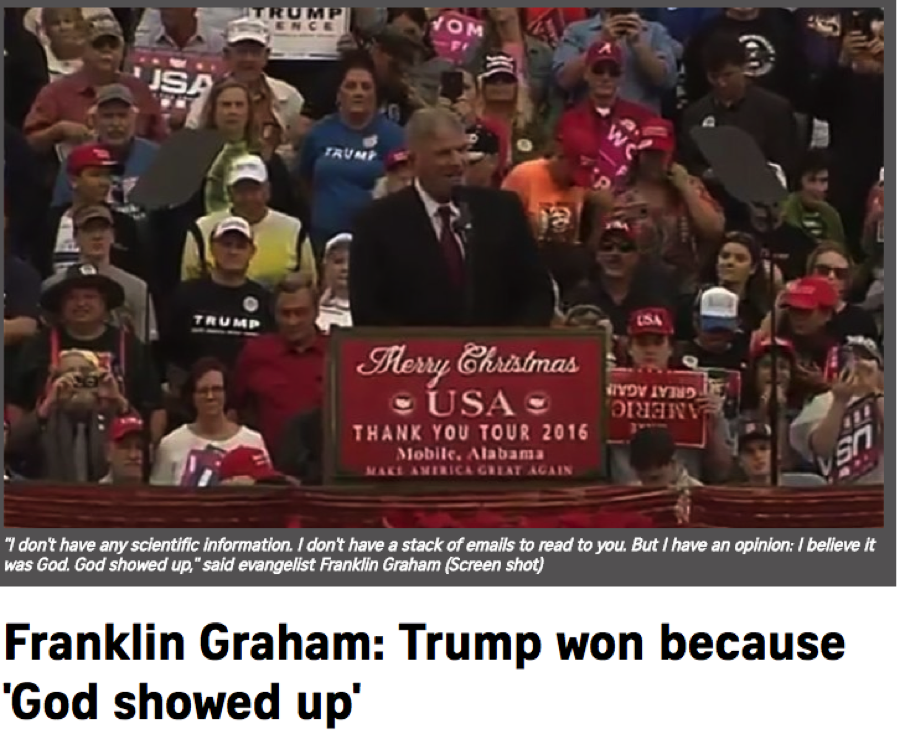 • Franklin Graham, who has turned up at two previous presidential inaugurations. carries on the tradition of cozying up to presidents that his dad, Billy Graham, perfected. Graham told “Lou Dobbs Tonight” that Trump’s election was the result of divine intervention: “God intervened and put his hand on Donald Trump for some reason.” He told thousands during Donald Trump’s final “thank you” rally in December that Trump won the election because of Christian prayer: “I believe it was God. God showed up. He answered the prayers of hundreds of thousands of people across this land who had been praying for this country,” he told folks in Mobile, Ala.

The two men hit it off on issues such as their similar public calls to halt the immigration of Muslims. After the controversy over Trump boasting of sexually assaulting women, Graham wrote on Facebook: “The crude comments made by Donald J. Trump more than 11 years ago cannot be defended. But the godless progressive agenda of Barack Obama and Hillary Clinton likewise cannot be defended.” 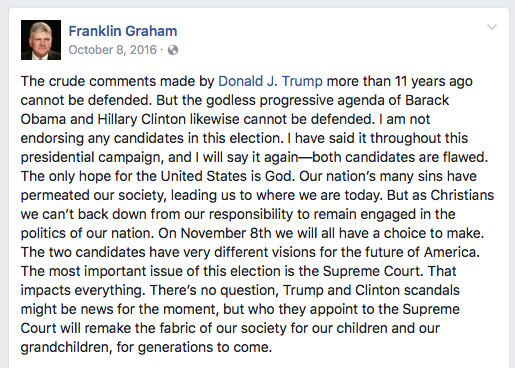 • Rev. Samuel Rodriguez, president of the National Hispanic Christian Leadership Conference, is considered one of the more conservative Hispanic religious leaders. Rodriguez has “trumpeted” the fact that 30 percent of Latinos voted for Trump. Rodriguez is scheduled to offer a reading and an invocation. Rodriguez has been described as “a leader of the Christian Right . . . conservative on just about everything but immigration policy.” He called marriage equality “an attempt to silence the voice of Christianity.”

He warned Hispanic Christians that they would be defying their religious beliefs if they supported Hillary Clinton because she is pro-choice. 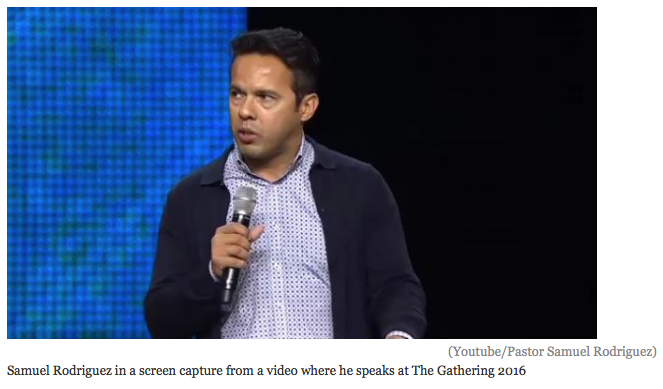 • Cardinal Timothy Dolan, the archbishop of New York, has known Trump a long time and, of course, stands for antediluvian Roman Catholic dogma: anti-abortion, anti-contraception, anti-marriage equality and LGBTQ rights. Dolan is the first Catholic to take part in a presidential inauguration in 40 years. Dolan smarted over leaked emails by the Clinton campaign that were critical of orthodox Catholic dogma.

• Trump, whose daughter Ivanka converted to Judaism when she married Jared Kushner, has also invited a token Jew, Rabbi Marvin Hier, a family friend of Kushner and president of the Simon Wiesenthal Center in Los Angeles. He’s the first rabbi since 1985 to take part in a presidential swearing-in. Hier is supposed to offer readings, recite an original prayer and give “benedictions” to Trump and Pence at the Jan. 20 ceremony. As Forward columnist Peter Dreier put it: “Many Americans will mistakenly view Hier, one of six clergy who will speak at the inauguration, as representing the American Jewish community, even though only 24 percent of Jews voted for Trump.”

As if all of this religiosity were not enough, Trump will attend an interfaith prayer service at Washington’s National Cathedral on Saturday, Jan. 21 (note: This is not a government-owned facility). As Dan Barker and I noted in our letter to Trump: “If you wish to hold a private religious convocation to personally celebrate your inauguration with religion, of course we would have no objection based on the Establishment Clause. (We might question your taste in ultra-conservative clergy.)”

This interfaith prayer event supposedly will include reps from “all religious faiths.” Naturally, many of the rest of us faithless Americans will be out marching, in D.C., or in the hundreds of other women’s marches around the country.

Annie Laurie Gaylor is co-president of the Freedom From Religion Foundation. She co-founded FFRF in 1976 as a college student with her mother Anne Nicol Gaylor. She served as the editor of FFRF’s newspaper, Freethought Today, from 1985-2009. She became FFRF co-president with Dan Barker in 2004. Annie Laurie has authored three books for FFRF: Woe to Women: The Bible Tells Me So; Woe to Women: The Bible Tells Me So; and Women Without Superstition: “No Gods – No Masters”, the first anthology of women freethinkers.
All Articles by this author
PrevPreviousDealing with Trump’s people — and a lot more
NextInauguration of RegressionNext