Skip to content
PrevPreviousAll gods are imaginary
NextThe week that was, digested just for you secularsNext

Transparency is not enough for New York’s yeshiva problem 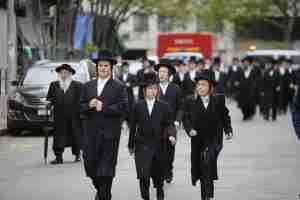 Earlier this week, the New York Times published a blistering exposé on Hasidic Jewish yeshivas in New York that have failed students to a staggering degree. At Hasidic boys’ schools in particular, so much of the high schoolers’ days are spent studying religious texts that there is virtually no time left for basic academics. Graduates are reportedly so bereft of education that their only option for work is to preach the religion they spent all of their school time studying.

This much was already well known to those of us who follow state/church news, since these schools rake in taxpayer dollars while committing this educational catastrophe. But the New York Times piece revealed the staggering extent of this abuse: Over the past four years, New York yeshivas have received more than $1 billion in taxpayer funds, through various programs at the federal, state and local levels.

Compounding the problem is a total lack of transparency. For years, government officials have tried to hold the yeshivas accountable for their obligation to provide basic education to their students, but those efforts have been largely rebuffed. This week, the state Board of Regents voted to require that instruction in nonpublic schools be at least “substantially equivalent” to that in public schools in the same city or district.

This sounds like a much-needed lifeline to yeshiva students, or at least those among them who are not already so far behind that they cannot hope to catch up. But there’s another roadblock in the way: Many of the schools at issue are openly defiant to state oversight, refusing to equip their students to survive in the outside world and daring the state to do anything about it.

“We will sit in jail rather than change our childrens (sic) education,” a sadly ironic sign read at a protest of this week’s vote. “We will not comply, and we will not follow the state education commissioner under any circumstances,” a rabbi bluntly stated in 2018. “We will go out to war against the commissioner in every way.” There is little point in passing rules to improve the transparency and performance of Hasidic schools when those rules are certain to be ignored.

The New York Department of Education could try withholding funding from schools that fail to meet the new standards, but any Supreme Court watcher can predict the phony religious liberty arguments that would be made, echoing arguments that have persuaded the court in recent years: The state is persecuting these schools because of their religion! The schools are being forced to choose between their sincerely held religious beliefs and the tyrannical rules of the state!

The sad reality is that today’s Supreme Court might buy these arguments and force the government to continue funding the yeshivas, although, to be fair, the court’s most favored treatment only goes to their favorite plaintiffs: evangelical Christian, church-going, God-fearing corporations.

But after the court’s recent ruling in Carson v. Makin, states that give taxpayer funds to private secular schools may be forced to fund religious schools, as well. This forces the hands of not just New York, but every state that offers vouchers or otherwise funds private schools. The only way to avoid forcing taxpayers to pay for religious instruction is to stop funding private schools altogether. Supporters of private college prep schools might not love that solution, but it’s the only option until we fix the Supreme Court.

Abandoning private school voucher-like schemes is the right move anyway. Vouchers are an objectively failed experiment academically, and violate religious liberty by forcing taxpayers to pay for religious instruction, a core concern of the Framers when the First Amendment was drafted.

The path forward, therefore, is for New Yorkers to convince their elected representatives — local, state and federal — that public funds should go to public education. This is no easy task in New York, in part because the yeshivas themselves reportedly tell their educationally neglected families how to vote. “Before elections, teachers often give students sample ballots with names of the grand rabbis’ chosen candidates filled in,” the New York Times reports.

Still, this is what must be done, and FFRF recently sent a letter to the New York City Council making this argument. Transparency is not enough. To ensure equitable, adequate and secular education for all students, public funds must go to public schools.

Ryan Jayne received a B.A. in philosophy from the University of Wisconsin-Milwaukee Honors College in 2007. He attended law school at Lewis & Clark in Portland, Ore., where he served as an associate editor for the Animal Law Review at Lewis & Clark and co-founding the Pacific Northwest’s first Secular Legal Society. Ryan graduated cum laude in 2015, began working with FFRF in January of 2015, and became a Diane Uhl Legal Fellow in September 2015, specializing in faith-based government funding. Ryan became an FFRF staff attorney in September 2017 and is a member of FFRF's Strategic Response Team, spearheading FFRF's state-based legislative advocacy.
All Articles by this author
PrevPreviousAll gods are imaginary
NextThe week that was, digested just for you secularsNext