Trading in bigotry for more bigotry in N.C. and Miss. 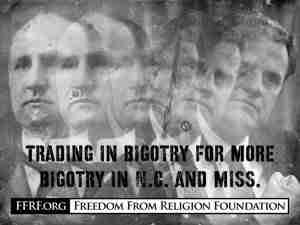 North Carolina is finally removing a statue of a white supremacist from the U.S. Capitol. Mississippi is at long last dropping the Confederate symbol from its state flag. Overt symbols of white supremacy are falling.

Progress demands this iconoclasm. But sadly in these cases we’re trading undisguised bigotry for more subtle — or more politically acceptable — bigotry. North Carolina is ousting a racist for an anti-Semite. Mississippi is replacing the Confederate flag with a related dog whistle that, according to research, has the same racist meaning for many Americans.

I asked Whitehead about this research, and he made the connection perfectly clear to me: “For many white Americans, when they hear ‘In God We Trust’ they hear that this country belongs to a particular group of people, namely, them.” Just as the symbol of the confederacy claimed the state for white supremacists, ‘In God We Trust’ marks the territory of White Christian Nationalists.

For more on Christian Nationalism and the Mississippi flag, check out my conversation with Perry on FFRF’s Ask An Atheist here. And catch Whitehead on Freethought Radio here.

Each state gets to place two historical figures in Statuary Hall in the U.S. Capitol. North Carolina is replacing an old white supremacist, early 20th century Gov. Charles Aycock, with Billy Graham, the anti-Semitic, red-baiting preacher who claimed that those who didn’t adhere to his particular brand of religion will forever burn. Graham also refused to participate in Martin Luther King’s 1963 March on Washington because “Only when Christ comes again will the little white children of Alabama walk hand in hand with little black children.”

Former North Carolina state Sen. Dan Soucek was the initial driving force behind Graham’s placement and was motivated by religion, not a desire for equality: “From a Christian religious point of view, Billy Graham is an undeniable worldwide icon.” That’s problematic in a nation where our government is not  constitutionally permitted to promote religion over nonreligion or one religion over another.

Constitutional problems aside, toppling a white supremacist for Graham is taking two steps forward and at least another step back — perhaps more. After the 1972 National Prayer Breakfast, Graham explained to Nixon his conspiracy theory about Jews and their “stranglehold” on the media. “They’re the ones putting out the pornographic stuff,” said Graham, and then added, “This stranglehold has got to be broken or this country’s going down the drain.” On another tape, Graham says: “The bible talks about two kinds of Jews. One is called ‘the synagogue of Satan.’ They’re the ones putting out the pornographic literature, they’re the ones putting out these obscene films.” (At 12:55.) Nixon said, “They don’t deserve to live.” There’s no defending these comments. On the first recording, Nixon himself adds, “Oh, boy. . . . I can’t ever say that, but I believe it.” They knew what they were saying. Privately-expressed anti-Semitism is still anti-Semitism. If anything, it’s our private statements that more accurately reflect our true character. Graham was a bigot.

Graham also wrote that “you go to hell for rejecting Christ!” He was not shy — if you were not his kind of Christian, you were going to burn: “As a Christian and a preacher of the Gospel, I am always grieved to have to interrupt a marvelous picture, such as eternal life in Heaven, to talk about another eternal place that Jesus calls Hell. It has no similarities to what is typically called home, nor is Hell a resting place, a holding place, or a graveyard. Hell is a burning inferno.” That fear-mongering is, of course, paired with a call to convert (“Right now you can make your decision for Christ and start on the road that leads to a heavenly home.”)

That this was Graham’s theological belief does not make it any less bigoted. Religion and religious beliefs are often prejudiced. Christianity provided the moral justification that American slaveholders needed to treat their fellow humans as property rather than people. It did something similar for segregationists. The point just appeared in the editorial pages of the Washington Post in a conversation between Jennifer Rubin and Robert P. Jones, chief executive and founder of the Public Religion Research Institute and author of the new book, White Too Long:  The Legacy of White Supremacy in American Christianity.

We’re not trading in bigotry for equality. We’re trading it in for more subtle bigotry — for more politically palatable bigotry. It’s up to us to demand better.

Andrew L. Seidel is a constitutional attorney and the Director of Strategic Response at the Freedom From Religion Foundation. His first book The Founding Myth: Why Christian Nationalism Is Un-American was burned by a Tennessee preacher. His second book, American Crusade: How the Supreme Court is Weaponizing Religious Freedom, is due out in 2022. He's won numerous academic awards and holds two law degrees: a J.D. magna cum laude from Tulane University Law School and an L.L.M. from Denver University’s Sturm College of Law. Andrew has a B.S. in neuroscience and environmental studies from Tulane. Before dedicating his life and law degree to keeping state and church separate, Andrew was a Grand Canyon tour guide and an accomplished nature photographer. Andrew has appeared on Fox News to debate Bill O’Reilly, MSNBC, and hundreds of other media outlets speaking on behalf of FFRF.
All Articles by this author
PrevPreviousRacial bigotry is rampant among White Christians
NextVictories, racism, Trump and PelosiNext