Thoughts on mortality: You gotta walk that lonesome valley 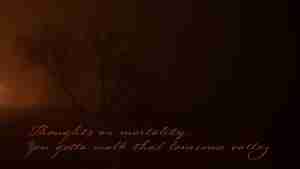 I’ll be 91 in February. It may be my last birthday, or one of a final few, because my actuarial table is relentlessly ticking away.

I have no fear of death. It’s simply the natural end of every life. It awaits all 8 billion of us humans. Nobody can escape it. For now, I’ll just keep flailing away, writing as well as I can, until it becomes impossible.

We science-minded people are confident that no heaven or hell lurks thereafter. Every human personality is created by a brain, the most complex object in the universe. When the brain dies, it’s logical that the personality does likewise; it’s not plausible that it would travel out of the dead body and make a magical journey elsewhere.

Literally hundreds of my friends and colleagues have slipped away. They’re so numerous I keep a “gone” list in my computer to remember them all. I can’t stay off the list much longer.

Just before she died of ovarian cancer, one of my Unitarian friends, Marty Wilson, wrote:

“I often think of humankind as a long procession whose beginning and end are out of sight. We the living … have no control over when or where we enter the procession, or even how long we are part of it, but we do get to choose our marching companions. And we can all exercise some control over what direction the procession takes, what part we play, and how we play it.”

Writer James Baldwin stated in The Fire Next Time:

“Life is tragic simply because the Earth turns and the sun inexorably rises and sets, and one day, for each of us, the sun will go down for the last, last time. Perhaps the root of our trouble, the human trouble, is that we will sacrifice all the beauty of our lives, will imprison ourselves in totems, taboos, crosses, blood sacrifices, steeples, mosques, races, armies, flags, nations, in order to deny the fact of death, which is the only fact we have.”

“When we fully understand the brevity of life, its fleeting joys and unavoidable pains; when we accept the fact that all men and women are approaching an inevitable doom; the consciousness of it should make us more kindly and considerate of each other. This feeling should make men and women use their best efforts to help their fellow travelers on the road, to make the path brighter and easier … for the wayfarers who must live a common life and die a common death.”

Here’s a reason I feel inner peace about my approaching end: Our secular humanist cause has won hundreds of victories during my nine decades, and I have a wishful faith that it will continue to win after I’m gone.

The movement surged three centuries ago with the Enlightenment, when radical thinkers challenged the divine right of kings and the stupid tyranny of the church. They trusted science. America’s Founders, mostly Deists, transformed those ideas into the first modern secular democracy. Ever since, there have been marked improvements in human rights, increased equality and a better life for everyone. Slavery was wiped out, women gained the right to vote, couples were allowed to use birth control, Social Security pensions were created for retirees, labor unions were allowed to organize, job protections of many sorts developed, gays first escaped prison, then were allowed to marry, stores were allowed to open on the Sabbath, Blacks defeated segregation and won equal legal standing, Medicare and Medicaid brought medicine as a human right, religious indoctrination was banned from public schools, etc., etc. Secular humanists fought for all this progress.

Now in this 21st century, supernatural Christianity is collapsing rapidly in Western democracies. Intelligent people no longer swallow it.

I have hopeful confidence that the struggle to help humanity and wipe out fairy tales will keep on winning, without me.

A final frustration, though: Existentialism says we are doomed to live our entire lives and die without knowing why we are here or why the universe is here. Today, in these superscientific times, we still don’t know, and I’ll never know.

James A. Haught, syndicated by PeaceVoice, was the longtime editor at the Charleston Gazette and has been the editor emeritus since 2015. He has won two dozen national newswriting awards and is author of 12 books and 150 magazine essays. He also is a senior editor of Free Inquiry magazine and was writer-in-residence for the United Coalition of Reason.
All Articles by this author
PrevPreviousWeekly Wrap: Uber and Lyft, clergy abuse, the Supreme Court and an (almost) Broadway appearance
NextContraception access needs to be defendedNext