Skip to content
PrevPreviousThe coronavirus proves that the Christian god does not exist
NextFederal lawsuit victories, Earth Day, a classic movie — and, of course, the pandemicNext

The search for meaning in these times 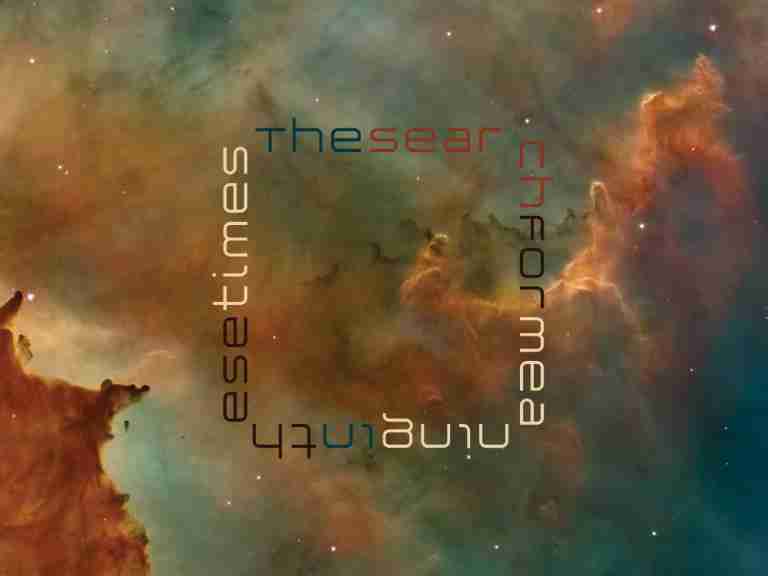 Young seekers of truth go through a phase of wondering whether life has any discernible meaning. They’re quite certainly thinking about this even more intensely now with the pandemic currently raging all around us.

Why are we here? Why does the universe exist? Is there a purpose to it all? These are the ultimate questions, overarching all others.

The seekers usually plunge into philosophy, and spend years sweating. In the end, most of them emerge (as I did) with no better answer than when they began — and a feeling that they wasted a lot of time and effort. Omar Khayyam felt the same way 900 years ago:

Myself when young did eagerly frequent

About it and about, but evermore

Came out by the same door as in I went.

However, despite this futility, I think intelligent people can address the meaning-of-life question sensibly, without bogging down in philosophical stewing and hair-splitting. That’s what I’d like to do now: just spell out what’s knowable, as I see it.

First, the vast majority of humanity — the religious believers — needn’t ask the meaning of life. Churches, mosques and temples tell them the answer. Priests and scriptures say a magical, invisible God created the universe, and put people here to be tested. This supernatural explanation, or some other mystical version, is accepted by the preponderance of the species.

Therefore, we unsure people are doomed to be seekers, always searching for a meaning to life, but never quite finding one. I’ve been going through it for half a century. Now, I think I can declare that there are two clear answers: (1) Life has no meaning. (2) Life has a thousand meanings.

First, the lack of meaning: As for an ultimate purpose or transcending moral order, all the great thinkers since ancient Greece have failed to find one. The best philosophical minds have dug into this for 25 centuries, without success. There have been endless theories, but no clear answer. Martin Heidegger concluded that we are doomed to live our whole lives and die without knowing why we’re here. That’s existentialism: All we can really know is that we and the material world exist.

As we learn scientific facts, we realize that the universe is horribly violent, with stars exploding or disappearing into black holes. Here on Earth, nature can be equally monstrous. Both the cosmos and our biosphere seem utterly indifferent to humanity, caring not a whit whether we live or die. Earthquakes and hurricanes and volcanoes, for instance, don’t give a damn whether they hit us or miss us. Tigers, tapeworms and bacteria consider us food.

As for morality, I don’t think any exists, independent of people. It’s merely rules that cultures evolve for themselves, in their attempt to make life workable.

Take human rights. Thomas Jefferson said all people “are endowed by their Creator with certain unalienable rights.” But I think Jefferson was wrong. There’s no evidence that any Creator endowed anyone with any God-given rights. What unalienable rights were enjoyed by Africans who were sold into slavery — including those on Jefferson’s Monticello plantation?

What’s the meaning of life to the tens of thousands who have been felled by COVID-19 — and the millions who died in the 1918 flu epidemic and in the Black Plague? Or the 20,000 victims the Aztecs sacrificed annually to the invisible flying serpent? Or the 20,000 the Thugs strangled for the goddess Kali?

All these horrors have a grotesque absurdity about them. Words like purpose, rights and morals simply don’t apply.

I think these evils make it obvious, by simple logic, that there is no all-loving, all-merciful, all-compassionate, father God. How could a kindly father watch idly while thousands of children die of leukemia, ignoring the desperate prayers of their families? Why would a kindly creator design nature so that lions slaughter antelopes, and pythons suffocate pigs, and sharks rip seals apart — and women die of breast cancer? Only a monster would arrange such monstrosities, and do nothing to save the victims. Therefore, common sense proves that the beneficent modern God is a fantasy who doesn’t exist.

In his book Consilience, the great Harvard sociobiologist E.O. Wilson pointed out that there are two fundamental ways of looking at reality: Empiricism, believing only what evidence tells you — and Transcendentalism, believing that a divine or cosmic moral order exists, independent of humanity. If any proof ever upholds the latter, he said, “the discovery would be quite simply the most consequential in human history.” But it has never occurred.

So much for meaninglessness. Now for the many meanings:

Obviously, the reality of physics, chemistry, biology, atoms, cells, matter, radiation and all the rest of nature imposes a physical order upon us. We can’t escape the laws of nature that govern animals on an orbiting planet. And the inevitability of death is a force stronger than we are. We can’t prevent it. Therefore, whatever meanings exist must apply to the temporary period while we live.

Clearly, there’s a physical and psychological purpose to life. Our bodies need food, and clothing, and shelter, and health, and affectionate comfort, and security from violence and theft, and so forth. We also need gregarious social reaction with people around us. And we need democratic freedoms, so we can speak honestly without fear of punishment — and justice, so we won’t be treated cruelly. These are the humanist purposes of life: to provide better nutrition, medicine, housing, transportation, education, safety, human rights, and all the other needs of people.

To attain this humanist “good life,” the species has a strong need to raise intelligent, healthy, affectionate, responsible children. Sometimes I think the single biggest purpose in life is raising good kids. However, aside from this “housekeeping” type of purpose, is there any greater meaning that transcends our human needs?

I don’t think so. At least, I’ve never been able to find any proof of it. We simply must try to make life as good as possible, and avoid horrors, and care about people, and have fun, even though we know that oblivion is coming.

Make hay while the sun shines — because darkness is on its way. Carpe diem — seize the day for now and live fully while you can. Omar Khayyam saw the folly of aggrandizing oneself, because ill fortune or sickness and death soon wipe it out. And praying for heaven after death is even greater folly: “Fools, your reward is neither here nor there.” So Omar’s solution was to take comfort in verses, wine and his lover “beside me singing in the wilderness — and wilderness is paradise enough.” About 1,400 years before him, the great Greek skeptic Epicurus felt the same way.

So there you have it: We who are not orthodox religious believers can’t find any underlying reason for existence. And we know that death looms ahead. So we must make the interval as enjoyable as possible while we’re here. This view of life’s purpose was summed up a few years ago by the title of a Unitarian seminar: “Dancing Over the Dark Abyss.” And as Zorba the Greek has taught us: What is life, if not to dance?

The column is adapted and updated from a Unitarian talk reprinted in the winter 2001-02 issue of Free Inquiry.

James A. Haught, syndicated by PeaceVoice, was the longtime editor at the Charleston Gazette and has been the editor emeritus since 2015. He has won two dozen national newswriting awards and is author of 12 books and 150 magazine essays. He also is a senior editor of Free Inquiry magazine and was writer-in-residence for the United Coalition of Reason.
All Articles by this author
PrevPreviousThe coronavirus proves that the Christian god does not exist
NextFederal lawsuit victories, Earth Day, a classic movie — and, of course, the pandemicNext