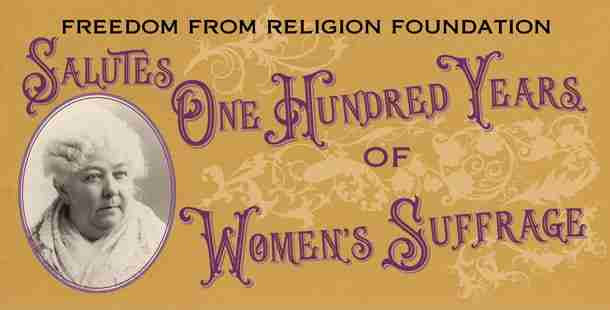 The centennial this month of the 19th Amendment provides an occasion to chart the long, long journey to women’s equality — and to realize how religion has played a deeply negative role.

For millennia, female inferiority was presumed, and mandated, in virtually every human culture. Through most of history, the brawn of heavier males gave them dominance, leaving women in lesser status — often mere possessions of men, confined to the home, rarely educated, with few rights.

In Ancient Greece, women were kept indoors, rarely seen, while men performed all public functions. Women couldn’t attend schools or own property. A wife couldn’t attend male social events, even when her husband staged one at home. Aristotle believed in “natural slaves” and wrote that women are lesser creatures who must be cared for, as a farmer tends his livestock.

Up through medieval times, daughters were secondary and inheritances went to firstborn sons. Male rule prevailed.

As the Enlightenment blossomed in the 1700s, calls for women’s rights emerged. France’s Talleyrand wrote that only men required serious education — “Men are destined to live on the stage of the world” — and women should learn just to manage “the paternal home.” This infuriated England’s rebellious Mary Wollstonecraft (1759-1797), who wrote A Vindication of the Rights of Woman, contending that women have potential for full public life. (Her daughter married poet Percy Shelley and crafted Frankenstein.)

Reformer John Stuart Mill (1806-1873) wrote The Subjugation of Women in 1869, after his wife had authored The Enfranchisement of Women, calling for a female right to vote. As a member of England’s Parliament, Mill sought voting by women and became president of the National Society for Women’s Suffrage. “The legal subordination of one sex to another is wrong in itself, and now one of the chief hindrances to human improvement,” Mill wrote.

The Western world wrestled nearly a century before women finally won the right to vote.

Elizabeth Cady Stanton (1815-1902) was the bright daughter of a New York state judge. Few schools admitted girls, so her father arranged for her to attend male-only Johnstown Academy. The daughter grew outraged by laws forbidding women to own property or control their lives. She married an abolitionist lawyer and accompanied him to London for a world conference against slavery. Women weren’t allowed to talk; they sat silent behind a curtain while men spoke.

Back in America, she joined with some Quaker friends to organize an 1848 assembly at Seneca Falls, N.Y., that launched the modern women’s equality movement. Frederick Douglass championed Stanton’s controversial plank urging delegates to demand female suffrage. Stanton was later joined by Unitarians Susan B. Anthony, Lucy Stone and Ralph Waldo Emerson, among others, in a lifelong struggle for female rights.

Stanton bitterly accused patriarchal Western religion with keeping women subjugated. In her 1898 memoir, Eighty Years and More, she wrote: “The memory of my own suffering has prevented me from ever shadowing one young soul with the superstitions of religion.” In Free Thought magazine, she stated: “The bible and church have been the greatest stumbling blocks in the way of women’s emancipation. … The whole tone of church teaching in regard to women is, to the last degree, contemptuous and degrading.” Stanton said that religions are mere “human inventions” — mostly invented by men — concocting Original Sin to lay blame on Eve and women. She asserted that “the clergy baptized each new insult and act of injustice in the name of the Christian religion.”

The Civil War temporarily suppressed suffragist efforts, but they flared anew when the 15th Amendment, ratified in 1870, allowed black men to vote, but not women of any color. Demands snowballed for decades. Mark Twain gave a speech calling for female voting. Various suffrage groups took to the streets, some more militant than others. The National Woman’s Party led by Alice Paul was the toughest, picketing outside the White House and enduring male jeers and physical assaults.

President Woodrow Wilson tried to ignore the clamor. When a Russian delegation visited the White House, pickets held banners saying “America is not a democracy. Twenty million women are denied the right to vote.” The protesters staged Washington parades that were attacked by mobs, sending some to hospitals. Women pickets on sidewalks were hauled to jail on absurd charges of “obstructing traffic.” When the protesters refused to pay fines, they were locked up with criminals. Paul was sentenced to seven months. She went on a hunger strike, and was force-fed.

Finally, Wilson reversed position in 1918 and supported female enfranchisement. Congress approved the 19th Amendment, and it was ratified in 1920, letting women vote. The United States was not the first nation where women won full legal enfranchisement, but it was one of the first.

Around the world, various other nations followed, some more slowly than others. In Switzerland, women didn’t gain full ballot rights in all districts until 1991. Saudi Arabian women finally achieved only partial voting in December 2015. And as women of color have noted, many Black, Asian-American and Native American women were denied the vote promised them by the 19th Amendment, either by racist laws or by Jim Crow tactics, for as many as three more generations.

An Amnesty International report from not too far back stated:

In the United States, a woman is raped every six minutes; a woman is battered every 15 seconds. In North Africa, 6,000 women are genitally mutilated each day. This year, more than 15,000 women will be sold into sexual slavery in China. Two hundred women in Bangladesh will be horribly disfigured when their spurned husbands or suitors burn them with acid. More than 7,000 women in India will be murdered by their families and in-laws in disputes over dowries. Violence against women is rooted in a global culture of discrimination which denies women equal rights with men and which legitimizes the appropriation of women’s bodies for individual gratification or political ends. Every year, violence in the home and the community devastates the lives of millions of women.

Obviously, the battle for full women’s equality still isn’t over.

James A. Haught, syndicated by PeaceVoice, was the longtime editor at the Charleston Gazette and has been the editor emeritus since 2015. He has won two dozen national newswriting awards and is author of 12 books and 150 magazine essays. He also is a senior editor of Free Inquiry magazine and was writer-in-residence for the United Coalition of Reason.
All Articles by this author
PrevPreviousThe similarities between QAnon and evangelism
NextThe disgrace and fall of FalwellNext