The Internet gives doubters a home 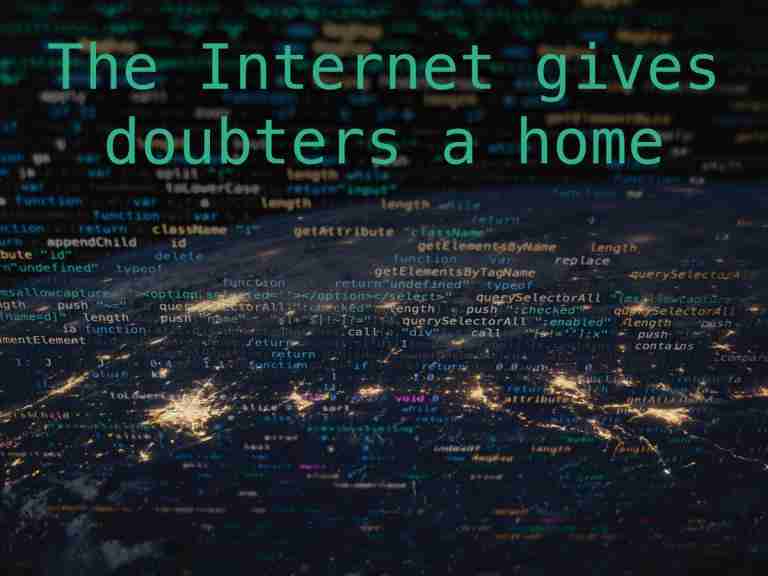 Perhaps 65 million U.S. adults now say their religion is “none.” However, attempts to mobilize this swarm have mostly fizzled.

People who quit churches, or never attended, are free spirits scattered willy-nilly everywhere, almost untraceable and unorganizable. Well, if in-person gatherings rarely work for skeptics, I think there’s a better “glue” to unite millions of freethinkers worldwide. It’s the colossal internet, the enormous portal for all of humanity, which has acquired even more of a central role in our lives because of the pandemic.

In just a generation, the internet has grown almost too immense to grasp. There are at least 2 billion websites, with about 500 million of them “blogs” delivering pitches and commentaries on every imaginable topic.

Atheism and humanism thrive in this free-for-all chaos, alongside other “isms.” Hundreds of different doubter sites skewer supernatural mumbo-jumbo daily. Most every attack on magical dogmas draws comments from readers, making them active participants in a global skeptic dialogue. It’s a beehive of freethought that buzzes day and night, nonstop. Thus the internet makes a home for all of us who cannot swallow church miracle claims.

Further, there’s scientific evidence that the internet actually creates atheism. It exposes browsers to many sorts of weird beliefs — as well as to attacks on those beliefs.

“The internet provides opportunities to find information about people of other religions (and none), and to interact with them personally,” Downey wrote. “Internet use decreases the chance of religious affiliation.”

He estimated that one-fourth of the rise in “Nones” was caused by internet use. Later, researchers at the Baptist-run Baylor University corroborated Downey’s premise. They published a survey report in the Journal for the Scientific Study of Religion supporting his findings.

“Increases in internet use correlate with a loss of religious affiliation,” lead researcher Paul McClure said, “and I also discovered that individuals who spend lots of time online are less likely to be religious exclusivists, or, in other words, they are less likely to think there’s only one correct religion out there.”

Translation: Inquiring minds of internet users make them doubt claims that only Christians go to heaven — and other such absurdities.

There you have it: The internet provides a worldwide haven for freethought — and it also creates more freethought. If in-person meetings can’t make a sanctuary for doubters, cyberland can.

This column is adapted and updated from a piece originally published on Aug. 12, 2019, at Daylight Atheism/Patheos.

James A. Haught, syndicated by PeaceVoice, was the longtime editor at the Charleston Gazette and has been the editor emeritus since 2015. He has won two dozen national newswriting awards and is author of 12 books and 150 magazine essays. He also is a senior editor of Free Inquiry magazine and was writer-in-residence for the United Coalition of Reason.
All Articles by this author
PrevPreviousThanksgiving Day — A modest proposal
NextMy adventures in the Bible BeltNext