The Inquisition and witch hunts marred Europe for centuries 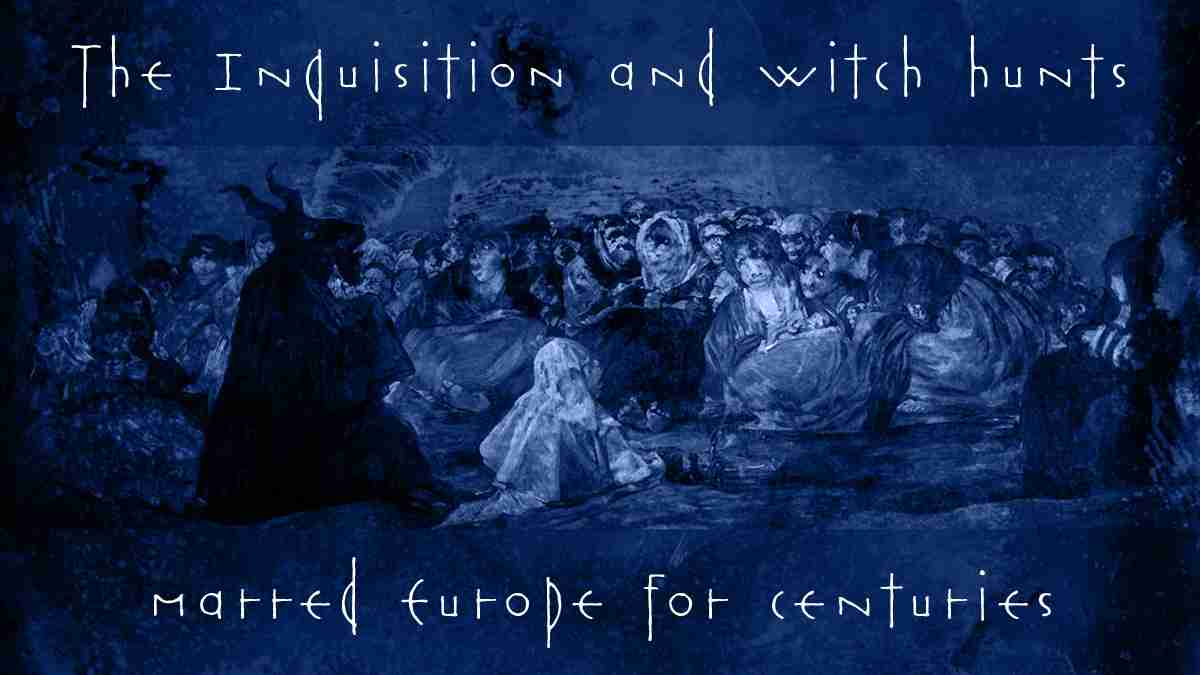 After killing Muslims in Crusades and Jews in massacres, Christians began murdering fellow Christians who deviated from official dogma. One deviant group was the Cathari, or Albigenses, so named because they centered around Albi, France. In 1208, Pope Innocent III declared an “internal crusade” to exterminate Albigenses. An army of 20,000 captured the city of Beziers. When commanders asked the papal legate how to distinguish the faithful from heretics among captives, he replied: “Kill them all. God will know his own.” It was done.

Various other internal crusades were fought against sects following unapproved beliefs. Finally, the Holy Inquisition was mobilized to ferret out heretics and execute them. Pope Innocent IV authorized torture in 1252, and Inquisition dungeons became places of horror. Screaming victims usually confessed to escape the pain. Then they were led in a holy procession (“auto de fe” — act of faith) to be burned at the stake.

The Inquisition had three phases: the medieval pursuit and execution of nonconformists, then the Spanish Inquisition in the 1400s, mostly against secret Jews and Muslims, and finally the Roman Inquisition, after the Reformation, that purged hidden Protestants. Uncountable thousands were put to death.

Spaniards brought the Inquisition to American colonies to pursue Natives who returned to tribal beliefs. Hundreds of heresy trials were recorded in Mexico in the 1500s.

In 1484, Pope Innocent VIII issued an infallible bull asserting that many people “abandon themselves to devils, incubi and succubi, and by their incantations, spells, conjurations and other accursed charms and crafts, enormities and horrid offenses, have slain infants yet in the mother’s womb, as also the offspring of cattle, have blasted the produce of the earth, the grapes of the vine, the fruits of the trees, nay, men and women, beasts of burden. … They hinder men from performing the sexual act and women from conceiving.”

Accused women were stripped by inquisitor priests who searched their bodies for “witch marks” or “witch teats” where they allegedly suckled demons. They were tortured into confessing that they copulated with Satan, changed into animals, blighted crops, made themselves invisible, or flew through the sky. They also were forced to name alleged fellow witches — who were arrested and given the same treatment.

When the Holy Inquisition branched into finding and killing witches, it followed the bible’s mandate: “Thou shalt not suffer a witch to live.” The witch hunts became a ghastly phase of history. Medieval historian Anne Barstow estimates that 100,000 women were executed.

In 1583 in Vienna, for instance, a 16-year-old girl suffered stomach cramps. Jesuit priests exorcized her for eight weeks, then announced that they had expelled 12,652 demons from her — demons that her grandmother had kept as flies in glass jars. The grandmother was tortured into confessing that she had sex with Satan, and was burned at the stake.

Mark Twain wrote in Europe and Elsewhere: “The Church … gathered up its halters, thumbscrews and firebrands, and set about its holy work in earnest. She worked hard at it night and day during nine centuries and imprisoned, tortured, hanged and burned whole hordes and armies of witches, and washed the Christian world clean with their foul blood. Then it was discovered that there was no such thing as witches, and never had been. One does not know whether to laugh or to cry.”

In his inimitable way, Twain aptly summed up the madness.

This column has been adapted from a March 18, 2019, piece written for Daylight Atheism.

James A. Haught, syndicated by PeaceVoice, was the longtime editor at the Charleston Gazette and has been the editor emeritus since 2015. He has won two dozen national newswriting awards and is author of 12 books and 150 magazine essays. He also is a senior editor of Free Inquiry magazine and was writer-in-residence for the United Coalition of Reason.
All Articles by this author
PrevPreviousAbortion restrictions affect childbearing choices
NextJoint missions, boycotts, awards, media mentions, and a jazzy TV treatNext