Skip to content
PrevPreviousA good victory, inspiring life stories, a bad decision and an ugly conference
NextWhy I am an atheistNext 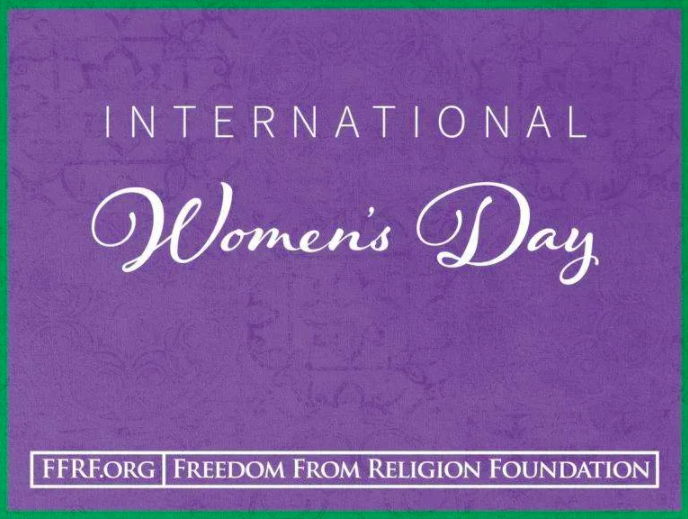 International Women’s Day (March 8) is a global celebration of the social, economic, cultural and political achievements of women, as well as a call for gender parity. Since 1975, the United Nations has declared International Women’s Day as an official observance day and in many countries, it’s a national holiday. It dates back to Feb. 28, 1909, when the first National Women’s Day took place in New York City. These roots are intertwined with the activist work of freethinking women. And it is in the spirit of these secular women that we can continue the much-needed work for equality.

On Feb. 28, 1909, thousands of labor organizers, socialists and suffragists united to honor the female garment workers who had gone on strike the previous year to protest abhorrent working conditions. One of the speakers was freethinking writer and feminist , who the congregation of the Parkside Church in Brooklyn, “It is true that a woman’s duty is centered in her home and motherhood . . . [but] home should mean the whole country and not be confined to three or four rooms or a city or a state.”

British suffragist and atheist Sylvia Pankhurst also participated in a Woman’s Day march. Two years later in Boston, she and immigrant women from Latvia and Finland, as well as members of Harvard’s Socialist Club,

The woman’s day concept reverberated across Europe. In August 1910, women from 17 countries met at the second International Conference of Socialist Working Women in Copenhagen and organized the first, official International Women’s Day for the following year. In fact, more than 1 million people participated in those rallies on March 19, 1911. Mill workers’ strikes continued to further the women’s movement. And freethinking women continued to play a role, such as when Margaret Sanger as a nurse traveled to Lawrence, Mass., to safely escort the children of striking textile workers to New York City. This was the strike whose slogan, “Bread and Roses,” inspired the moving poem by James Oppenheim. It was turned into a song that became one of the anthems of the women’s movement often played on International Women’s Day. Sanger would go on to spearhead the birth control movement so essential for women’s freedom. And while International Women’s Day was put on hiatus during World War I, Rosa Luxemburg, a skeptic who didn’t ascribe to religion, used it as focus for anti-war rallies.

However, it was on Feb. 23, 1917 (or the equivalent of March 8 on the Russian calendar then), that International Women’s Day protests proved to be the most momentous. During these rallies, more than 40,000 Russian men and women demanded universal suffrage, which was granted thanks to the mobilization. Alice Paul, an American agnostic, suffragist and founder of the National Woman’s Party, was greatly influenced by these protests and coordinated with suffragists in Britain, such as Sylvia Pankhurst. Three years later, women in the United States won the right to vote (it took women in the United Kingdom until 1928 to achieve the vote on the same terms as men). Paul proclaimed: “I always feel the movement is a sort of mosaic. Each of us puts in one little stone, and then you get a great mosaic at the end.”

It is in the spirit of these words that we can recognize the global impact of women coming together to challenge the status quo. Indeed, that is the 2021 International Women’s Day theme: #ChooseToChallenge, which urges participants to condemn inequality so that we can create a more inclusive world. A major challenge to that equitable worldview is the imposition of religion on women’s rights. From marriage to reproductive health, child care and working conditions, religious ideology permeates legislation. Specifically in terms of reproductive rights, two particularly oppressive bills have been around nearly as long as the United Nation’s 1975 declaration of International Women’s Day: the Hyde Amendment and the Mexico City Policy. These bills impact women around the globe.

The Hyde Amendment, which was introduced by staunch Catholic Rep. Henry J. Hyde in 1977, restricts federal funding for abortion. This means that women on Medicaid whose pregnancy may compromise their health are ineligible for subsidized funding. This ban extends to federal worker health plans, women in federal prisons, the military, the Peace Corps volunteers, in the Children’s Health Insurance Program and international family planning programs that use non-U.S. funds to perform or advocate for abortion. It also applies to Native American women on the Indian Health Services program.

The Mexico City Policy, commonly known as the Global Gag Rule, was first introduced by President Reagan in 1984. Reagan, who the Religious Right refers to as “Father of the Pro-Life Movement,” prohibited U.S. funding to any foreign nongovernmental organization that so much as mentions “abortion.” This bill has been reintroduced with every Republican president since 1984. Both of these bills result in countless health complications and deaths for women.

The Equal Access to Abortion Coverage in Health Insurance (EACH Woman) Act would end the Hyde Amendment and the Global Health, Empowerment, and Rights (Global HER) Act would permanently end the Global Gag Rule. In honor of the #ChooseToChallenge theme, we can call our legislators and ask them to support these bills and end these draconian measures against women.

This International Women’s Day, let’s look to our secular sisters of the past and #ChooseToChallenge religion and its paternalistic influence on women around the world.

BARBARA ALVAREZ is a contributing writer for the Freedom From Religion Foundation. Previously she had held the role as FFRF's inaugural Anne Nicol Gaylor Reproductive Rights Intern, a program set up to memorialize FFRF’s principal founder, who was an early abortion rights activist and author of the book Abortion is a Blessing. Barbara was a major winner in FFRF’s essay competition for graduate students, writing about the bible’s role in the abortion battle.
All Articles by this author
PrevPreviousA good victory, inspiring life stories, a bad decision and an ugly conference
NextWhy I am an atheistNext