The fraud of supernatural beliefs 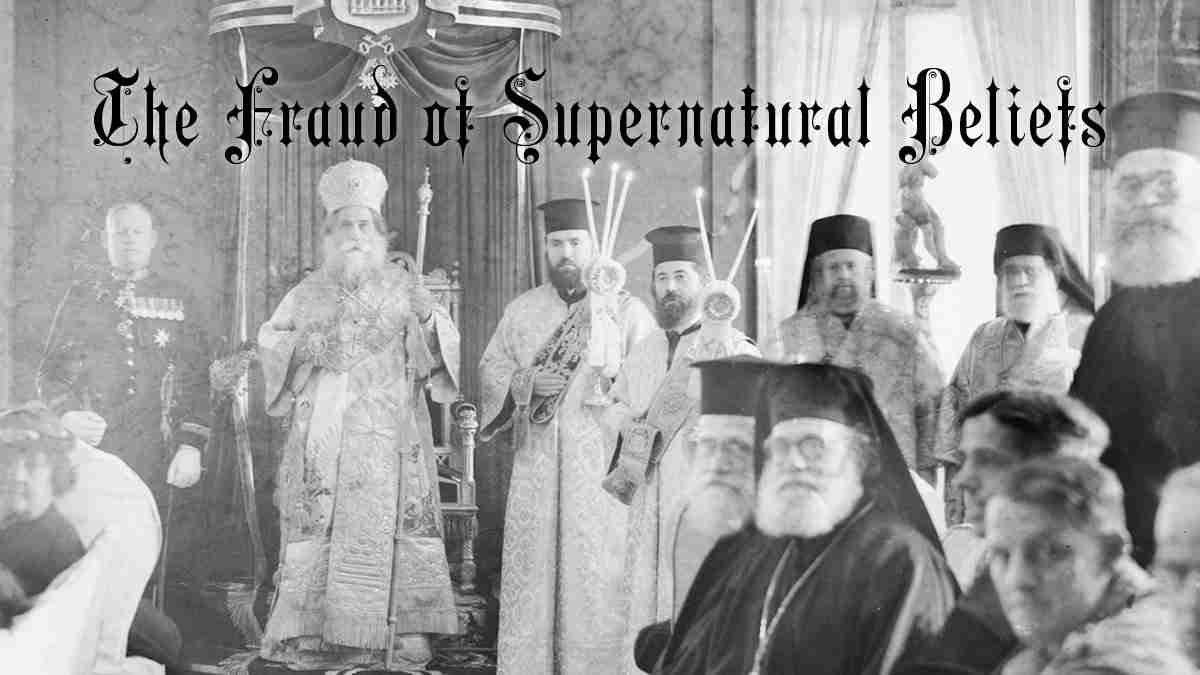 Think of the amazing number of supernatural beliefs held by people. These magical beliefs are basically alike. There’s no tangible evidence for any of them. You can’t test supernatural claims; you’re expected to swallow them by blind faith. The only “proof” for them is that they were “revealed” by some prophet, guru, astrologer, shaman, mullah, mystic, swami, psychic, soothsayer or “channeler.”

Well, considering the human brain’s vaunted power of logic, you’d think that people everywhere would reject magical assertions that can’t be verified. But the opposite is true. Billions of people embrace them. Almost all of humanity prays to invisible spirits and envisions a mystical realm. Virtually every leader invokes the deities. Supernaturalism pervades our whole species, in one form or another.

Around the planet, varying from culture to culture, the phenomenon is nearly universal. Millions of prayers to unseen beings are uttered every day, and millions of rituals performed. This extravaganza requires a vast array of priests and personnel, and a vast array of buildings and facilities. The cost is astronomical. Americans alone give at least $50 billion a year to churches — more than the national budgets of many countries.

In this mighty ocean of spirituality, only a few rebels dare to ask: What if it’s all untrue? What if no spirit realm exists, and the whole enterprise is a fantasy? What if people don’t live after death? What if thousands of years of kneeling, praying, worshiping, sacrificing, fighting holy wars, torturing heretics and the like was, and continues to be, a monumental waste?

What if the emperor has no clothes? What if the whole supernatural spectrum and its huge army of practitioners constitute a fraud?

Well, we skeptics are fairly certain that the entire mystical realm is a delusion, a global self-deception. But the majority of Americans don’t agree with us.

I think intelligent people who look at the world objectively perceive that some things are real, and others are unreal. To me, all supernaturalism belongs in the latter category. It’s a fraud.

So where does that leave us?

America evolves constantly, in subtle increments that aren’t noticed until you look back. In the 1950s, Blacks were forbidden to enter white schools, restaurants, theaters, hotels, neighborhoods, pools and most workplaces. Gays were imprisoned for “sodomy.” Unmarried couples were arrested on “fornication” charges. Looking at the equivalent of a Playboy magazine or R-rated movie could land you in jail. Jews were banned from some clubs and subdivisions. Divorce and unwed pregnancy were hush-hush disgraces. It was a crime in some states to sell condoms, even to married couples.

Today, that era seems as unreal as the Civil War. It slipped away, but most of us were too busy to see it leaving. America is going through another transformation: the retreat of supernatural religion.

Hardly anyone today trusts prayer to cure diseases. In fact, American society is so unanimous on this point that prayer-only parents who let their children die without medical care are prosecuted.

Politicians still invoke deities loudly, but in truth, they don’t really expect heaven to reach down and “bless” America. Government programs are based on pure humanism: people striving to improve daily life, without supernatural aid.

America is becoming like Europe, where supernatural religion has faded to a tiny fringe. One indicator of U.S. change is the disappearance since the 1950s of all those puritanical taboos rooted in church “thou shalt nots.” Another indicator is the traumatic shrinkage of “mainline” Protestantism, once the domain of the elite. I think the decline of those tall-steeple churches means that educated people have less faith in gods and heavens. The Western world is turning more rational, more scientific. Education is dispelling superstition.

America’s Catholic hierarchy still denounces the “sin” of birth control, but members don’t listen. Evangelists still rant against sex, but most Americans no longer think sex is “dirty.” Fundamentalists still call gays evil, but society at large is more tolerant. Preachers proclaim “God’s will” on these topics, but it rings hollow.

Don’t get me wrong — religion and supernaturalism still are mighty. Many millions of Americans worship each Sunday. A politician who admits atheism is drastically reducing the chances of getting elected.

But, insidiously, subconsciously, the scientific outlook is winning among the educated. America is evolving — in a healthy direction. Despite all the pious posturing, if you look carefully through the daily tumult, you can see supernaturalism dying.

Although we questioners are outnumbered, history is moving in our direction. Wise people are abandoning the supernatural. We skeptics of today may be seen like the abolitionists who said slavery was wrong, or the feminists who sought equality for women. They were just a fringe, often ridiculed — but they eventually prevailed over the majority. Now the whole world looks back and knows they were right. I hope that this is our destiny.

This column is adapted from a piece that originally ran in the July 1999 issue of the Britain-based Church & State publication.

James A. Haught, syndicated by PeaceVoice, was the longtime editor at the Charleston Gazette and has been the editor emeritus since 2015. He has won two dozen national newswriting awards and is author of 12 books and 150 magazine essays. He also is a senior editor of Free Inquiry magazine and was writer-in-residence for the United Coalition of Reason.
All Articles by this author
PrevPreviousHuman decency moves civilization forward
NextLife lessons for my childrenNext