Skip to content
PrevPreviousParental consent laws are harmful
NextEhrenreich, Bachmann and the bible as rape manualNext

The endless absurdities of religion 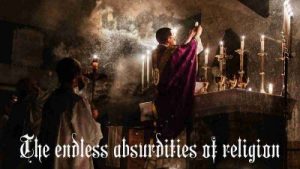 Religious absurdities are too numerous to count.

Shi’ites whip themselves bloody with blades on chains because their hero, Muhammad’s grandson, was killed by a Sunni army 14 centuries ago. Appalachian fundamentalists pick up rattlesnakes (sometimes fatally) because in the Great Commission, Jesus said that believers “shall take up serpents.” Christian Scientists let their children die of simple fevers because they think disease is imaginary. Philippine Christians have themselves nailed to crosses on Good Friday, with real nails through palms and feet. Bible prophecy zealots repeatedly set Doomsday dates, but nothing happens. It goes on and on, ad infinitum. Here are a few other choice examples.

Pentecostalism — in which worshipers compulsively spout incomprehensible sounds called “the unknown tongue” — has become a major world religion. This faith is surging while most other branches of Christianity fade.

Another exception to Christian decline is a steady rise of Mormons. Latter-day Saints claim that an angel named Moroni revealed buried golden plates in New York state and gave Joseph Smith magical stones enabling him to translate writing on the plates. The plates and stones cannot be examined as evidence today because Moroni supposedly took them back to heaven.

Jehovah’s Witnesses contend that, any day now, Jesus will descend from heaven with an army of angels to clash with Satan and an army of demons in the long-foreseen Battle of Armageddon. After the destruction, only 144,000 Jehovah’s Witnesses will survive. This group is yet another that is growing while most of Christianity fades.

The world’s 1.5 billion Catholics are told that the bread-like host wafer actually turns into the real flesh of Jesus — and the communion wine actually becomes the real blood of Jesus — by the miracle of transubstantiation during mass (although they still look like bread and wine). Disputes over this doctrine of “real presence” helped spur the Hussite Wars of the 1400s and subsequent Protestant Reformation.

Creationists of the “young Earth” variety assert that this planet and the universe were magically willed into existence in six literal days, as Genesis says, around 10,000 years ago. They claim that humans and dinosaurs were created in the same week and reject science findings that the universe is more than 13 billion years old. They reject evidence that dinosaurs went extinct at least 60 million years before the earliest humans developed. In fact, they reject any evidence of gradual development, insisting that all animals and plants were created instantly in final form.

Santeria worshipers in Cuba and elsewhere sacrifice numerous dogs, pigs, goats, chickens, etc., to a variety of deities that are partly Catholic saints and partly African forest gods. Bodies of the unlucky animals are dumped into waterways. Santeria (“way of the saints”) is somewhat similar to Voodoo, but arose among slaves of the Spaniards instead of the French.

Many witch killings still occur in tropical Africa, rural India, Papua New Guinea and other places. When disease or drought happens, superstitious villagers blame elderly female “witches” for causing the blight, and mobs murder them. Saudi Arabia still has a law against witchcraft, which results in periodic beheadings.

Cult suicides and murders were an epidemic in the late 20th century. More than 900 believers died in the 1978 Jonestown tragedy. Nearly 100 others perished at Waco’s Branch Davidian compound in 1993. Japan’s Aum Shinrikyo (Supreme Truth) sect planted nerve gas in Tokyo’s subway in 1995, killing 13 commuters and sickening about 1,000.

Tibet’s Buddhists maintain that when an old lama dies, his spirit enters a baby boy being born somewhere. So the faith remains leaderless for several years, until the supposed spirit-receiving boy is found and proclaimed the next lama.

“Advanced-level” Scientologists assert that every human contains thetans, which are spirits or souls that began as space aliens 75 million years ago and were sent to Planet Earth by an evil galactic ruler named Xenu. Scientologists pay money for therapy courses designed to “clear” excess thetans from their bodies.

In the mid-1800s, a Chinese man read Christian pamphlets and had a vision in which God told him he was a younger brother of Jesus — and also commanded him to “destroy demons.” The vision-seer raised a religious army, the Taipings, which conquered much of China before being exterminated. The death toll is believed to have run in the tens of millions.

Aztec priests sacrificed an estimated 20,000 people per year to an invisible feathered serpent and other fantastical gods.

It’s often said that everyone should respect the “great truths” contained in all faiths. If you see any, please let me know.

James A. Haught, syndicated by PeaceVoice, was the longtime editor at the Charleston Gazette and has been the editor emeritus since 2015. He has won two dozen national newswriting awards and is author of 12 books and 150 magazine essays. He also is a senior editor of Free Inquiry magazine and was writer-in-residence for the United Coalition of Reason. This column has been adapted from a piece originally written for the August-September 2016 issue of Free Inquiry.

James A. Haught, syndicated by PeaceVoice, was the longtime editor at the Charleston Gazette and has been the editor emeritus since 2015. He has won two dozen national newswriting awards and is author of 12 books and 150 magazine essays. He also is a senior editor of Free Inquiry magazine and was writer-in-residence for the United Coalition of Reason.
All Articles by this author
PrevPreviousParental consent laws are harmful
NextEhrenreich, Bachmann and the bible as rape manualNext