The endgame for all of these abortion restrictions 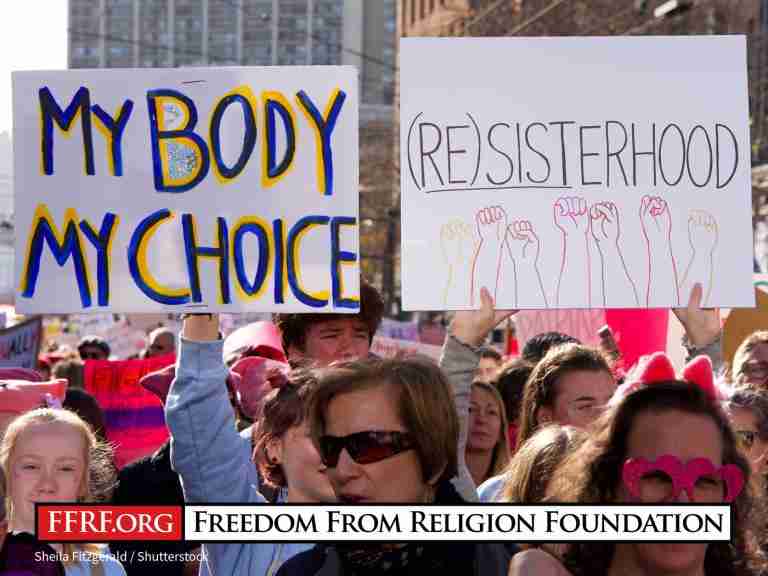 The very real potential that Roe v. Wade will be overturned this year is making anti-abortion legislators and religious extremists giddy with anticipation.

In fact, states are doubling down on abortion bans and restrictions in the hopes that abortion will be outlawed if the Supreme Court rules in their favor. And conservative Christians are not shying away from their overt disdain for reproductive rights. Legislative candidate Garrett Soldano is one of those people.

On a right-wing podcast, Soldano, a chiropractor who describes himself as a “proud Catholic,” recently insisted that rape victims shouldn’t have abortions. Instead, they should accept “that God put them in this moment.” And in the grand tradition of rape apologists, Soldano said that the fetus “may be the next president, may be the next person that changes humanity.” In the interview, Soldano further stated that abortion should be illegal at the moment that “DNA is created.”

Effectively, Soldano treats rape like an act of God and therefore contends that women should not defend themselves. When confronted with his comments, Soldano tweeted that “I believe in the equality of all life and the value of life is not based upon the occasion of its conception, but the sacredness of its essence.”

While Soldano’s comments are disgusting, it is important to note that in the realm of religious extremism, they are not shocking. In fact, his position is explained by recent findings published in The Social Science Journal, “When trauma isn’t traumatic enough: Authoritarianism, sex, and religious influence agreement with Alabama’s HB 314 restrictions on traumatic abortion.” The researchers, who examined the factors that correlate to support of abortion restrictions, found that “evangelical Christians were over four times as likely as others to oppose single, versus married, women’s access to abortion after rape.”

Focus on the Family, a well-known Christian fundamentalist organization that actively lobbies against LGBTQ and abortion rights and has been criticized by psychiatrists, psychologists and social scientists, declares that even 11-year-old rape victims should be forced to carry their pregnancy to term. According to Focus on the Family, “abortion empowers criminal activity,” and fetuses conceived from rape are “a testament to God being a master craftsman.”

To be clear, Soldano would hardly be the first to seek to ban abortion in all cases, including incest and rape. Just this week, a 15-week abortion ban with no exceptions passed a Republican-controlled Senate committee in Florida. Texas’ SB 8, the nation’s most restrictive law that bans abortion at six weeks, also makes no exceptions for rape or incest.

So while Soldano’s comments are repellent, we shouldn’t be surprised. After all, this is the end game of the Religious Right: to totally and completely ban abortion — no exceptions. Never mind the extensive scientific research that shows denying women abortion care leads to death, serious health problems, physical violence, poorer maternal bonding, poverty and food insecurity. To the Religious Right, its faulty interpretation of a bible that never even mentions abortion is of utmost importance.

That is why it is so critical that we use our secular voices to defend abortion rights. I urge you to call your senators and ask them to support the Women’s Health Protection Act to protect abortion rights across the nation from our Christian nationalist-dominated Supreme Court and state legislatures. Even if you have already done so (thank you!), call them again.

If we live in a country that favors religion over democracy, women’s bodies will never be their own.

Note: FFRF does not endorse or oppose candidates.

BARBARA ALVAREZ is a contributing writer for the Freedom From Religion Foundation. Previously she had held the role as FFRF's inaugural Anne Nicol Gaylor Reproductive Rights Intern, a program set up to memorialize FFRF’s principal founder, who was an early abortion rights activist and author of the book Abortion is a Blessing. Barbara was a major winner in FFRF’s essay competition for graduate students, writing about the bible’s role in the abortion battle.
All Articles by this author
PrevPreviousThe end times for religion
NextChristian nationalism, National Prayer Breakfast, Thomas Paine & Ron ReaganNext