The end times for religion 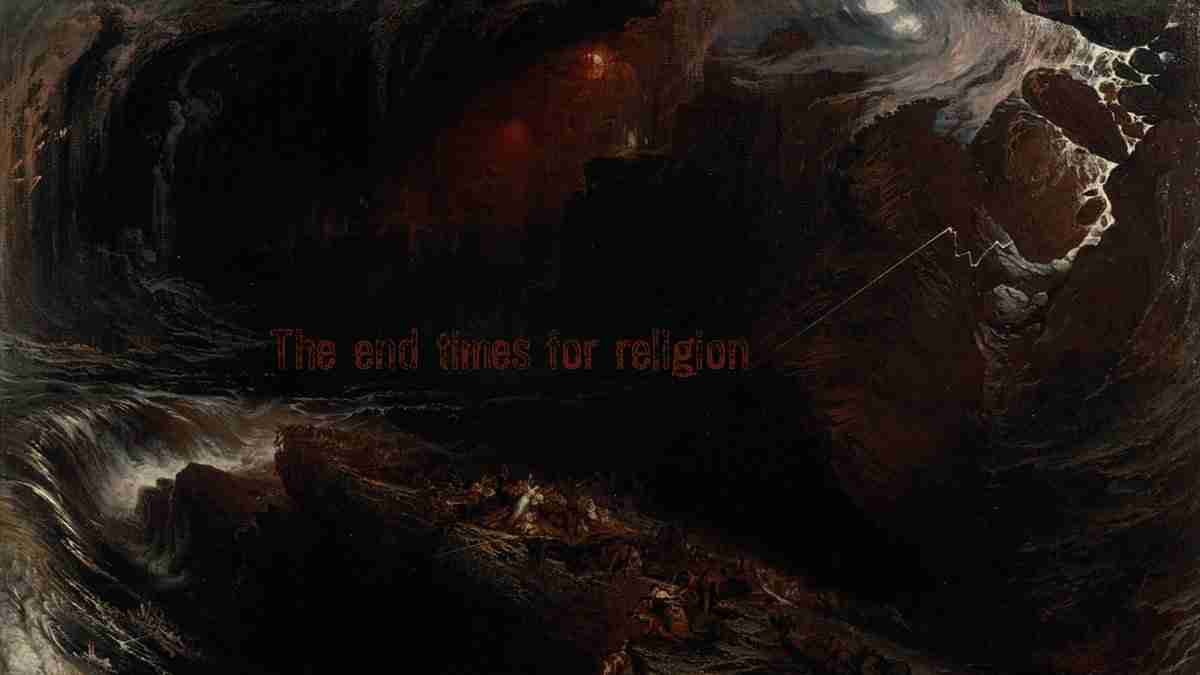 These could be the end times for religion in the West. We’re entering a new Secular Age when magical supernatural beliefs cannot be swallowed by educated people.

Religion is fading in America, as it has done in most Western democracies. Dozens of surveys find identical evidence: Fewer American adults, especially those under 30, attend church — or even belong to a church. They tell interviewers their religion is “none.” They ignore faith.

Since 1990, the “Nones” have exploded rapidly as a sociological phenomenon — from 10 percent of U.S. adults to 15 percent to 20 percent. Now we’ve climbed to 25 percent, according to a 2016 survey by the Public Religion Research Institute. That makes us the nation’s largest faith category, outstripping Catholics (21 percent) and white evangelicals (16 percent). We seem on a trajectory to become an outright majority. America is following the secular path of Europe, Canada, Australia, Japan, New Zealand and other places. The Secular Age is snowballing. Among young adult Americans, the “none” rate is nearly 40 percent, which means the coming generation will be still more secular.

Various explanations for the social transformation are postulated: The internet exposes young people to a wide array of ideas and practices that undercut old-time beliefs. Family breakdown severs traditional participation in congregations. The young have grown cynical about authority of all types. Fundamentalist hostility to gays and abortion has soured tolerant-minded Americans. Clergy child-molesting scandals have scuttled church claims to moral superiority. Faith-based suicide bombings and other religious murders horrify normal folks.

Maybe young people discern that it’s dishonest to claim to know supernatural things that are unknowable. The church explanation — that Planet Earth is a testing place to screen humans for a future heaven or hell — is a silly conjecture with no evidence of any sort, except ancient scriptures. No wonder that today’s Americans, raised in a scientific-minded era, cannot swallow it.

I’m a longtime newspaperman in Appalachia’s Bible Belt. I’ve watched the retreat of religion for six decades. Back in the 1950s, church-based laws were powerful. Even writing about sex was illegal. In 1956, our Republican mayor sent police to raid bookstores selling Peyton Place. Gradually, all those faith-based taboos vanished from society. Religion lost its power — even before the upsurge of “Nones.”

There have long been predictions that religion would fade from relevancy as the world modernizes, but all the recent surveys are finding that it’s happening startlingly fast. France will have a majority secular population soon. So will the Netherlands and New Zealand. The United Kingdom and Australia will soon lose Christian majorities. Religion is rapidly becoming less important than it’s ever been.

Europe — where for centuries people were killed over religion — decided after World War II that religion is inconsequential. Churchgoing collapsed. Pope Benedict XVI complained: “Europe has developed a culture that, in a manner unknown now to humanity, excludes God from the public conscience.” He protested the new European attitude of “disdaining God completely.” Newspaper columnist George Will called the Vatican “109 acres of faith in a European sea of unbelief.”

The secular trend is especially advanced in Scandinavia. Pitzer College sociologist Phil Zuckerman spent months interviewing Danes and Swedes and wrote a book titled Society Without God: What the Least Religious Nations Can Tell Us About Contentment. He says that godless Scandinavians have happy lives in healthy societies with much less crime and other social evils when compared to religious cultures.

This column is adapted from a piece that originally ran in the May-August 2017 issue of The Truth Seeker.

James A. Haught, syndicated by PeaceVoice, was the longtime editor at the Charleston Gazette and has been the editor emeritus since 2015. He has won two dozen national newswriting awards and is author of 12 books and 150 magazine essays. He also is a senior editor of Free Inquiry magazine and was writer-in-residence for the United Coalition of Reason.
All Articles by this author
PrevPreviousFFRF salutes Black History Month and secularism
NextThe endgame for all of these abortion restrictionsNext