Skip to content
PrevPreviousWhere do beliefs come from?
NextTheocrats, Trumpians, philosophy and beliefNext

The doctor might not see you — even in a pandemic 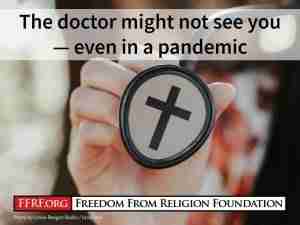 When I was in the emergency room with my husband, it was one of the worst days of my life. He was losing sight in one of his eyes, which was restored after a week of intense treatments. Think about how agonizing the process was, even with a team of dedicated, honest, hard-working professionals. Then, imagine a medical worker, system or administrator deciding to stop treating you because of a religious objection to your very existence.The Trump administration has taken extraordinary measures to weaponize religious freedom (as envisioned with the Denial of Care Rule), using it to justify discrimination, advance Christian Nationalism and erode the separation of state and church. First, Trump signed Executive Order 13798 in May 2017, requiring federal agencies to expand religious exemptions wherever possible. Then the White House Faith and Opportunity Initiative executes that order. Agencies have responded by establishing divisions such as the Religious Liberty Task Force at the Justice Department, the Conscience and Religious Freedom Division at Health and Human Services, and the Commission on Unalienable Rights at the State Department. These divisions have pushed numerous regulations designed to promote Christian Nationalism and a legal avenue for discrimination.

At a recent House Oversight and Reform Subcommittee hearing on “The Administration’s Religious Liberty Assault on LGBTQ Rights,” Evan Minton from California testified about how he was denied critical care at the Mercy San Juan Medical Center near Sacramento because of his gender transition. Minton remembers “being so devastated that I collapsed to the ground, I felt distraught and helpless that the hospital was refusing to treat me simply because of who I am.”

Minton’s story is becoming common in the Trump era. There’s the Miracle Hill Adoption case in South Carolina, for example, among many instances of religion-based discrimination in employment and health care. This type of intolerance is setting up a “separate but equal” system of legalized discrimination in the distribution of public services that allows publicly funded departments and service providers to pick and choose which members of the public they want to serve (the right kind of Christians) and which ones they don’t (everyone else).

The pro-secular majority in the House is pushing back. It is advancing the Do No Harm Act that would ban religious exemptions for publicly funded services. Congress is asserting itself in the budget and appropriations process. Rep. Jahana Hayes, D-Conn., is calling for the Christian Nationalist policy division at the Department of Health and Human Services to be defunded.  The Congressional Freethought Caucus co-chairs, Reps. Jared Huffman, D-Calif., and Jamie Raskin, D-Md., are calling for strong nondiscrimination language to be inserted into the non-defense appropriations bills and to deny funding for regulations and entities within departments that seek to discriminate using the guise of religious liberty.

The best protection against the Christian Nationalist agenda and religious exemptions is for it to be soundly rejected. If not, picture, in the near future, the worst day you are having, in an emergency room, in a medical system rife with religious exemptions, and then the humiliation and dire consequences of being told to go somewhere else. 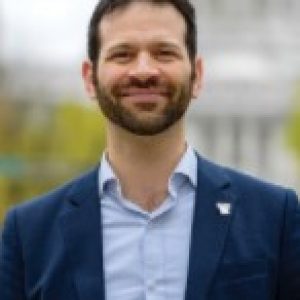 Mark Dann MARK DANN joined Freedom From Religion Foundation (FFRF) on May 20, 2019, as our first full-time director of governmental affairs. Dann previously worked as the director of governmental affairs for the Secular Coalition for America (SCA). He has also served as the federal affairs director at Compassion & Choices, an end-of-life advocacy group, and as a democracy development consultant with the National Democratic Institute in Moldova and Iraq. And he was a Peace Corps volunteer in Crimea before it was invaded by Russia. Mark will help raise the national profile of the Freedom From Religion Foundation in Washington, D.C., where he is based. Mark lives in Washington, DC with his husband Sultan Shakir. They have a Chihuahua/Jack Russell Terrier who as a finalist in this year’s Running of the Chihuahua's in DC.
All Articles by this author
PrevPreviousWhere do beliefs come from?
NextTheocrats, Trumpians, philosophy and beliefNext