The Crusades were a nightmare 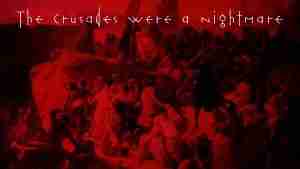 Some people think the Crusades were romantic quests by shining knights wearing crimson crosses — but they actually were a nightmare of slaughter, rape and looting. At the 2015 National Prayer Breakfast, President Obama triggered Christian fundamentalist outrage by saying that the Crusaders “committed terrible deeds in the name of Christ.”

After Pope Urban II launched the First Crusade in 1095 to wrest the Holy Land from “infidels” — declaring “Deus vult” (God wills it) — volunteer armies arose like mobs around Europe. Some in the Rhine Valley followed a goose they thought God had enchanted to guide them.

Other groups decided they should first kill “the infidels among us,” so they stormed Jewish ghettos and slaughtered inhabitants — giving some a chance to save themselves by converting to Christianity at swordpoint. Scholar Susan Jacoby has described in the New York Times how mobs slaughtered defenseless Jewish families — and how some Jewish mothers killed their own children rather than let them be ripped away by bloodthirsty Christians.

As the peasant armies traveled through the Balkans, they pillaged farms and towns for food, provoking battles with local peoples. In one clash, an army led by Peter the Hermit killed 4,000 Christian residents of Zemun in current-day Serbia, then burned nearby Christian Belgrade.

As the Crusaders reached the eastern end of the Mediterranean, they decapitated Muslims and carried the heads as trophies. During the siege of Antioch, 200 Muslim heads were catapulted over the walls into the city. Muslim defenders inside decapitated the city’s Christians and catapulted their heads outward.

When Jerusalem fell, almost every resident was slaughtered. Chronicler Raymond of Aguilers wrote proudly: “The horses waded in blood up to their knees, nay, up to the bridle. It was a just and wonderful judgment of God.” In a 2001 speech at Georgetown University, President Clinton commented: “When the Christian soldiers took Jerusalem [in 1099], they… proceeded to kill every woman and child who was Muslim on the Temple Mount.”

However, Muslims regrouped and eventually drove out the Crusaders. So a Second Crusade was launched, then a Third — and several more. During the Third Crusade, in 1191, Richard the Lionheart ordered 3,000 captives at Acre to be massacred. St. Bernard of Clairvaux declared: “The Christian glories in the death of a pagan, because thereby Christ Himself is glorified.”

The final Crusade was the Battle of Lepanto in 1571 when a papal fleet defeated a Muslim fleet. A Crusader named Miguel de Cervantes suffered a maimed arm. He later attained literary immortality when he wrote Don Quixote.

Incidentally, this Crusade was ordered by Pope Pius V, who openly preached slaughter. As Grand Inquisitor, he sent troops to kill 2,000 deviant Waldensians, followers of preacher Peter Waldo, in southern Italy. After becoming pope, he sent troops to fight Huguenot Protestants in France, telling commanders to kill all prisoners. And he revived the Inquisition to torture and burn Christian “heretics.” After his death, Pius was canonized a saint.

Perhaps the pope’s behavior qualified as saintly during the Crusades.

James A. Haught, syndicated by PeaceVoice, was the longtime editor at the Charleston Gazette and has been the editor emeritus since 2015. He has won two dozen national newswriting awards and is author of 12 books and 150 magazine essays. He also is a senior editor of Free Inquiry magazine and was writer-in-residence for the United Coalition of Reason.
All Articles by this author
PrevPreviousA somber reflection on abortion’s future after Texas ruling
NextIdaho potatoes, a Saudi blogger, mountaintop crosses and Oklahoma’s ‘official’ state bookNext