The Bill of Rights, a White House ‘takeover,’ and our man in D.C.

Every so often, the Freedom From Religion Foundation has to simultaneously tackle issues at several levels — national, state and local — and this week was one of those occasions.

We denounced a Christian Nationalist self-proclaimed “takeover” of the White House. (It seemed to be actually at a governmental building nearby.) Vice President Mike Pence showed up, and President Trump’s “spiritual counselor” Paula White was in the audience. “Welcoming a group of Christian Nationalists to carry out a governmental ‘takeover’ is deeply disturbing, since it shows a contempt for the foundational American principle of state-church separation,” said FFRF Co-President Annie Laurie Gaylor. 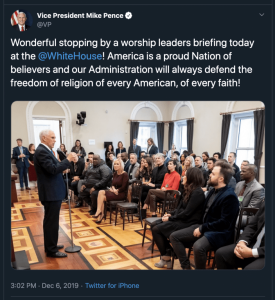 What the Dickens!
We have somebody defending your interests at this nation’s legislative seat, and he pens a lovely year-end review. Mark Dann is our director of governmental affairs, and he uses his favorite holiday classic, “Scrooged,” as a fulcrum to reflect on “where we were, where we are and where we are going to uphold our secular values through federal governmental affairs.” 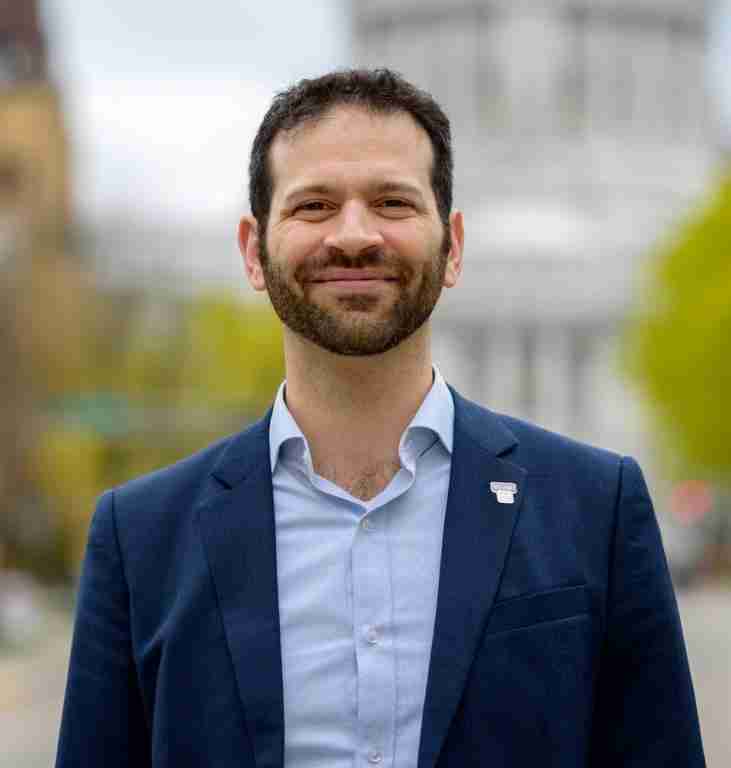 Mark joins FFRF Co-President Dan Barker and FFRF Director of Strategic Response Andrew Seidel on our “Ask An Atheist” Facebook Live feature to talk about all that he has accomplished on behalf of the secular community on Capitol Hill in the year gone by. Watch the show to learn exactly how (and there’s a bonus for dog lovers). 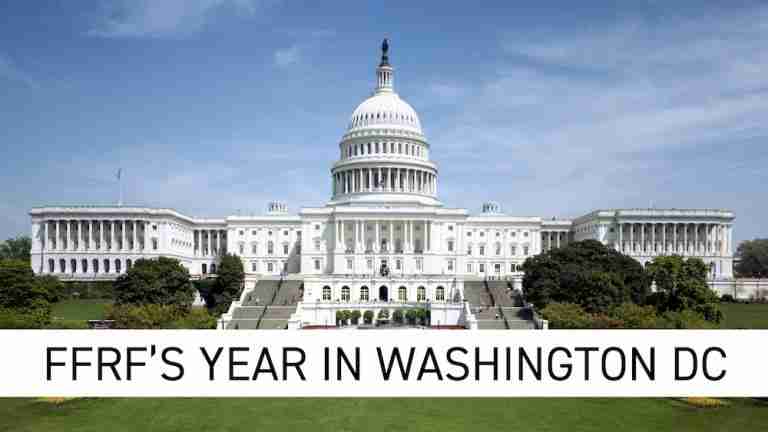 We need your help
There are a lot of important bills and rules in play in D.C., and we sometimes mobilize you for your help. The Trump administration is continuing its relentless attacks on civil rights with a new rule that would allow religious recipients of Department of Health and Human Services (HHS) funding to discriminate against LGBTQ individuals. Please weigh in! 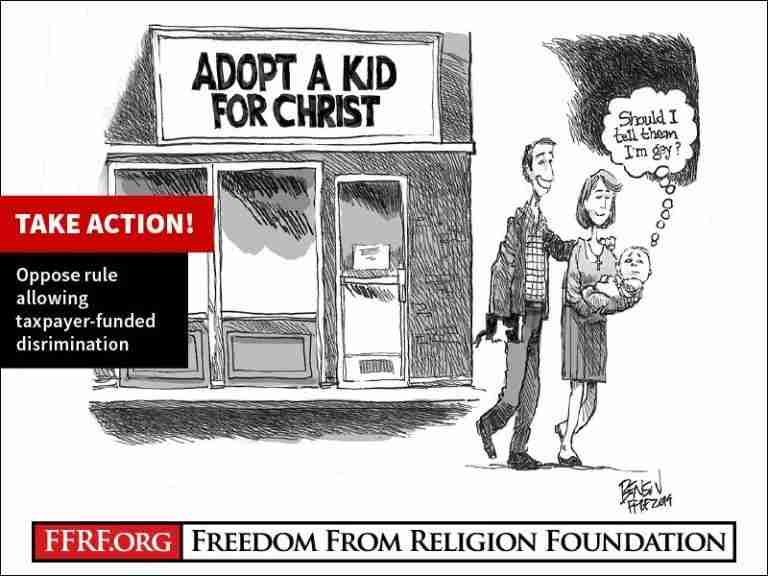 Show me the Constitution
The Show Me State has occupied some of our attention recently. The Missouri AG seems to lack a knowledge of the Constitution. After he advised a school district to disregard constitutional norms, we sent him a letter correcting his many erroneous claims. “We consider this advice, coming from the state’s chief law enforcement officer, to be shocking and irresponsible,” comments Annie Laurie.

Pay your taxes, friars!
We also focused on a city that lies adjacent to our hometown of Madison, Wis. A prime piece of real estate in Monona is owned by a Christian order that has not paid property taxes for years on that tract, in spite of not using it for religious purposes.

“The Madison-based Freedom From Religion Foundation wrote to the city of Monona earlier this week questioning the San Damiano Friary’s exemption from paying property taxes,” reports the Wisconsin State Journal. “The property, which is owned by a religious organization, has been exempt for several years, but the Freedom From Religion Foundation said it must be exclusively used by the religious organization to be exempt.”

FFRF Senior Counsel Patrick Elliott explains on our “Newsbite” segment what was at stake here — and why we intervened. 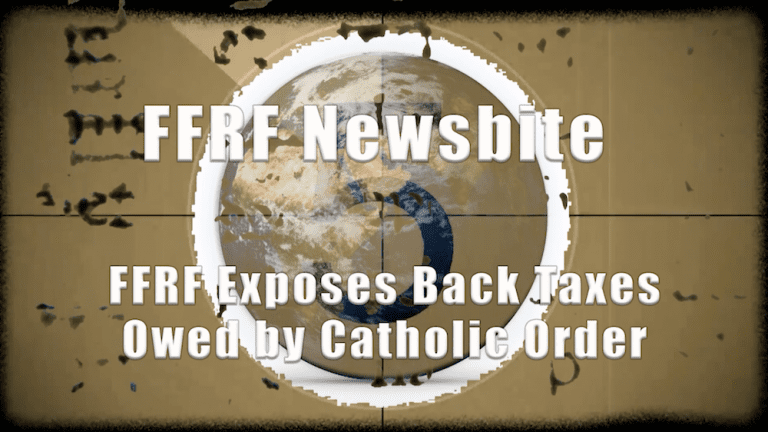 Celebrating the upcoming Winter Solstice
It’s at the local level that we make the freethought presence felt during the Winter Solstice season, and we are out in full force this year.

“If you’re in Chicago and walking through Christkindlmarket in Daley Plaza, make sure you take some pictures next to the atheist display that just went up,” writes Hemant Mehta on his Friendly Atheist blog. “The whole thing was put up by the Freedom From Religion Foundation’s Metropolitan Chicago chapter. It includes that 8.5-foot-tall scarlet ‘A‘ and a banner featuring a secular Nativity scene of sorts.” 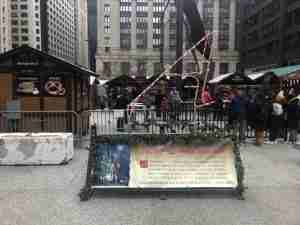 Tom Cara, the president of the Metropolitan Chicago chapter, chats with Dan and Annie Laurie on our radio show this week about the displays he helped erect in the Windy City. Our show also features a speech from Rachel Laser, President and CEO of Americans United for the Separation of Church and State, when she accepted FFRF’s Henry Zumach Freedom From Religious Fundamentalism Award at our recent convention. 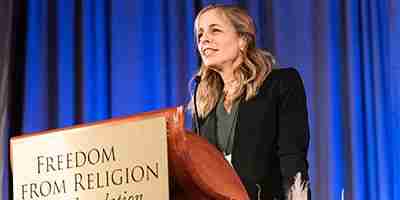 And observing the Bill of Rights with December displays
We also installed Bill of Rights displays in places as varied as the Iowa Capitol, the main square in Cleveland, and in front of a county courthouse in Illinois. The display reads: “At this Season of the Winter Solstice, join us in honoring the Bill of Rights, adopted on Dec. 15, 1791, which reminds us there can be no religious freedom without the freedom to dissent.” With Sunday being Bill of Rights Day, it’s an especially timely message! 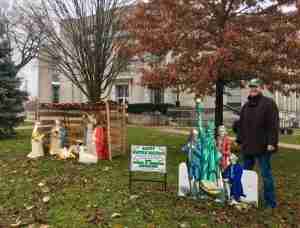 Lighten up with “Mrs. Betty Bowers, America’s Best Christian™”
With so much serious stuff going on, we need humor in our lives, and who better to lighten things up than “Mrs. Betty Bowers, America’s Best Christian. ™” On our “Freethought Matters” TV show this Sunday, Dan and Annie Laurie interview Andrew Bradley, creator of this character and the eponymous award-winning web series. “You never run out of material, particularly with the incarnation of evangelicalism right now in America,” says Bradley. The show includes some very funny “Mrs. Betty Bowers” clips. Check when you can watch it on TV. Or you can always catch it on YouTube. 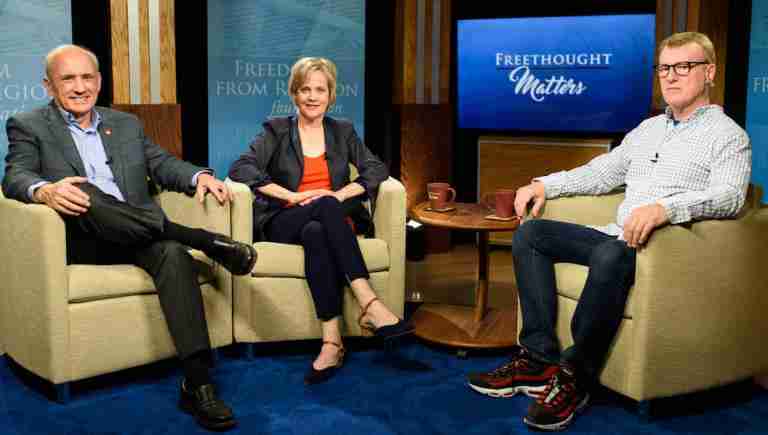 Whatever the tone, whatever the governmental level, the fact that we’re able to engage in all this hustle and bustle is solely due to you and your generosity.

All Articles by this author
PrevPreviousCorrecting politicians, surfing in the Times, displaying secularism & rewarding students
NextWinter Solstice celebrations and responsesNext