‘That was the week that was’ 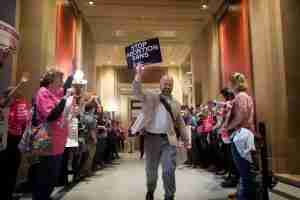 When I was a little girl in the early 1960s, there was a delightful satiric show on NBC my parents loved called “That Was the Week that Was.” I later realized it was peopled with incredible talent. The writers or cast included Tom Lehrer (“Vatican Rag”), Gloria Steinem, David Frost, Calvin Trillin, Alan Alda, Mike Nichols and Steve Allen.

Today, I’m looking at “The week or two that was” for standout news developments affecting state and church. First the bad news, then the good.

This week, the World Wildlife Fund issued a startling new “Living Planet Report” that shows most populations of the major animal groups — mammals, birds, amphibians, reptiles, fish — have dropped by nearly 70 percent since 1970.

“It is very much a red flag and a warning signal that the life support system on Earth is in trouble,” says Rebecca Shaw, chief scientist at the fund.

The driving force is not climate change, although humans are also responsible for that, but habitat loss due to food production and unsustainable diets. There are simply too many of us!

The biblical deity commands Adam and Eve in Genesis 1:28: “Be fruitful, and multiply, and replenish the Earth, and subdue it: and have dominion.” Boy, has humankind ever been obedient. The human population has gone from 3 billion in 1960 to 7.98 billion today. As the Worldometer reminds us, it took until 1800 for the world population to reach 1 billion, 130 years for the second billion, only 30 years for the third billion, 15 years for the fourth billion and only 13 years for the fifth billion.

Think about it: In 1970, there were roughly half as many people in the world as there are now. How can we preserve quality of life and ecological balance on our planet when Earth is overrun with overconsuming people? Yet we never hear talk of overpopulation anymore. Our smug species, after all, has dominion over the planet, and if we have to deforest and invade habitats to feed and shelter ourselves, sobeit.

Readers old enough to remember the Pogo cartoon strip will never forget the famous Earth Day cartoon of 1970, proclaiming ungrammatically, but accurately: “We have met the enemy, and he is us.”

Religion deserves blame for much of our species’ profligate reproduction. It not only posits us as the center and be-all of creation but insists “every sperm is sacred” and that women’s purpose is to breed.

Humans, we must do better, or we will leave our descendants a nearly uninhabitable planet devoid of that rich diversity of verdant and glorious life that has made Earth such a (potential) paradise.

One man, so much damage

The New York Times has run an exposé about the long reach of Federalist Society founder Leonard Leo. Wonder where that phony protest of critical race theory started or the backlash against “woke politicians” or schools that accommodate transgender children’s needs? Wonder who’s responsible for stacking the Supreme Court with an extremist supermajority willing to tear asunder Roe v. Wade?

Wonder no more. It’s due to Leo, an ardent Roman Catholic. We knew that the previous President Trump turned over the nominating process to the Federalist Society, after promising to appoint justices who would repeal Roe. But this report also tells us what we didn’t know about Leo — how he has set up a network of cozy nonprofit and for-profit entities infusing endless amounts of dark money to fight reproductive rights, LGBTQ rights, affirmative action, state/church separation, voting access and even climate change. (He’s leading a campaign against the investment firm BlackRock and other entities trying to combat global warming.) There’s a biblical dominionist for you.

Kudos to the 24 members of the Minnesota Legislature who last week publicly announced their new group, a Secular Government Caucus, whose official purpose is “to resist Christian nationalism and defend church/state separation.” Have I died and gone to freethought heaven?

Although two of the members are nontheists, the rest are religious (or nominally religious) allies, including Sen. John Marty, whose father was a Lutheran minister. Similar to the Congressional Freethought Caucus, the mission statement in part is to “promote public policy based on reason, science and moral values.”

Dan and I got to interview one of the four co-founders, Rep. Mike Freiberg, who identifies as an agnostic, on FFRF’s radio show this week. As Dan pointed out, why should a government body wishing to espouse “reason, science and moral values” even be considered controversial?

It’s heartwarming that the caucus’ purposes include “opposing discrimination against atheists, agnostics, humanists, seekers, religious and nonreligious people; championing freedom of thought and conscience.” How long freethinkers and nonbelievers have waited for such champions to represent us in government. May this inspire such caucuses in every state!

Did you know that last Tuesday (Oct. 11) was “Strike Out Queer-Phobia” Day, coinciding with National Coming Out Day? And that students at 100 religious campuses walked out of school, in part to protest religious exemptions to Title IX (allowing discrimination and erasure of LGBTQ students)? That’s pretty cool.

The Religious Exemptions Accountability Project has filed a lawsuit against the U.S. Department of Education on behalf of LGBTQ students at federally funded Christian colleges and universities. Says the project’s Director Paul Southwick, “They are done being told that in order to be a good Christian, that means you must be a white, straight Christian, or embrace white, straight Christian values.This is a crisis because the (university) boards are so out of sync with their youth that it will essentially be an inescapable crisis for them.”

Generation Z is rejecting haters — especially those who discriminate against LGBTQ individuals. We have seen this response for years in our student essay contests. Religious institutions ignore this at their peril.

The past week saw a major development by judges in two states — Ohio and Arizona — blocking anti-abortion bans. A week ago Friday, a judge in Ohio blocked Ohio’s six-week abortion ban for the duration of a court challenge. Hamilton County Common Pleas Judge Christian Jenkins wonderfully ruled that while the Ohio Constitution doesn’t explicitly mention abortion, it doesn’t have to in order to protect the right to one: “This court has no difficulty holding that the Ohio Constitution confers a fundamental right on all of Ohioans to privacy, procreation, bodily integrity and freedom of choice in health care decision-making that encompasses the right to abortion,” he said.

A few hours later, an appeals court in Arizona issued a temporary injunction against an abortion ban in that state dating to 1864, before Arizona was even a state. Presiding Judge Peter J. Eckerstrom ruled that a lower court erred by ignoring more recent abortion laws conflicting with the pre-statehood ban. That still leaves a recently enacted ban on abortion at 15 weeks of pregnancy in effect.

Speaking of walkouts, demonstrations (with the theme of “Women, life, freedom!”) continue in Iran, nearly a month after protests first began following the death of Mahsa Amini at the hands of morality police who thought her headscarf was too skimpy. Is it too much to ask not to be killed for showing a little hair?

And in our own country, as Christian nationalists threaten the rights and lives of women (and anyone who can get pregnant), it’s heartening to see record numbers  of women registering to vote. The Dobbs decision by our extremist Supreme Court (extremists handpicked by Leonard Leo and the Federalist Society) was a vicious kick in the stomach.

In many states, the deadlines to register to vote are approaching or past. Find out more about your right to vote. Then vote like your rights depend on it, because they do.

Annie Laurie Gaylor is co-president of the Freedom From Religion Foundation. She co-founded FFRF in 1976 as a college student with her mother Anne Nicol Gaylor. She served as the editor of FFRF’s newspaper, Freethought Today, from 1985-2009. She became FFRF co-president with Dan Barker in 2004. Annie Laurie has authored three books for FFRF: Woe to Women: The Bible Tells Me So; Woe to Women: The Bible Tells Me So; and Women Without Superstition: “No Gods – No Masters”, the first anthology of women freethinkers.
All Articles by this author
PrevPreviousA brilliant skeptic who wrote timeless novels
NextOur amicus brief, Christian nationalism, abortion rights and Christ’s last temptationNext