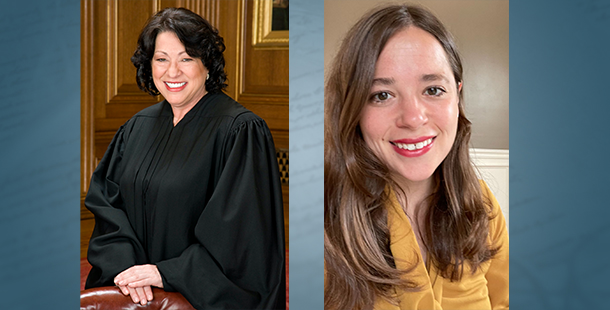 Justice Sonia Sotomayor, you don’t know about me, but I know about you.

As a woman with family from Puerto Rico, I remember feeling an overwhelming sense of pride when President Obama appointed you, the first Latina, to the highest court in the country.  I remember my grandfather shedding tears of joy that a Puerto Rican finally made it to the Supreme Court. And I remember how you so boldly proclaimed that you “strive never to forget the real world consequences of [your] decisions on individuals, businesses and government.” I remember pressing your autobiography, My Beloved World, into the hands of those who asked for an electrifying and inspirational memoir of triumph. And just as those moments are seared into my memory, I will also never forget how you have so fiercely stood up for abortion rights in one of the most pivotal reproductive rights hearings in Supreme Court history.

Like you, I was raised Roman Catholic. And like you, I was a lapsed Catholic for many years who only attended mass for weddings and funerals before I officially embraced secularism. Unlike you, I hold no public office and I have no law degree. But I can understand how the familial and cultural underpinnings of Catholicism can place a stronghold on individuals who were raised in the Church. That is why I greatly admire those in positions of legislative and governmental authority who are able to set aside those personal and religious ties and put an emphasis on true democracy. You are one of those people — and you did just that during yesterday’s oral arguments in Dobbs v. Jackson Women’s Health Organization. I will never forget that.

Last week, I was in Washington, D.C. — a short pit stop on a road trip to visit my aunt and uncle in North Carolina. While there, I stood in front of the Supreme Court and gawked at its imposing presence. I walked up the steps to its tall doors, passing the statues marked Contemplation of Justice and the Guardian of Law. I knew that in exactly one week a consequential oral hearing was to take place — a hearing that would set into motion the future of abortion rights in this country. I hoped that justice and law would prevail.

One week later and hundreds of miles away in Wisconsin, I listened to Mississippi Solicitor General Scott Stewart argue that my reproductive rights should be stripped away. And as I listened breathlessly, I received a text message from my sister: “I can’t believe we’re about to lose Roe.” Like countless women across the country who were listening, our hearts broke and our anger furied as we heard Stewart and several justices so callously and ignorantly disregard our bodily autonomy. We wondered: How, in 2021, was this even worth arguing?

As tears welled up in my eyes and my heart quickened, I heard your voice. Your strong, clear voice was like an anchor that we needed in these perilous waters. You asked the solicitor general, “How is your interest anything but a religious view? … The issue of when life begins has been hotly debated by philosophers since the beginning of time. It’s still debated in religions. So when you say this is the only right that takes away from the state the ability to protect a life, that’s a religious view, isn’t it?” I pumped my fists in the air.  And then, perhaps in the most poetic moment of the hearing, you questioned: “When does the life of the woman, and putting her at risk, enter the calculus?” I let out a cheer in my home office — one that nobody heard except for my two dogs. And, yet, I had the feeling that women across the country were cheering alongside me. My sister texted me, “She’s speaking for us!” At that exact moment, I knew that I wasn’t alone.

You were speaking for us, Justice Sotomayor. And for that I will always be thankful. I don’t know what the court’s decision will be in 2022. Yet I fear that your voice of reason will be in the minority and I fear that abortion rights will be deciminated. My heart breaks for that future. It breaks for women of the past who fought so valiantly for abortion rights and it breaks for women of the past, present and future who lack the support and resources to have an abortion.

But I will relentlessly fight in the ways that I can for access, equality and reproductive justice. And as I do so, I will never forget your steadfast defense for reproductive rights and the separation of state and church.

BARBARA ALVAREZ is a contributing writer for the Freedom From Religion Foundation. Previously she had held the role as FFRF's inaugural Anne Nicol Gaylor Reproductive Rights Intern, a program set up to memorialize FFRF’s principal founder, who was an early abortion rights activist and author of the book Abortion is a Blessing. Barbara was a major winner in FFRF’s essay competition for graduate students, writing about the bible’s role in the abortion battle.
All Articles by this author
PrevPreviousReport shows anti-abortion restrictions rule Southern hospitals
NextBeing a seeker, not a finderNext