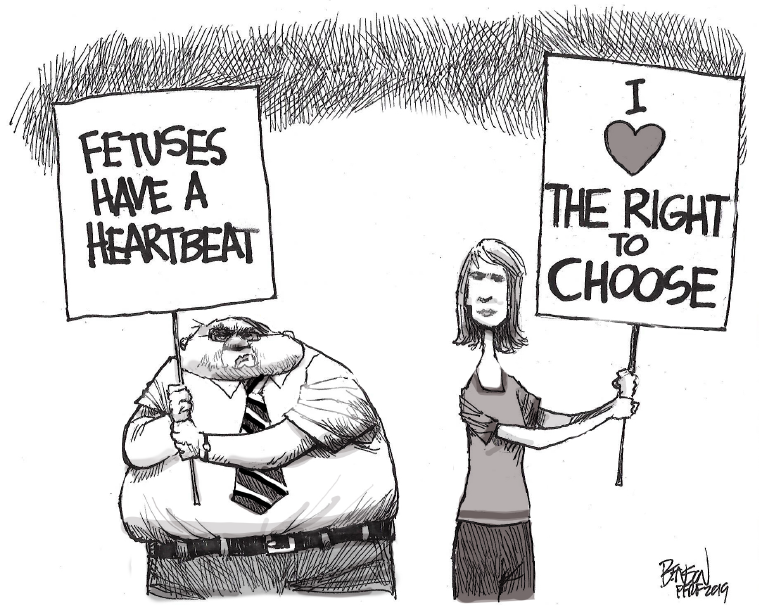 In May, Gov. Greg Abbott signed a so-called “fetal heartbeat” bill that bans abortions at just six weeks gestation — before most women even know that they are pregnant. At the bill-signing ceremony, Abbott openly proclaimed his religious motivations: “Our creator endowed us with the right to life, and yet millions of children lose their right to life every year because of abortion.” In a harmful twist, this ban, set to take effect on Sept. 1, allows private citizens to sue abortion clinics, providers, and anyone who helps someone procure an abortion after the so-called “fetal heartbeat” is detectable. Shockingly, the person would not have to be connected to someone who had the abortion or to the abortion clinic in order to sue. It awards the suing individual $10,000 per illegal abortion upon success.

It is important to note that “fetal heartbeat” is a misnomer. Dr. Ted Anderson, president of the American College of Obstetricians and Gynecologists, an organization that represents 58,000 physicians across the country, reports that such phrases “do not reflect medical accuracy or clinical understanding” and that it is not a heartbeat, but rather “induced flickering of a portion of the fetal tissue.” However, medical accuracy and scientific evidence is irrelevant to Christian nationalists like Abbott, who seek to impose their worldview on a secular nation.

While six-week abortion bans in other states have been blocked through the court system, the Texas law is difficult to challenge because “it is hard to know whom to sue to block it.” Nevertheless, abortion rights advocates and providers have just filed a federal lawsuit seeking to block the pending law. They are asking a federal judge to prevent any of the state’s trial court judges from enforcing the measure and to block county clerks from accepting any abortion bounty lawsuits.

More than 370 Texas lawyers have also signed an open letter opposing the new legislation, stating that “this bill does nothing to protect women’s health” and “further marginalized communities already experiencing hardship.” Travis County Attorney Delia Garza underscores the horror of this bill, explaining that “it could even allow a rapist to sue a doctor for providing care to a sexual assault survivor and for the rapist to recover financial damages — allowing predators to profit off of their assault.”

In an interview with the New York Times, New York University Professor Melissa Murray describes how this bill violates the privacy of women, a central component of Roe v. Wade: “If the barista at Starbucks overhears you talking about your abortion, and it was performed after six weeks, that barista is authorized to sue the clinic where you obtained the abortion and to sue any other person who helped you, like the Uber driver who took you there.”

This legislation is a grotesque demonstration of just how little the Religious Right cares about the health of women. After all, anti-abortion extremists have introduced abortion bounty-hunting. As the ultraconservative Supreme Court is slated to hear a major anti-abortion bill that could overturn Roe v. Wade, it is chilling to consider what may become of abortion access in the United States.

There has never been a more urgent time for Congress to pass the Women’s Health Protection Act, which would render these medically unnecessary anti-abortion measures null and void. We urge you to contact your representative and senators to ask them to sponsor and vote for the act.

Our secular voices are needed more than ever.

BARBARA ALVAREZ is a contributing writer for the Freedom From Religion Foundation. Previously she had held the role as FFRF's inaugural Anne Nicol Gaylor Reproductive Rights Intern, a program set up to memorialize FFRF’s principal founder, who was an early abortion rights activist and author of the book Abortion is a Blessing. Barbara was a major winner in FFRF’s essay competition for graduate students, writing about the bible’s role in the abortion battle.
All Articles by this author
PrevPrevious2021 is the worst year for abortion rights
NextChristianity is collapsingNext