When Principal Kara Trevino of Patterson Middle School in Killeen, Texas, recently removed a poster featuring a bible passage from the school’s main hallway, she cited concerns that the poster violated the separation of church and state. That was a good call, since the poster featured Linus from Charlie Brown and the proselytizing message: 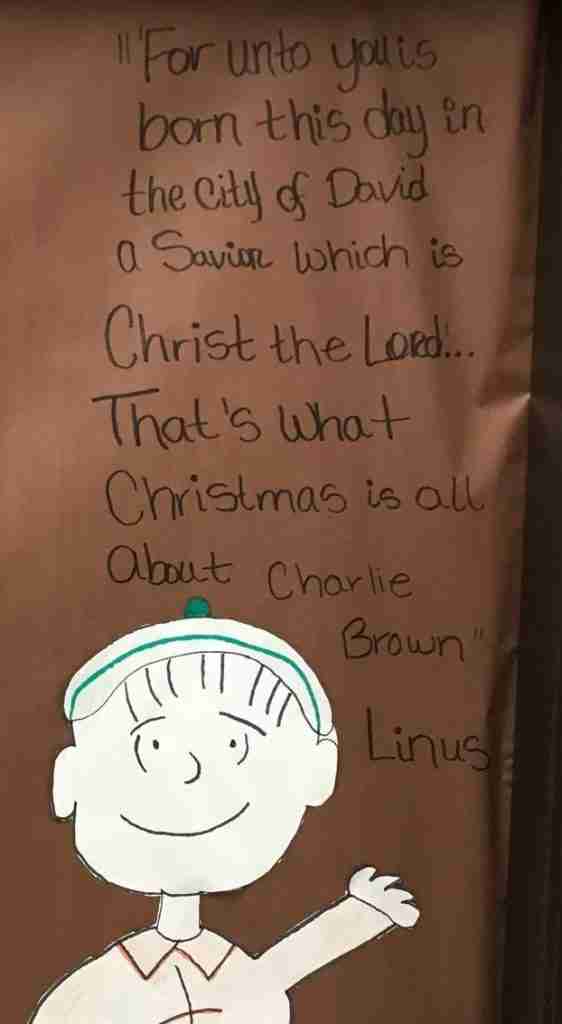 “For unto you is born this day in the city of David a savior which is Christ the Lord. That’s what Christmas is all about, Charlie Brown” – Linus

When Texas Attorney General Ken Paxton got wind that a public school administrator was trying to keep her school a welcoming place for all students, including minority religious and nonreligious students, Paxton took up arms, calling the decision an “attack on religious liberty and a violation of the First Amendment.” Paxton followed up his statement with a letter to the school district, which cited no case law, but nevertheless urged the district to rescind its “unlawful policy” and “move back into compliance with state and federal law.”

I responded to Paxton’s initial outrage with a letter on behalf of the Freedom From Religion Foundation, congratulating Principal Trevino and Killeen Independent School District for their resolute stance protecting the right of conscience of their students. FFRF’s letter cites numerous cases holding that school employees must not promote their personal religious beliefs to students, including through religious displays. The law is firmly established and unambiguous on this point. Public school employees cannot post proselytizing messages on school property.

But if this is such a no-brainer from a legal perspective, then why did the attorney general of Texas write a letter to the contrary? Supporting religious promotion by the government appears to be a passion of Paxton’s, who has supported judge-organized prayer in courtrooms and encouraged city-sponsored nativity displays.

In his most recent letter, Paxton ignores the Constitution entirely, and instead cites Texas’s “Merry Christmas Law,” passed in 2013, as prohibiting the removal of a proselytizing message from school property. The problem with that analysis, as Paxton presumably knows, is that state law cannot overwrite the U.S. Constitution.

The whole point of Texas’s ill-conceived Merry Christmas law was to embolden public school employees to violate the Constitution. Now, Paxton is fuming because some of them weren’t fooled by the tactic.

On the heels of FFRF’s letter, the Christian advocacy group Texas Values sent its own letter to Killeen school officials, decrying their decision. The group called the district’s suggestion that the poster promoted the employee’s personal religious beliefs “hyperbolic and defamatory.” It is neither. The employee who put up the display even stated that she wouldn’t keep it up without the religious quote because, “That’s the whole point of why it was put up.”

Like the attorney general’s letter, Texas Values cites no legal precedent for a school district allowing proselytizing messages in its hallways. Both letters lament the fact that Texas’s Merry Christmas law was unable to do what it was intended to do: confuse public schools into violating the Establishment Clause.

Both letters are nonsense, but Paxton’s letter is also alarming. His demonstrated willingness to ignore well-established constitutional principles in order to further his exclusively pro-Christian agenda should be troubling to all Texans, not just those in the religious and nonreligious minority. As FFRF’s letter to Killeen concluded, “True religious freedom cannot be had without freedom from governmental religious endorsements. We hope that some day Attorney General Paxton will come to share the views of our country’s Founders on this point. Until that time, we applaud Killeen for protecting its students’ rights.”

Sam Grover received his B.A. in philosophy and government from Wesleyan University in 2008. He first worked for FFRF in 2010 as a legal intern while attending Boston University School of Law. In 2011, his article on the religious exemptions in the Affordable Care Act’s individual health insurance mandate was published in the American Journal of Law and Medicine. After receiving his J.D. from Boston University in 2012, Sam worked as a law clerk for the Vermont Office of Legislative Council where he drafted legislation on health care, human services, and tax issues. He returned to work as a constitutional consultant for FFRF in the fall of 2013. Sam has written a paper on counterterrorism and the law that was published by the Memorial Institute for the Prevention of Terrorism in Oklahoma City and has traveled to southern Africa to work under Justice Unity Dow of Botswana’s High Court.
All Articles by this author
PrevPreviousWe were engaged in rapid response
Next’Tis the season …Next