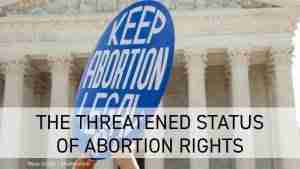 The U.S. Supreme Court has struck another blow against women’s rights.

The Food and Drug Administration (FDA) has a politically motivated requirement that a woman receive medication for an abortion in-person at a hospital or clinic, not via telemedicine or pharmacy pick-up. In May, the American College of Obstetricians and Gynecologists, along with  the Council of University Chairs of Obstetrics and Gynecology, New York State Academy of Family Physicians and SisterSong Women of Color Reproductive Justice Collective, sued the FDA, contending that this was a needless imposition during a global pandemic. Judge Theodore Chuang of the Federal District Court of Maryland agreed.

However, on Tuesday, Jan. 12, behaving as though it was a national emergency by issuing the ruling after hours, the Supreme Court chillingly reinstated the abortion pill restriction in a 6-3 decision. As the first abortion case to come before the newly ultraconservative court that includes Justice Amy Coney Barrett, a figure who has been vocal about her religously rooted anti-abortion ideology, this ruling is unfortunate, but expected. American Civil Liberties Union lawyer Julia Kaye noted that the decision “rejects science, compassion, and decades of legal precedent.”

Interestingly, the court’s order was unsigned. But we know that Chief Justice John Roberts, previously a swing vote on recent abortion cases, sided with the ultraextremist majority, because he was the only member of the majority to provide an explanation. He failed to mention the undue burden that this standard imposes on women, particularly amid a global pandemic that has claimed more than 385,000 lives in the United States. Rather, he questioned the district court’s order to lift the FDA restrictions, writing “my view is that courts owe significant deference to the politically accountable entities with the ‘background, competence, and expertise to assess public health.’” Justices Stephen Breyer, Elena  Kagan and Sonia Sotomayor dissented.

Just to make it clear, there is no scientific or medical basis to restricting abortion medication. Research has shown that these restrictions have no health benefits and that medication abortion is extremely safe.

The Supreme Court ruling is a representation of the increasingly present “shadow docket.” Coined by University of Chicago Law Professor William Baude, shadow docket refers to “a range of orders and summary decisions that defy [the court’s] normal procedural regularity.” Shadow dockets are typically handed down without any explanation from the majority and often come from emergency requests, like the emergency request by the Trump administration to overturn the lower-court injunction. Because of the nature of shadow dockets, the court can grant swift, immediate relief with limited briefs that are rarely argued before the justices. These shadow dockets often harm the most vulnerable of communities, such as low-income immigrants and their ability to enter the United States or victims of persecution seeking asylum.

As University of Texas Law Professor Steve Vladeck tweeted, this latest shadow docket was “a sign of how much #SCOTUS has diluted its standard for emergency stays.” He questioned: “What ‘irreparable harm’ does the government suffer because more women have easier access to this medicine?”

And while President-elect Joe Biden is expected to remove the FDA policy that restricts medication for an abortion, unfortunately the court’s ruling is a harbinger for future abortion cases and the standard according to which they will be decided. While national politics are taking a more progressive turn following the outcomes of the presidential election and the Georgia senatorial races, we are still facing a hostile federal judiciary, one-third of which has been nominated by the outgoing president after meeting Christian Nationalist litmus tests. This decision serves as a reminder that Christian Nationalism is not just rhetoric — it has a real impact on legislation and judicial rulings. Secularists must stay vigilant to ensure the separation of state and church in all arenas of democracy.

In the meantime, we can support abortion funds like the Women’s Medical Fund of Wisconsin, which was co-founded by FFRF’s principal founder, Anne Nicol Gaylor. Gaylor oversaw this fund as a volunteer from the late 1970s until her death in 2015. The fund annually helps an average of 900-1,000 Wisconsin residents without means exercise their constitutional rights under Roe v. Wade. Donations are deductible for income-tax purposes.

BARBARA ALVAREZ is a contributing writer for the Freedom From Religion Foundation. Previously she had held the role as FFRF's inaugural Anne Nicol Gaylor Reproductive Rights Intern, a program set up to memorialize FFRF’s principal founder, who was an early abortion rights activist and author of the book Abortion is a Blessing. Barbara was a major winner in FFRF’s essay competition for graduate students, writing about the bible’s role in the abortion battle.
All Articles by this author
PrevPreviousThe craziness of 50,000 religions
NextChristian Nationalist rioters, Ron Reagan, a revered philosopher and a preteen authorNext