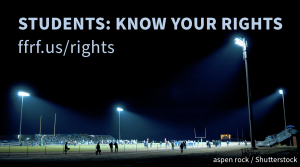 We at the Freedom From Religion Foundation have recently been in the midst of important campaigns.

We’ve sent a letter out to each and every school district in over a dozen states with troubling track records on religion in the schools, warning them not to trample on student rights by misinterpreting a troubling recent Supreme Court decision (Kennedy v. Bremerton). The scope of this ruling is exceedingly narrow, we are contending in a memo we have dispatched to more than 6,100 school districts in 14 states: Alabama, Florida, Georgia, Illinois, Indiana, Kentucky, Michigan, Missouri, North Carolina, Ohio, Pennsylvania, Tennessee, Texas and West Virginia. (The Florida memo was co-signed by our chapter there, the Central Florida Freethought Community.) The campaign includes an online “Know Your Rights” resource webpage and brochure for students. FFRF’s website also offers a handy wallet-sized card for students to print out and carry with them.

“Theocratically minded groups and people are attempting to take advantage of the egregious Supreme Court ruling,” says FFRF Co-President Annie Laurie Gaylor. “We’re doing all that we can to make certain that student rights are respected.”

The other side is taking notice. A right-wing Alabama news site has given the campaign major (and surprisingly polite) coverage.

Florida news portal reports on our amicus brief
A more mainstream Florida news portal has reported at length on another big recent step we took concerning the Sunshine State: our filing of an amicus brief against the specious assertion of a Christian school there that it be allowed to broadcast prayers over the PA system at state championships. Read more here (with the witty headline “Amen to that”).

Our scientific billboard in Toledo 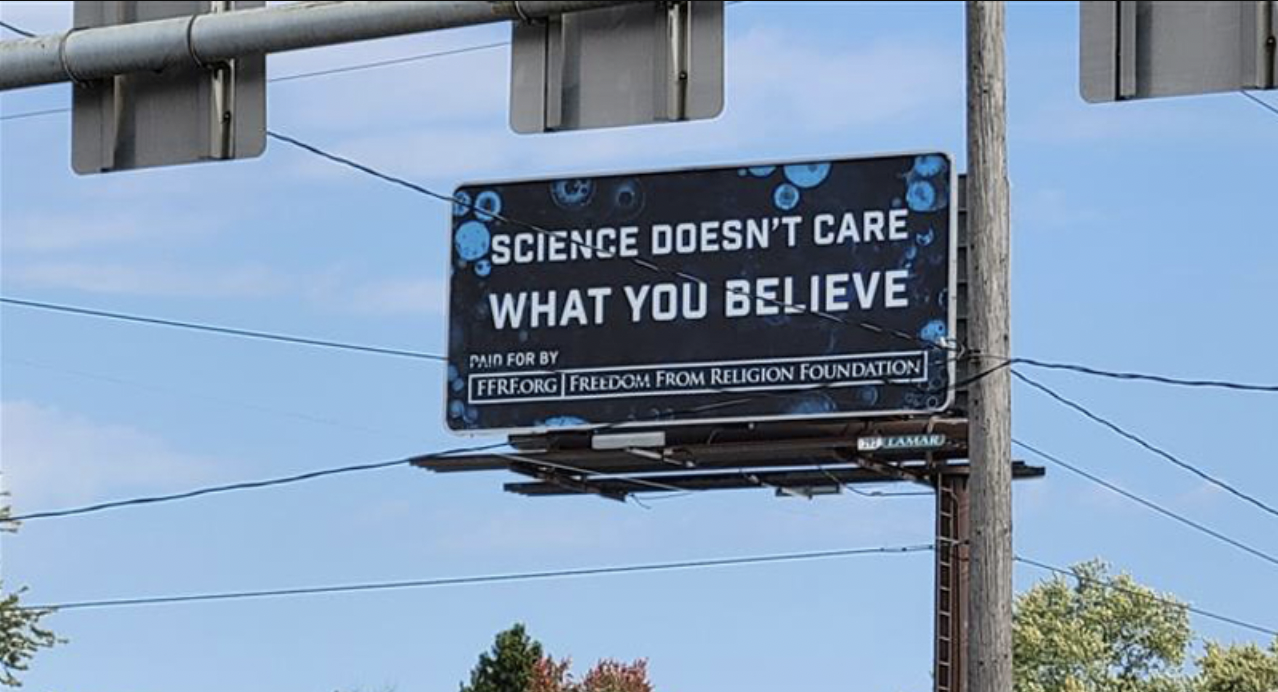 We’ve put up a billboard in Toledo declaring the truth of science. A local FFRF member, Lloyd Jones, a retired biology professor from the University of Toledo, suggested and generously paid for the billboard message because “right now there’s a lot of anti-science out there and it’s causing people to have mistaken beliefs.” Thank you, Lloyd!

An ongoing project of ours is to highlight the increasing threat from Christian nationalism — and we’re gaining allies in our effort. On our Facebook Live “Ask an Atheist” feature, Annie Laurie and FFRF Director of Governmental Affairs Mark Dann talk to Katy Joseph from Interfaith Alliance about how portions of the religious community are standing up to Christian nationalism. Watch the absorbing conversation here. 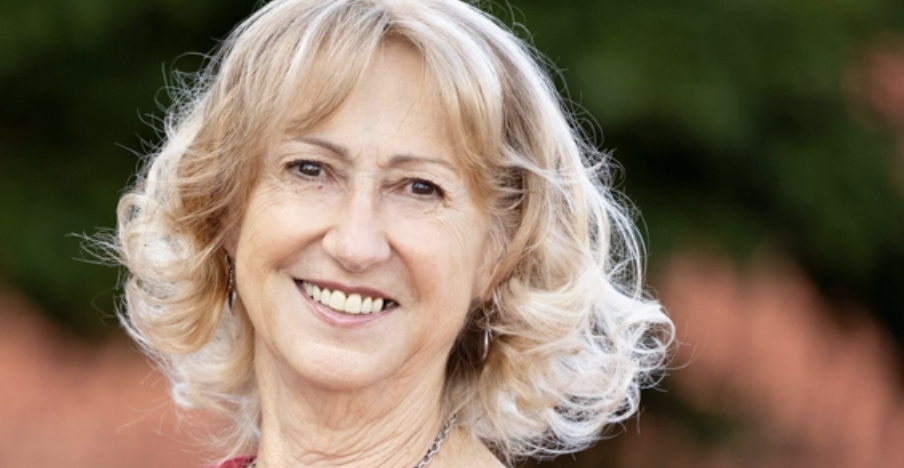 We’re increasingly finding allies in somewhat unexpected places. Legislators in statehouses, for instance, have started organizing secular caucuses. Last week on our radio show, we interviewed a co-founder of such a caucus in the Minnesota Legislature, and this week Freethought Radio co-hosts Dan Barker and Annie Laurie Gaylor speak with New Hampshire state Rep. Sherry Dutzy, who has formed the Secular Values Legislative Caucus in her state and is on the board of the new Association of Secular Elected Officials. These are exciting developments!

An Ala. school district listened to us

Of course, we’ve engaged in a bunch of interventions on behalf of the Constitution.

Reprimand a religion-imposing teacher who took his students to listen to a sermon, we urged an Alabama school district. “It is unconstitutional to take away instructional time from students to expose them to a Christian proselytizing preacher,” our letter stated. We’ve already received word that our letter and press release have had the desired effect: The district says that it has addressed the issue. Yay!

Remove ‘Judeo-Christian values’ from preamble
We also insisted that a Tennessee county board remove blatantly sectarian religious language from its preamble. “It is not only unconstitutional but it betrays an exclusionary mindset for a governmental body to proclaim an official adherence to any set of religious values,” Dan Barker remarked.

An atheist minister is our TV show guest Sunday 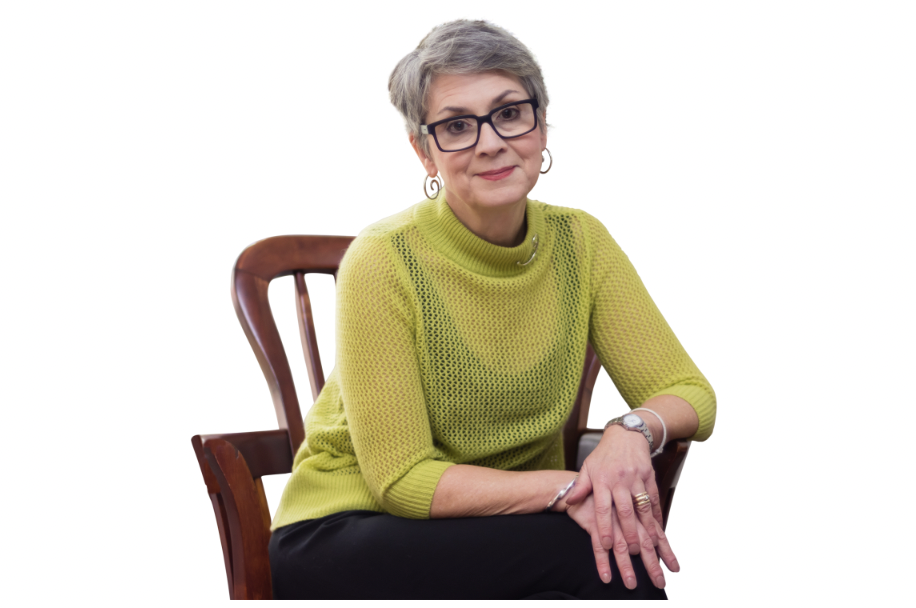 Our “Freethought Matters” TV show guest this Sunday is a pastor of the most unusual kind: an atheist pastor. When Gretta Vosper, pastor of West Hill United Church in Toronto (part of the United Church of Canada), announced to her congregation that she’d become a nontheist, then later on that she’d become an atheist, she was charged with heresy, but what happened next was unexpected. You can already watch the show on our YouTube channel to find out what transpired. Or see where you can catch it on television Sunday.

Heads up on next week’s programming
Watch for the return of FFRF’s advertisement by Ron Reagan, the “unabashed atheist not afraid of burning in hell,” on Rachel Maddow’s show next Monday, Oct. 24. The ad will also play on Monday, Tuesday and Wednesday over the next three weeks on “The Daily Show.”

Since we’ll be in San Antonio at the national convention next week, there will be no “Ask an Atheist” on Facebook Live. But don’t miss next week’s compelling guests on Freethought Radio, which drops Thursday afternoons:  Maryam Namazie, passionate Iranian-born secular advocate, who’ll talk about the protests against theocracy and women’s subservience in Iran, and Aidan Scully, who’s received FFRF’s $2,000 student activist award for inaugurating a biweekly column on Christian nationalism in the Harvard Crimson.

The guest on next week’s TV show, “Freethought Matters,” which airs in 13 cities on Sundays and goes up on Thursdays on FFRF’s YouTube channel, will be Texan secular activist Aron Ra, speaking about how to counter creationism.

FFRF Contributing Writer Barbara Alvarez in her ongoing coverage of abortion rights puts the spotlight this week on how Catholic hospitals are a major impediment on that front. Noting that Catholic hospitals now control about one in seven hospital beds in the United States, she writes, “There is no room for religious doctrine in health care procedures. And yet we are seeing religion increasingly intrude into health care throughout the country.”

We agree with Barbara and, in fact, take that further. There is no room for religion in the public, secular sphere. That’s why — with your invaluable support — we’re working day in and day out toward achieving that goal.

AMITABH PAL is the Communications Director of FFRF. Prior to joining in February 2016, he was the Managing Editor of The Progressive magazine for more than a decade. He was also the editor of the Progressive Media Project, an affiliate of The Progressive that sends out op-eds through the Tribune Wire Service to hundreds of newspapers in the United States and other countries. Pal has appeared on C-SPAN and BBC and television and radio stations all over the United States and abroad. His articles have been published in school and college textbooks in the United States and Australia. Pal teaches a course at Edgewood College in Madison, Wisconsin. He has a Master's in Journalism from the University of North Carolina and a Master's in Political Science from North Carolina State University.
All Articles by this author
PrevPreviousKeep Catholicism out of health care
NextImaginary witches and godsNext